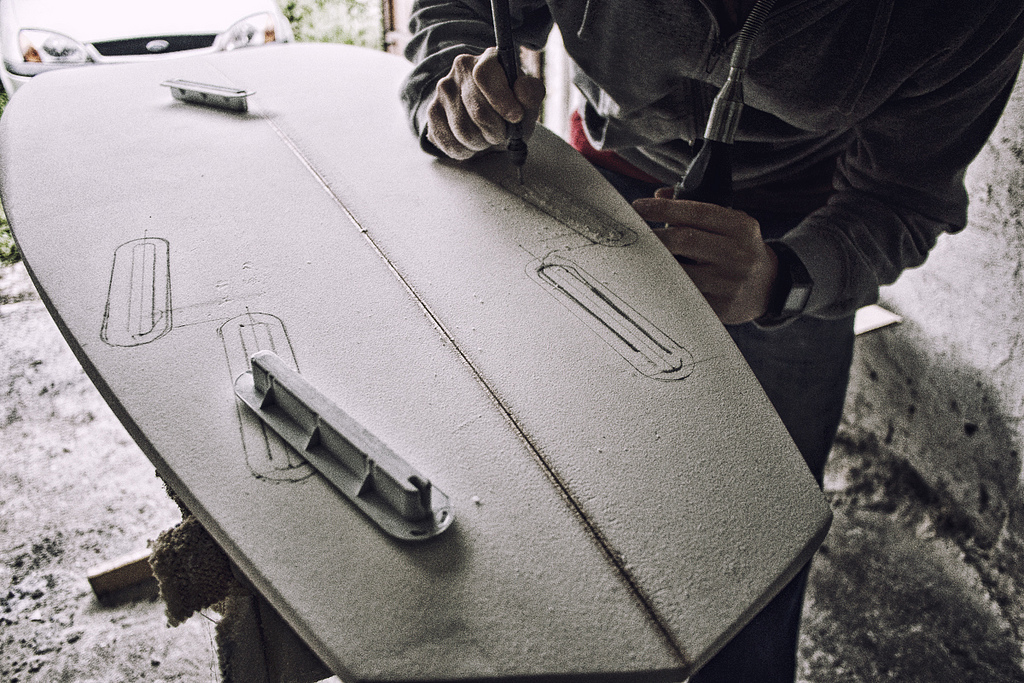 I first stood up on a surfboard not long after I learned to walk. But until recently, I’d never shaped my own surfboard, personally molding it and altering its design, the way so many surfers do. I was oblivious to the painstaking craftsmanship that goes into a board. If I grew an inch, I got a board an inch bigger. All I knew was if a board rode well, I liked it.

And so I had never learned the story of how the art of surfboard shaping had recovered from a threat to its existence.

December 5, 2005 was what surfers have since called Blank Monday. It was the day the surf foam ran out.

Before that day, Gordon “Grubby” Clark was supplying 90 percent of the market. He had perfected the art of molding polyurethane into what’s called a “blank,” a piece of foam in the rough shape of a surfboard. Blanks are what “shapers” take and then cut, plane, and sand into surfboards of various shapes and specifications. Once shaped, the foam board is sealed with fiberglass and resin, making it water-repellent and buoyant in the surf.

Clark Foam was a household name for surfers and surfboard shapers. Then, on that December day, when Grubby shut down, he became infamous. He even erased his recipe: he had the molds of his blanks destroyed.

No one knows for sure why Grubby did it—he hasn’t given an interview in 30 years—but, according to friends and news reports, he was worried about litigation because of the hazards of his materials.

Grubby’s shutdown paralyzed the surfboard trade. The price of a foam blank doubled, and prices for shaped surfboards skyrocketed. Nobody knew where boards or blanks could be found. Some thought they would be riding plastic boards. Everyone knew that an era had come to a close.

By leaving the surfing world to its own devices, Grubby ushered in a new age for experimentation in surfboard making. To be sure, mass-produced boards have partly filled the void; Costco now sells surfboards. (It seems sacrilegious to some surfers, but Costco boards can be fun on a summer day.) And some companies stepped in to produce knock-offs of the old Clark Foam boards. But innovators have also come up with altogether new boards.

One emerging giant is Firewire Surfboards, which recently joined the ECOBOARD Project, an initiative by the nonprofit SustainableSurf.org that aims to verify the eco-friendliness of surfboards. Firewire’s boards have an expanded polystyrene foam core and use epoxy resin. Firewire claims the boards have achieved a “50-fold reduction” in the quantity of volatile organic compounds released over a five-year lifespan in comparison to the traditional polyurethane and fiberglass boards. Firewire also has faced a backlash—some surfers love the new boards, some hate ’em—but they indisputably represent environmental progress for the surfboard trade.

The hand-shaped board also has seen a revival, much like vinyl records in a sea of MP3 players. There are now schools that teach the art of surfboard shaping, including one near my student housing at Loyola Marymount University in Los Angeles.

With a quick e-mail and swipe of my credit card, I recently signed myself up for a couple of three-hour lessons. My surfboard-shaping sensei, Florian Saylor, the owner of Shaper Supply Company, started making boards when he was a kid. He seemed to be perpetually covered in foam dust.

During my first lesson, as Saylor and I chatted about what I wanted to make, we sat in the shop and watched a surf flick projected on the wall. I asked Saylor where the blanks are coming from in this post-Clark Foam world. “Mexico,” he said, explaining that there aren’t as many environmental restrictions there.

In the shaping bay—a small room lit with fluorescent lights and a sawhorse-like fixture in the middle—I traced out the outline of my board-to-be on the crude foam blank. Then I was instructed to cut out the template with a handsaw. Next, we reduced the thickness with an electric planer that shocks the user at random—an unintentional but effective reminder to pay attention. After planing, it was time to sand by hand. While the foam was delicate, Saylor encouraged me to be rough with it.

Saylor said that when a blank has been flexed and pressed on, it’s more responsive in the water. “Most of the big-name shapers are using computers,” Saylor told me. “Hand-shaped boards are springier. Pushing on them gives them life out in the water.”

For me, shaping the rails—the critically curved edges of the board—by hand was hardest. It is essential to get each side nearly the same as the other. Saylor and I constantly circled the blank, groping and running our hands down the rails, until we thought they were perfect.

In the end, I was surprised. It looked like it was going to be a great board. Even Saylor, the veteran shaper, was impressed. It was sent off to get fiberglassed, and I impatiently waited a week and a half for the return of my creation.

When I finally picked up the finished product, I couldn’t wait to get it wet. I normally add some sort of artwork to my boards, but I decided to leave this one blank; it already had my personal touch all over it. My first hand-shaped board was and will remain purely white. And because of its sentimental value, it will not leave my always-changing board rack. It will be a survivor—just like traditional surfboard shaping.