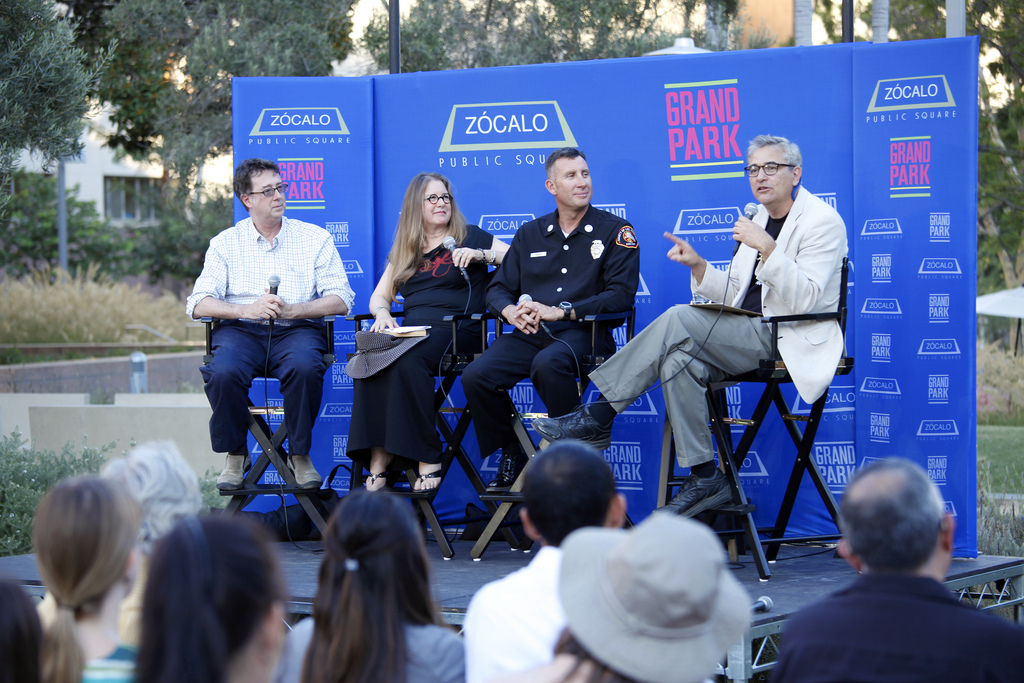 You know them when you feel them, or when you hear them blowing through the trees. They’ve cut out your power or even threatened your home. And you can quote Los Angeles writers Raymond Chandler and Joan Didion on their power to inspire murderous thoughts and unease. But what exactly are the Santa Ana winds? How do they wreak destruction on Southern California? And why have their legends persisted?

At a Zócalo event on a warm Friday evening at downtown’s Grand Park, UCLA meteorologist Robert Fovell, L.A. County Fire Captain Drew Smith, and novelist Janet Fitch talked with Libros Schmibros founder David Kipen, moderator of the panel, about the force and history of the winds.

Noting a nice breeze that had just cooled off the audience, Kipen asked Fovell if there was any way it might have been a Santa Ana.

Probably not, said Fovell, the meteorologist, who pointed out that the timing was off and the direction was probably wrong. Santa Ana season begins in late September and lasts until April or May, but the early fall gusts are the most storied because they’re the most dangerous—when Southern California is at its most dry. And unlike most of L.A.’s winds, which come from the Pacific Ocean, a Santa Ana blows into L.A. from the north or the northeast. These winds begin as a dome of cold air moving through the Great Basin in Utah and Nevada. The Sierra Nevada mountains are taller than the air mass, so the winds get funneled through Southern California, blow through the Mojave Desert, and then are pushed down into Los Angeles through the canyons and passes—increasing pressure as they come down in altitude.

Drew Smith, the fire captain, said he has fought Santa Ana-driven fires since “The Siege of 1987,” which burned through both Southern and Northern California. Every year, he said, the firefighters of L.A. face significant blazes involving the Santa Anas. Wind-driven fires defy the rules that others follow and grow exponentially due to spotting—when winds carry embers and other burning material through the air. A routine Santa Ana lasts for three days, and during that time, the fire departments increase their operational readiness, with augmented staff and extra resources brought in.

Observers of Los Angeles have noted that the winds seem to change the mood and tempo of life here. “Just about every writer who has lived here and has been paying attention,” said novelist Fitch, “writes about the weather and writes about the Santa Anas.” At Kipen’s request, she offered up an epigraph to the evening in the form of passages from Joan Didion’s essay “Los Angeles Notebook,” the Raymond Chandler story “Red Wind,” and her own novel, White Oleander.

“‘There is something uneasy in the Los Angeles air this afternoon, some unnatural stillness, some tension,’” Fitch read from Didion. “‘The baby frets. The maid sulks. I rekindle a waning argument with the telephone company …’” (The telephone company line elicited enormous laughs from the audience.)

Fitch began and Kipen concluded the famous Chandler quotation: “‘On nights like that every booze party ends in a fight. Meek little wives feel the edge of the carving knife and study their husbands’ necks. Anything can happen. You can even get a full glass of beer at a cocktail lounge.’”

White Oleander begins with the winds; Fitch read its opening sentences: “‘The Santa Anas blew in hot from the desert, shriveling the last of the spring grass into whiskers of pale straw. …’”

Kipen asked the panelists to address the lore around the Santa Anas. Do they cause, or coincide with, seismic activity?

Climate change does not appear to affecting the winds either, said Fovell. Instead, he’s found that since the end of World War II the Santa Anas’ force has been cyclical—and since the year 2000, it’s been particularly strong.

“Do they make us jumpy?” Kipen asked Fitch.

The winds frighten us, said Fitch, because we know that fires follow them. “But also on a primitive level, we like our temperate climate, we like our green trees, we like our little garden of Eden here.” And the Santa Anas remind us that nature is also a part of the city—one that’s indifferent to us humans.

Kipen asked Fovell to talk about where the name comes from.

Fovell said he has often been scolded for calling them “Santa Ana” instead of “santana” winds, but the first mention of “santana” winds in the Los Angeles Times was in 1956, while the paper referred to the “Santa Ana” winds as early as the 1880s. He added that he’d seen several articles quoting the city founders of Santa Ana, California, who were upset to be associated with the winds.

Kipen said that Saint Anne is said to be the protector from storms, and Fovell added that he’d heard the winds could be named after Santa Anna, the Mexican general, despite the different spelling, or Saint Anne’s Feast Day, which takes place in the summer before Santa Ana season begins.

Smith asked the crowd for a show of hands: How many people in the audience had been affected by a wind-driven fire in their communities? Half the panelists and about half the audience raised their hands.

But for at least one person present, violent winds aren’t a source of fear. Kipen asked Fovell, who models forecasts for the winds: Would you rather have an incredibly strong wind that confirms your prediction or a mild wind that defies it?

“That’s a trick question,” said Fovell, who nonetheless answered. “Let me throw caution to the wind: The stronger, the better.” 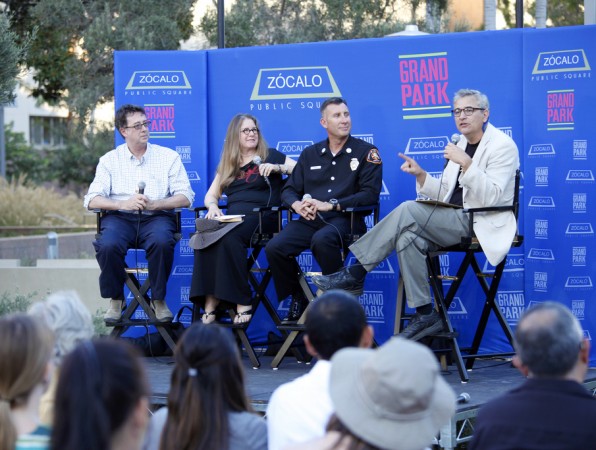 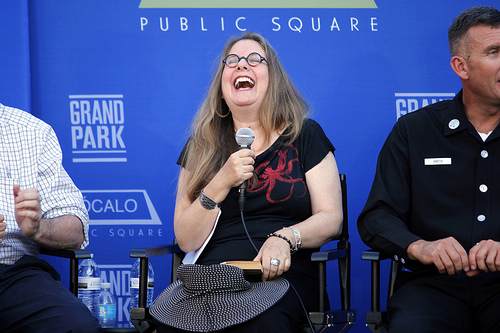 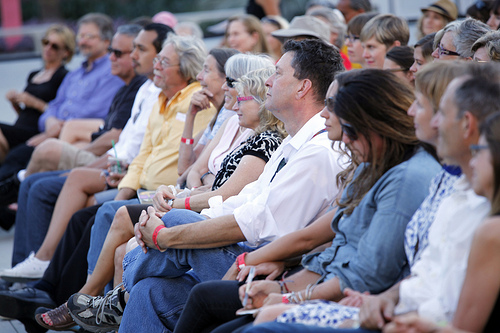 The crowd on a warm Friday night at Grand Park (any breezes, alas, were not Santa Ana) 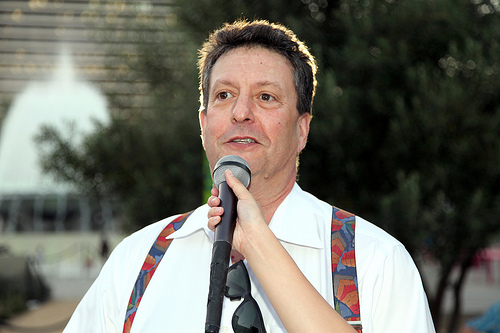 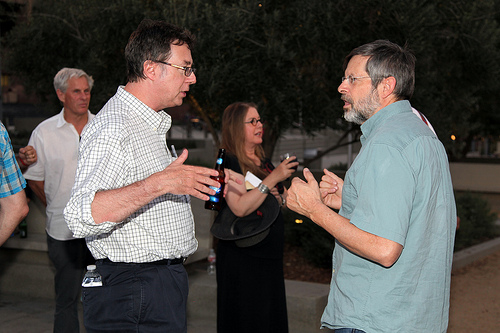 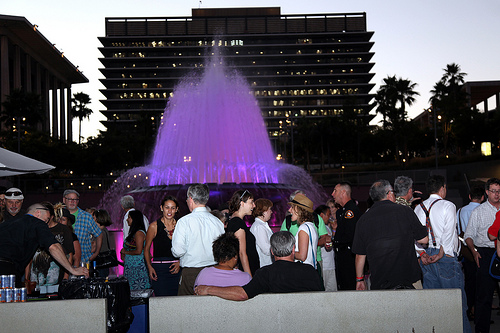