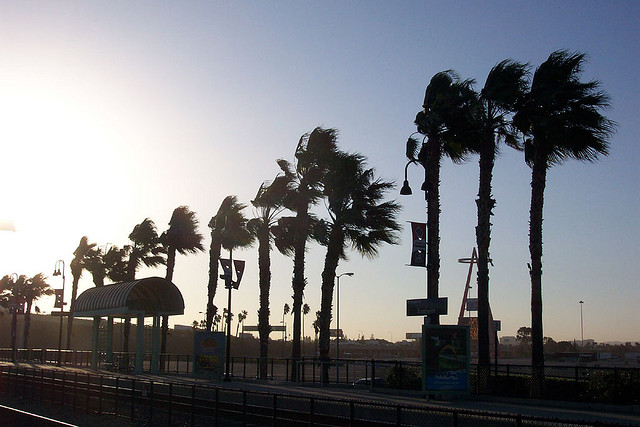 They remind us of what we can’t control

They remind us we’re in the wild

If you reside in Los Angeles, you’ve felt the heat of autumn and perhaps cursed the “devil winds,” the hot gusts that blow through the mountain passes in southern California and cause mischief throughout the land. Wildfires, downed trees, and brittle moods characterize the season, and poets and novelists keep drawing on them for grim inspiration. They are the Santa Ana winds, the wind that, in the words of Joan Didion, “shows us how close to the edge we are.” In advance of a Zócalo/Grand Park event “Why Do the Santa Anas Blow Our Minds?”, we approached several Angelenos of letters and asked them the following question: What does our collective fascination with the Santa Ana Winds say about L.A. culture?

They remind us of what we can’t control

In Los Angeles, we like to think that we’re the boss of nature. It’s a place where plastic surgery resets the clock. Where a once-wild rio lies tamed in concrete. Where air conditioning and the California Aqueduct set the stage for a dusty Mexican pueblo to morph into a world megalopolis.

Along the way, ancient gods gave way to modern ones and nature herself was relegated to a cinematic backdrop—there we are frolicking on the sugar sands; sipping tropical drinks amidst the bougainvillea, toiling in our skyscrapers as the snow-capped San Gabriels gleam in pellucid winter light.

But the original inhabitants whose land we stole could have told us that the old gods aren’t dead. They still abide, woven into the woof and warp of this place. And when L.A.’s spirits of earth and fire, water and air make their presence known, all of our smug 21st-century technological superiority quails before them.

Yes, I know it’s primitive of me to call them spirits. The devil winds of Santa Ana are a meteorological phenomenon of no mystery whatsoever that can be clearly explained by scientists who study air flow, velocity, and temperature.

But anyone who has experienced Santa Ana’s eerie warm caress knows that she’s found a trapdoor into our psyche that bypasses our rational brain and touches us on a more atavistic plane. The Santa Anas fire up every vestigial sixth sense we possess.

And we ignore them at our peril.

Maybe that’s why Angelenos turn to poets and dreamers to interpret these winds. Scientists are all well and good, but there’s a lacuna in their explanation that only the irrational and fantastical—something we like a lot, being children of Hollywood—can fill.

Santa Ana’s wind forces us to confront nature in all its dark, capricious glory. And to admit the visceral grip it still exerts over us, both physically and mentally. In our arid fame-and-tech-obsessed world, the Santa Anas remind us that L.A. is full of powerful, untamed forces.

And that’s not a bad thing.

Denise Hamilton is an L.A. based crime novelist and editor of the Edgar Award winning short story anthology Los Angeles Noir. Visit her at www.denisehamilton.com.

What strikes me about the fall winds, those disruptive Santa Anas, is that for all of their power, they are invisible.

We hear them as they pass through the region. We feel the heat wrapped around the powerful noise—but the wind is unseen. We live, of course, amid all manner of their after-effects. They have written themselves into our histories—most dramatically, the fires that remake the hills and canyons. But it’s the more discreet, unexpected nature of their presence that haunts and unnerves us.

Paging through a family album, I find traces sweeping through an old schoolyard class photo—lifting skirts, shirt-tails, hair—everywhichway. Coasting through my day, I register years of their handiwork—the boulevards lined with many-stories-tall Mexican Fan Palms pitched into a permanent northeasterly bend. They topple the jerry-built work shed. They send the outdoors indoors—dirt and branches piling beneath a mis-hung kitchen-door. Annually, without fail, I cut myself on a jagged harvest of fallen fronds. Yet my best measure of the wind’s absent presence is a feeling on my skin: taut, dry. Painful to the touch.

With all of our hundreds of placid, predictable days, the winds—like the earthquakes to which they’re apocryphally linked—are powerful precisely because of this invisibility, this unpredictability. The Santa Anas are one of the few things that equalize us—link us—across the region. Like those seismic tremors that don’t announce their arrival or intent, the winds push us everywhichway and also against something unseen and unexpected—our own vulnerability—the twists in life we can’t curate.

Lynell George is an L.A. based journalist. A former staff writer for both the Los Angeles Times and L.A. Weekly, she is currently an arts and culture columnist for KCET’s Artbound.

When nothing happens, everything happens. Minimalists know this. Artists like Barnett Newman and Ellsworth Kelly made big, sweeping, often boringly monotone works that suggested a lack of activity; no activity is their activity. Minimalist techno artists like Ricardo Villalobos and Los Angeles’ own John Tejada have made intellectual and (somehow) dance-driven careers out of obsessing over sounds that are usually considered to be annoyingly unchanging. They teach us that a lack of movement is movement.

Few of us are aware that Los Angeles is a city based in minimalism. There is no weather, for instance. It is only warm, warm, and warm. Los Angeles’ seasons are kind of sunny, fairly sunny, really sunny, and super sunny. At best, there are a handful of days when it rains, and the month of June is well known for being climatically “different.” (It has inspired the term “June Gloom.”)

The Santa Ana Winds are another marker of change on the blank L.A. canvas. Their late-night gusts and tree swaying get people talking and bring an excitement akin to a blizzard, a dramatic weather event Los Angeles never sees. When palm trees crash against each other as you sleep, their kinetic energy gets into your head, upending the mundane and the minimalist.

The Santa Ana Winds are fascinating to us because they are a change. In a city that often seems still and monochromatic, the Santa Ana winds are a giant late-in-the-year splash of color to remind Angelenos that the weather can change.

Kyle Fitzpatrick is a writer and social media person based in Los Angeles. He runs the website Los Angeles, I’m Yours and loves dogs.

They remind us we’re in the wild

When those winds come up—hot, dry and hungry—every Angeleno takes notice. The Santa Anas are a fluid reminder that, no matter how many tons of asphalt we slather over the sand, this is wild, tough country with a mind of her own.

Those winds are unpleasant, though they do fine things for the view. Be careful admiring it, lest a palm frond blow your way. It’s no joke when one of those makes land.

The Santa Anas drive home what a clever design a Spanish courtyard-style house is. Thick adobe walls to keep in the cool of the night until darkness falls again. Long, protected shadows, perfect for siestas when it’s too hot to work or to think. Wind-breaks on all sides. Man first shaped houses like these for the African wind called sirocco, but one desert wind’s much the same as another.

Raymond Chandler goes in and out of fashion; he’s out right now. But no writer better captured the profound influence of that wild wind on the psyches of Angelenos. You can keep your earthquake weather; give me winds that make meek little housewives into monsters.

Kim Cooper is the creator of 1947project, the crime-a-day time travel blog that spawned Esotouric's popular crime bus tours, including The Real Black Dahlia. With husband Richard Schave, she curates the the literary and cultural salons of LAVA—The Los Angeles Visionaries Association. Her books include Fall in Love For Life, Bubblegum Music is the Naked Truth and an oral history of Neutral Milk Hotel.

Ask a native and you’ll learn the Santa Anas are a hot dry wind moving swiftly through the mountain passes from the great Mojave, and they bring the baffling heat of autumn just as the beaches and parks clear of children and the tourists plod home, muttering about the gloomy weather in Santa Monica. All true. But so inadequate to express the soft, sure touch against your skin, swift but not hurried, deliberate somehow, and the smell; it’s a clean smell and alive, warm like the skin of an animal, warm like its breath or blood. The Santa Anas remind us that the mountains are sentient, and the desert, and the sea, and they communicate in a language unknown to us, although the Chumash or the Tongva may have understood a bit in some inadequate human way. The winds will bring fire if they will, death if they will, and destruction, the misery of allergies, and men on rooftops armed with garden hoses and bravado and prayer. But the Santa Anas are not devils, nor are they saints.  They’re a fathomless thing, a thing made of air and heat and mystery, alive and not alive, the sweet breath of wild places that are not yet tamed and, God willing, never will be.

Anna Scotti is a poet, writer, and teacher living in Southern California. Her poetry appears regularly in Comstock Review, Chautauqua, Crab Creek Review, and Yemassee, and can be accessed through her website, annakscotti.com. In her first incarnation as a journalist, Scotti was a columnist for InStyle and for the late, great, Buzz: the Talk of Los Angeles.