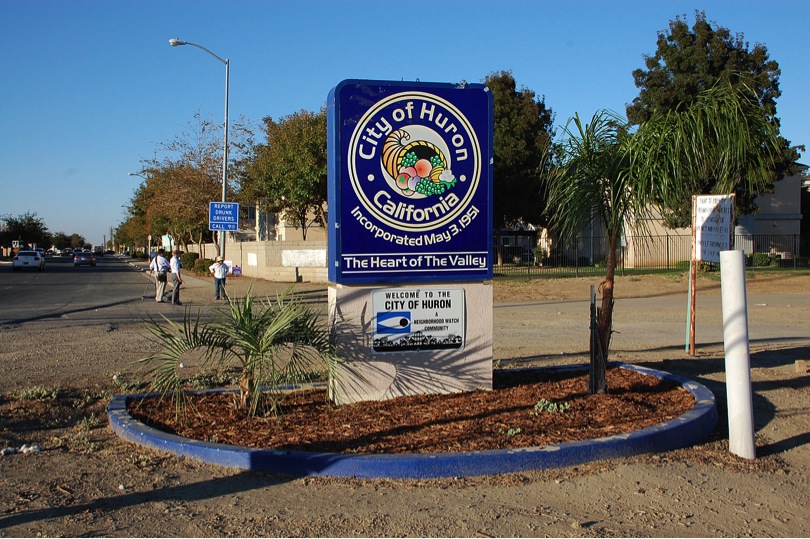 Rey Leon works on sustainability in the city of Huron, California. Sustainability is a common enough word on the California coast, where hybrid cars, organic food, and solar power are status symbols as green as the money that buys them. But what does sustainability mean in Huron, population 6,733?

Situated 50 miles west of Fresno in the San Joaquin Valley’s tomato fields, Huron has the dubious distinction of having one of the lowest median household incomes in California—$22,969 compared to California’s median of $61,632. And even though it’s in the middle of farmland, Huron is anything but rural: The census department defines an urban area as having 1,000 residents per square mile. Huron has 4,200 per square mile, which makes it essentially a miniature city—smaller than most L.A. neighborhoods—squeezed in between the valuable farmland and roads that supply the tomato paste factories in Huron and surrounding towns.

I met Leon at the town hall, which has some of the biggest trees and the nicest lawn in this dusty place. Dirt blows into Huron from the fields and a creek, and is kicked up again by the fully loaded semis barreling through on State Route 269. How can a place this brown be green? Leon thinks Huron doesn’t need solar panels or big spending or revolutionary ideas so much as it needs to harness the strengths the community already has: “Ideas about sustainability usually come from the outside, but I had an idea about them coming from within.”

Leon grew up in Huron, got into the Boy Scouts, went to University of California Berkeley, and has been an environmental justice activist since 1994. In 2008, he founded and became director of Valley LEAP (Latino Environmental Advancement Policy Project), a non-profit that works with communities to create healthier environments, sustainable communities, and green jobs. He speaks in sentences that mix green buzzwords with slang about the realities of life in Huron. As we drive past a man walking beside the road with a bandanna over his nose and mouth to protect himself from the dust, Leon notes that living here is a bit like living in a factory by mocking the language of industrial safety: “Dust mitigation, PM10, voluntary,” (Meaning, the man’s bandanna is a voluntary dust reduction strategy for larger particles.)

Leon’s real point is that there are keys to a different sort of sustainability hiding in plain sight here. “This place is not hip to the green movement, slow food movement,” he says. But many residents of the town, which is more than 96 percent Latino according to the 2010 census, are practitioners of molcajete, the stone mortar used in Mexican cooking that you’ve likely seen if you’ve ever ordered guacamole prepared tableside. Leon throws up his hands: “It’s green manufacturing, slow food, live food, and there’s a cultural practice that uses human power instead of an electric blender.” If you count molcajetes instead of Priuses, Huron’s homes are greener than Berkeley’s. “In all of these fancy mainstream initiatives. They”—meaning the people of Huron—“are actually leaders.”

Leon stops at his dad’s house to help him find a place to vote in today’s primary election. As Leon spends 10 minutes calling around to find the location, he greets, sometimes with a whistle, various young men who pass by. Greetings, he explains later, are “cultural glue” that tie the different generations together. This glue, he says, is harder to find in the neighborhood where he lives in Fresno. There, friends’ attempts to create a neighborhood watch were hampered because neighbors didn’t know each other, and they didn’t want to go to meetings. Eventually, the neighborhood resorted to staying in touch on Facebook. “The community has to relearn how to be a community,” he says. “They have to learn how to communicate with each other.”

Hidden to outsiders, Huron’s households are networked together. The first families immigrated there from Michoacan 70 years ago, and others have joined them over the decades. The result is a multi-layered network where everyone is known. Leon calls it “living in 3-D,” which means that a person is known in many dimensions—as a friend, a relative, a worker: “Somewhere, somehow people are connected, even if not directly.” In Huron, Leon says, these networks have been damaged by poverty and gang violence, drugs and illness, but they also provide support against those same threats. Living in 3-D, when the culture is maintained, Leon says, “helps release stressors and get over the negative stuff. You’re able to vent with support.”

One problem Leon sees in Huron is that at night it’s “dead.” The city lacks a culture of walking. Leon would like Huron to be more like the nearby town of Avenal, where families regularly walk around at night. Avenal, Leon says, used to be dead, but its culture was reinvigorated by more recent immigrants from Michoacan, who brought their culture of strolling after dinner north. “They’re strolling around, literally with strollers, and boys are meeting girls, people are becoming non-strangers. It’s a live community,” he explains. In Huron, by contrast, no one is out walking. Part of the reason, Leon says, is Route 269, and its trucks, which have hit people in the past. Fear keeps people in Huron from walking beside or across the road.

In 2011, Caltrans gave an environmental justice grant to the City of Huron and Valley LEAP to “identify low-cost, easy-to-implement solutions and long-term strategies to improve safety, access, and mobility for all users.” What that really meant was that they needed to find a way to coexist with Route 269 and its trucks. In 2010, state records show that trucks killed 12 residents of Fresno County and injured 238 others.

After community discussions, Huron asked Caltrans to put in traffic circles at both ends of town to slow the trucks down and improve crosswalks. But what excites Leon the most is the idea of building what he calls a “pocket plazita.” This tiny plaza will occupy a strip of land created by fixing a dangerous intersection between two city streets and 269.

“I want it to be a place where the elders can go and relax,” he explains. “Youth can go there, and maybe they learn to play the guitar. Eventually there could be a mariachi group there. Families can get together. There should be a space for a few food vendors so the old people will feel at home. It would be great if some small farmers could come in and sell their vegetables.” So far, Caltrans has said the plan is feasible, and the City of Huron has approved it. Now Valley LEAP is working with its partners to identify funding sources for a report by the end of the year. If the plazita is built, Huron will have a place to meet and greet, get a snack, and perhaps heal its networks in the midst of poverty, dust, and industrial tomatoes. And that would be green.