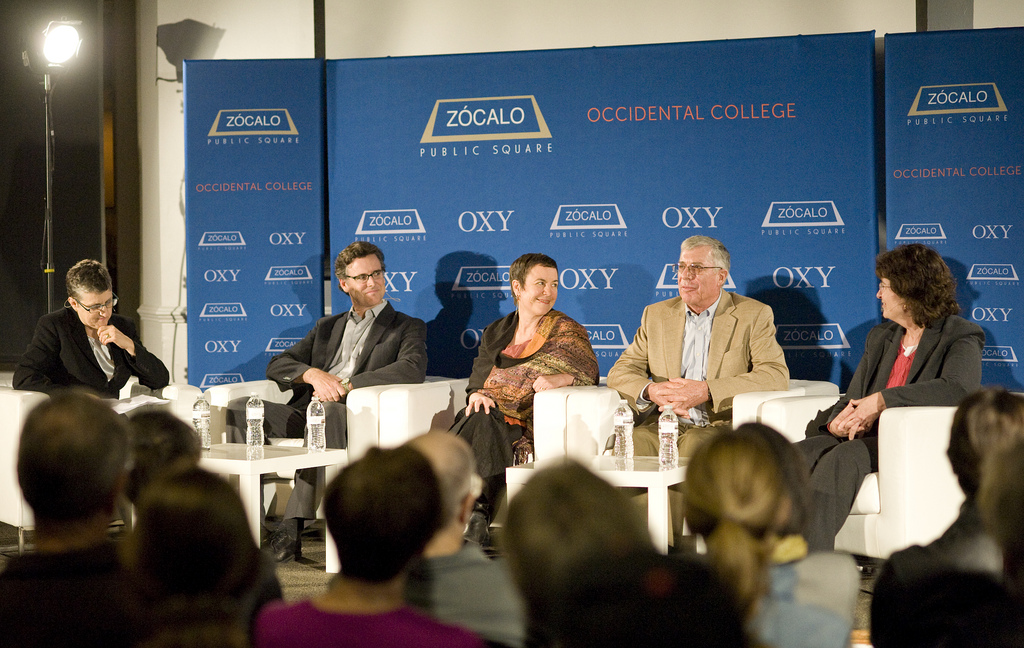 The California Delta is connected to everything in the state, Lois Kazakoff, the deputy editorial page editor of the San Francisco Chronicle, told a crowd at the Fort Mason Center in San Francisco. It also forms a large part of the state’s water supply. But in a recent survey of Californians, 78 percent of respondents said they didn’t know what the Delta was and had never heard of it.

Kazakoff was moderating a panel co-presented by Occidental College—featuring a Delta farmer, a water policy expert, a conservationist, and a water resources manager and engineer—to discuss how the Delta can be saved and whether the latest plan for its future, the Bay Delta Conservation Plan, is going to work. The Delta is a big, expensive problem for California to fix. It’s also a big, expensive problem for California not to fix. What, asked Kazakoff, do Californians need to know about the Delta in order to understand an enormous problem facing the state today?

Joan Maher, deputy operating officer for the Santa Clara Valley Water District—which supplies water for 1.8 million people—said that Californians need to understand where their water comes from and how much of it, all across the Bay Area, flows through the Delta.

Russell van Loben Sels, who has farmed in the Delta for 40 years, said that the Delta is a place where agriculture, the environment, and water come together; it’s a place and a people and a vibrant ecosystem that the rest of California should strive to understand.

For Ellen Hanak, who researches water and natural resources as a senior fellow at the Public Policy Institute of California, what’s crucial to know is how people have changed and are changing the Delta. It’s provided humans with agriculture and water, but, right now, sea level rise is putting pressure on its levees, and wildlife populations—fish in particular—are struggling.

As executive officer of the Sacramento-San Joaquin Delta Conservancy, Campbell Ingram works on restoring both the ecosystem and the economy of the Delta. He thinks Californians should understand that “it needs a lot of help in many ways”—and that the best thing people can do is look at how they can reduce stressors on the state’s water system.

The panelists all agreed that the Delta faces a number of problems, but the panelists differed greatly on priorities—as do the many people and interests who depend on the Delta. For farmer van Loben Sels, the issue that matters is keeping the freshwater of the Delta in the Delta. But Maher, of the Santa Clara Valley Water District, said that the question of the right amount of water in the Delta is more complex. Right now, with 95 percent of fish species habitat gone, “it’s not a hospitable place for fish,” she said. Fish fatten up in a typical estuary, but in the Delta, they lose weight. Is more water a surrogate for a better habitat? Is it simply diluting pollutants? At the same time, her district is full of people who want to turn on their taps and have water flow freely; another big issue, for her and them, is the stability of vulnerable man-made levees. However, there’s little agreement in the Delta about just how vulnerable these levees are.

Ingram, of the Sacramento-San Joaquin Delta Conservancy, said that the biggest problem facing the Delta isn’t water supply vulnerability or ecosystem collapse but the inability of people and groups to communicate around the challenges they’re facing together. Everybody recognizes the stressors facing the Delta—but they only want to address the challenges caused by others.

Kazakoff explained that right now is a crucial moment in the future of the Delta because a draft of the Bay Delta Conservation Plan will be published in December, and people in the state will have an opportunity to comment on it before a decision is made next fall. A key part of the plan involves twin tunnels that are going to move water from the eastern side of the Delta to the south side, and then into the state water system. Is this going to make the state’s water supply more reliable?

Hanak, of the Public Policy Institute of California, explained that new restrictions have meant that between 20 and 25 percent less water is pumped through the Delta today than it was six or seven years ago; San Joaquin Valley agriculture has borne the brunt of the water loss. For growers there, reliability means getting water pumped in at 2007 levels—a proposition that would be hugely expensive. Unanimity, added Hanak, is impossible when it comes of the future of the Delta. But “is it possible to get to a place where most people can live with it?”

The process of implementing the Bay Delta Conservation Plan has made that difficult, said van Loben Sels, the farmer. It began in 2006 behind closed doors; people in the Delta weren’t able to get involved until it was pretty well shaped. At this point, he believes that the project is big enough that it could physically harm the Delta—but he’s not sure, because how the project will operate won’t be made clear until after it’s built. Rather than being a political process, the plan has become an administrative one that’s very difficult to weigh in on, he said.

Ingram used van Loben Sels’ concerns as an opportunity to plug a set of meetings, the “Delta Dialogues,” which his organization, the Delta Conservancy, is hosting. It’s an attempt to bring all the Delta interests together in conversation to get a shared understanding of one another’s interests—and to build much-needed trust. 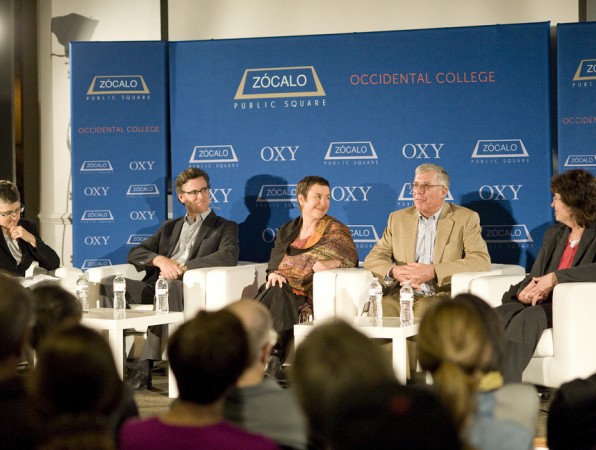 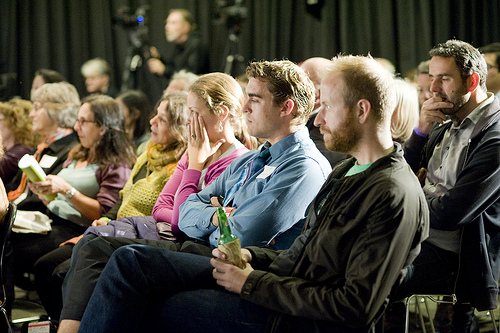 The audience at Fort Mason Center in San Francisco 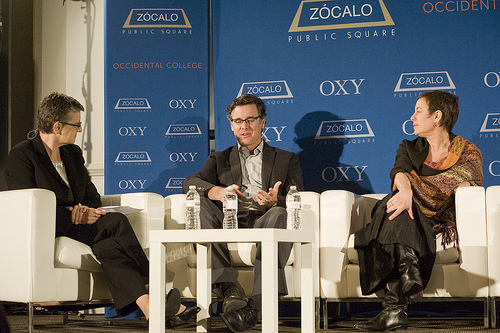 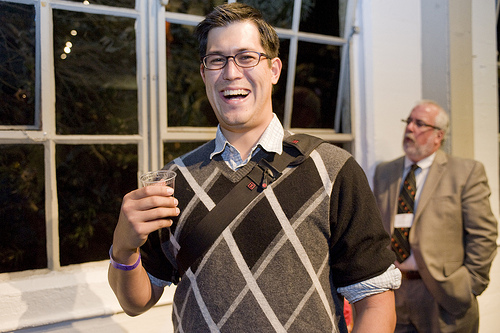 Guests chatted over drinks at Fort Mason after the program 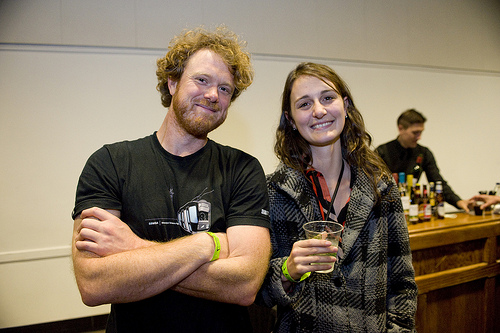 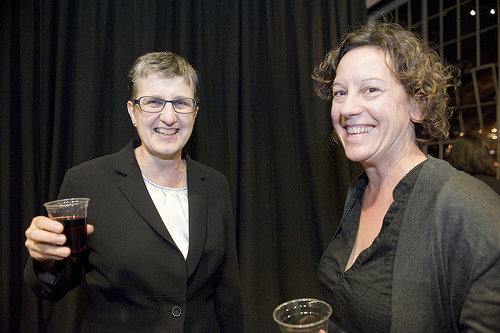