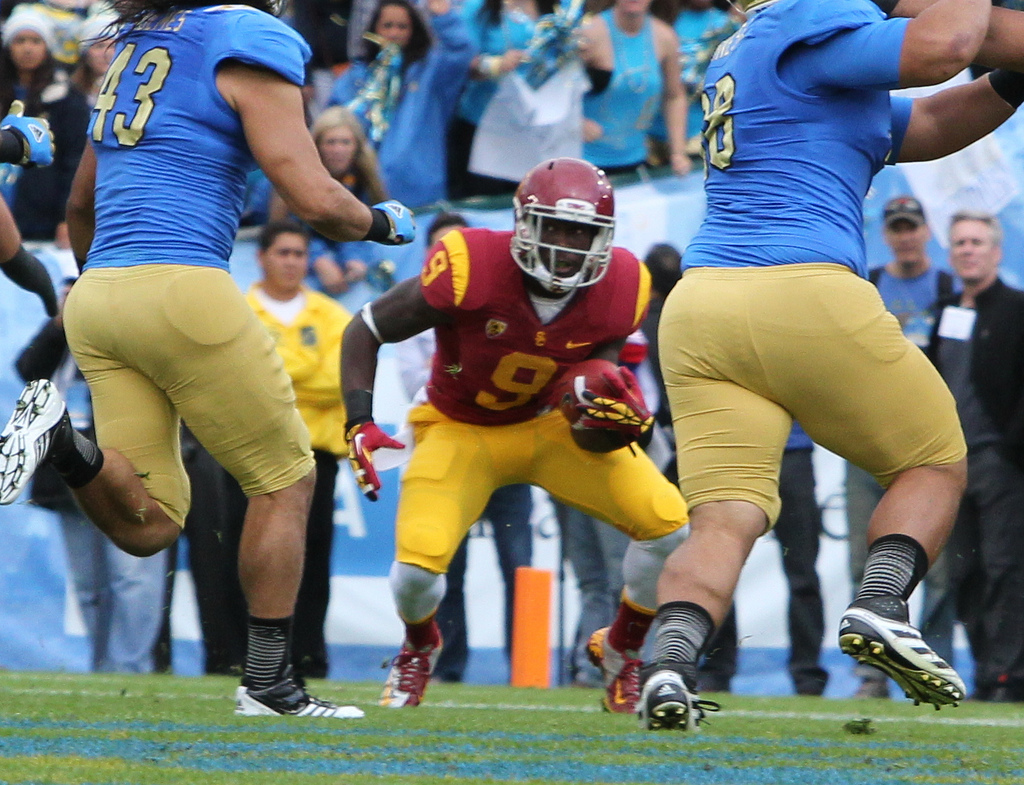 I confess: I’m a diehard USC football fan. I braved 29-degree temperatures in Boulder last Saturday night to witness my Trojans conquer Colorado. This week we—I’m class of 1995 and the son of two alums—play crosstown rival UCLA. We are without a doubt UCLA’s biggest rival. But in my opinion, UCLA is not SC’s biggest rival—only its closest.

That’s not to say that SC fans don’t care about the UCLA game; of course we do. They’re our “noisy neighbors” (to borrow the moniker that Sir Alex Ferguson, legendary former coach of the English Premier League soccer franchise Manchester United, bestowed on their local rival, Manchester City). Lose to UCLA, and SC fans can expect to hear about it from the tens of thousands of Angelenos who regularly attend UCLA games. My wife, an SC alum who’s not much of a football fan, only cares if SC beats UCLA so she doesn’t have to hear about it from acquaintances.

But that’s the limitation of the SC-UCLA rivalry, and of any local fight in this global city: It’s only the neighbors who care.

And, for the past generation, it’s been hard for anyone but the most passionate football fans to care, since the games have rarely been close. UCLA owned the rivalry in the 1990s and was undefeated from 1991 to 1998. SC has dominated since 1999, going 12-2 until last year (two of those wins have been vacated by penalty of the NCAA). In seven of the last 12 games, SC has won by more than 20 points. Last year, UCLA won by 10. In the entertainment capital of the world, a rivalry has to produce close, entertaining games to be truly great.

The rivalry also isn’t as physically close as it once was. Until 1982, when UCLA relocated to the Rose Bowl, the Los Angeles Memorial Coliseum served as both teams’ home stadium, despite being essentially across the street from the USC campus. The shared home turf spawned the tradition of both schools wearing their home uniforms in the game. Although an NCAA rule change halted that tradition, it restarted a few years ago when the schools agreed to ignore the rule.

But UCLA hasn’t won at the Coliseum (the site of this year’s game) since 1997. The last time the teams met at the Coliseum, SC blew out the Bruins. Instead of wearing their home colors, UCLA wore “special” all-white uniforms. Apparently they took the surrender color seriously, capitulating 50-0.

That game reminded me why it’s hard to take UCLA seriously as a rival. The Bruins have a great basketball tradition, but little of that enthusiasm spills over to football. UCLA has a band but not much of a student section. The Bruins couldn’t even fill the Rose Bowl for last week’s pivotal game against Arizona State University. That’s understandable—their stadium is 27 miles from their campus—but the smaller crowds mean less energy for UCLA football, and for our rivalry. SC, on the other hand, is overflowing with the tradition and trappings of college football: “Fight On,” the horse known as Traveler who runs on the USC sidelines, our band playing “Conquest,” two-fingered victory salutes, the drum major planting the sword in the field, the fourth quarter lighting of the Olympic torch at the Coliseum. And then there’s the tradition on the field: SC has played in 31 Rose Bowl games—the reward for the Pac 12 conference champions—on New Year’s Day. UCLA hasn’t played in the Rose Bowl on New Year’s Day since January 1, 1999.

So who is SC’s biggest rival? I say Notre Dame. The Trojans have played the Fighting Irish more times than they’ve played the Bruins. The SC-Notre Dame rivalry is national, not local. It is college football’s greatest (and really only) inter-sectional rivalry. And Notre Dame has the sort of college football tradition that makes it a serious rival for USC. While UCLA won a national championship in the ’50s and even managed a Heisman Trophy in the ’60s, that record pales in comparison to Notre Dame. Notre Dame won 13 national championships (SC claims 11) and seven Heisman trophies (SC has six).

My view of relative weakness of the UCLA rivalry isn’t universal. I’m sure there are some SC fans who care more about beating our noisy neighbors, if only to silence them. And I don’t want to create an impression that I don’t care if SC wins or loses against UCLA on Saturday. I care deeply. But in that bleak and boring eight-month stretch known as the college football off-season, the pain of having lost to Notre Dame this year will far outweigh any satisfaction gained by our recent string of victories this season. Even a win over UCLA won’t dull the ache of that defeat in South Bend in October. It’s the kind of pain that only your biggest rival can inflict.