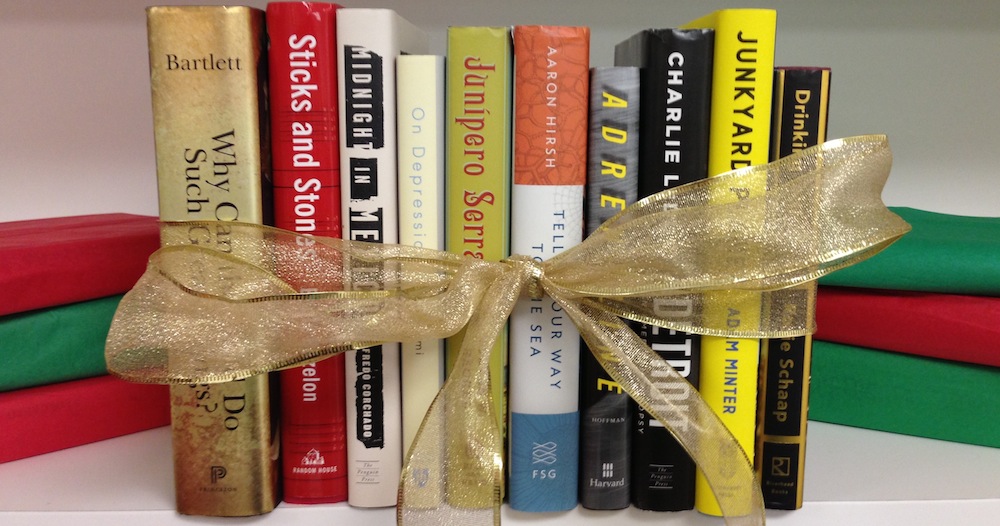 The air’s turned chilly, Hollywood awards season has begun, retailers are knee-deep in their quest to get in the black, and so everyone—and their mother—has a best of the year list for you. In true Zócalo fashion, our favorite books from the past 12 months are meant to keep you guessing. Their subjects zig and zag—from saints to scrap to Serra (Junipero, that is). But all of our top 10 nonfiction books of 2013 put forth ideas and stories that surprise, delight, and make us see the world just a little bit differently.

Robert Bartlett’s Why Can the Dead Do Such Great Things? Saints and Worshippers from the Martyrs to the Reformation brings enigmatic peoples and enigmatic practices—the making of pilgrimages, the creation of relics, the building of shrines—to vivid life. In exploring why Christians love the saints, this book also explains how a world religion evolved as it did.

Emily Bazelon’s Sticks and Stones: Defeating the Culture of Bullying and Rediscovering the Power of Character and Empathy is for everyone, whether you were a geek or a jock, whether you’re a parent or a teacher, and whether you’ve got your own kids or you’re not yet fully grown up. We’re more aware than ever of bullying yet no more adept at stopping it. Here’s a compelling argument for how we can all do better.

Alfredo Corchado’s Midnight in Mexico: A Reporter’s Journey Through a Country’s Descent Into Darkness is a vivid account of how Mexico has changed over the past 20 years. But it’s more kaleidoscopic than chronological, overlaying hope and violence, political change and corruption, penetrating reporting and a deeply personal story.

S. Nassir Ghaemi’s On Depression: Drugs, Diagnosis, and Despair in the Modern World offers a delightfully contrarian view on melancholia: that we underestimate the good that can come from sadness and even depression, and as a result we don’t always treat it correctly. It’s a wise, thoughtful take on mental illness and our bright-eyed culture of optimism.

Steven W. Hackel’s Junípero Serra: California’s Founding Father dispels the myths (both laudatory and demonizing) surrounding the man who founded missions up and down California in the 18th century. But it is far more than a corrective. It’s a tale of Spain, Mexico, and America; of faith, politics, and pioneering; and of a man who was neither wholly sinner nor saint.

Aaron Hirsh’s Telling Our Way to the Sea: A Voyage of Discovery in the Sea of Cortez reads like poetry, even as it tackles complex science. The setting is a remote fishing village in Baja California, the characters are a handful of students and three professors, and the timeframe is a summer-long biology course, but this story of ecological change and transformative learning contains multitudes.

Brian B. Hoffman’s Adrenaline is that rare medical history that gets your heart beating a little bit faster. Here are the stories of scientific discovery and cultural mythmaking behind a hormone we love to talk about—but which most of us don’t understand.

Charlie LeDuff’s Detroit: An American Autopsy is a manic trip to America’s most down-and-out city with a prodigal son who returned home in 2008—only to get held up, threatened, nearly arrested, but never quite broken by the decay around him. The dialogue crackles and the garbage stinks, but there’s love here, too.

Adam Minter’s Junkyard Planet: Travels in the Billion-Dollar Trash Trade romps through scrapyards from China to Texas, making the repurposing of car parts, Christmas lights, and aluminum cans surprisingly thrilling. Recycling is a bigger, dirtier, and more glorious business than we ever imagined.

Rosie Schaap’s Drinking With Men: A Memoir is a coming-of-age chronicle with a twist for every convention of its genre. It’s the story of a woman who finds redemption without reforming her hard-drinking ways, and whose most memorable romances are with bars rather than the men who frequent them.