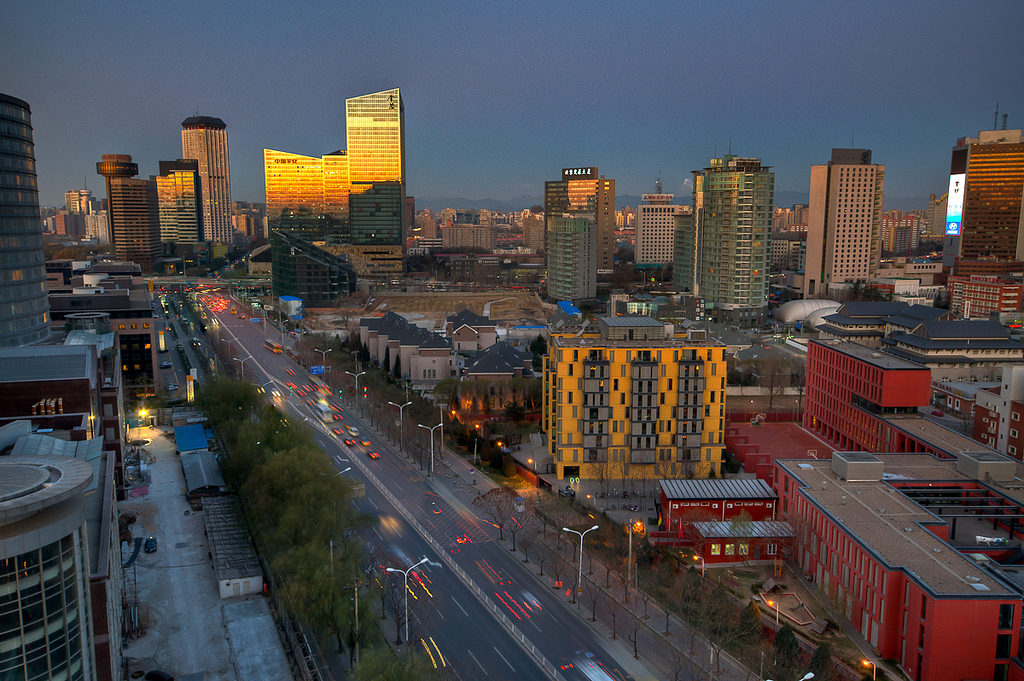 As Beijing bureau chief for the Financial Times, Geoff Dyer watched China begin to wield its power not just for domestic economic growth but to expand its geopolitical reach around the globe. Dyer visits Zócalo to ask whether China is destined to unseat the U.S. in a new world order. Below is an excerpt from his book, The Contest of the Century: The New Era of Competition with China–and How America Can Win.

Beijing was in a state of heightened anxiety and had been for weeks. Each day in the run-up to the National Day parade, the security measures seemed to get a little bit tighter. Our apartment building had a distant view of Jianguomen, which is the main east-west avenue that runs through the center of Beijing, traversing Tiananmen Square along the way, and which was to be the main parade route. During rehearsal the Sunday before, we were told not to go onto our balconies.

“What happens if we do? Will we be shot?” a neighbor jokingly asked. The building manager replied in a deadpan manner, “Maybe; who knows?” All the pigeons in the city were locked up and kite flying was banned, presumably to prevent undesirable threats to the safety of airspace. On the day itself, the two blocks on either side of the route were closed off to passersby. The 2009 event was to be the 60th anniversary of the foundation of the People’s Republic of China, the first parade in a decade, and only the fifth time since the 1950s that such an event had been held. But, unlike in previous October 1 parades, no ordinary people were allowed to line the route and watch the festivities. The center of Beijing was hermetically sealed off from the city’s residents. For everyone but the invited crowd of VIPs and journalists, this was a television-only spectacle. Despite the country’s booming wealth, China’s rulers can often seem insecure, looking anxiously over their shoulders at the people they govern. In the weeks leading up to the parade, they had conducted a crackdown on human-rights lawyers, and three months later they ordered an 11-year jail sentence for Liu Xiaobo, the democracy activist who would later win the Nobel Peace Prize. The heavy-handed security was fruit of this nervy mindset.

A few hours before the parade was to start, I watched a stream of maybe 50, maybe 100 buses pass by, all with a regulation 30 meters in between them. The first group stood out because of the bright clothes of the excited young people inside—this bus orange, that one green, another blue. The next group were filled with soldiers in dress uniform, some trying to catch a last-minute nap, their heads pressed against the glass. With precision timing, they were being ferried to their starting places for a three-hour-long spectacle which was at times intimidating, at times impressive, and at times folksy, but never anything but meticulous. Like the morning mist, which lifted to make way for bright sunshine, the pre-parade paranoia quickly evaporated. By midday, 200,000 soldiers and civilians had taken part in the procession, and I did not see a single foot put wrong. It was a display that mixed North Korean mass choreography with the sort of swagger the Soviets used to muster for May Day. The kids in colored T-shirts that I had seen on the buses filled the vast expanse of Tiananmen Square to hold up cards that formed gigantic phrases: “Obey the Party’s Command,” “Be Loyal to the Party,” and “Long Live the Motherland.” For an hour, the military showed off the very latest of its hardware, the product of two decades of double-digit spending increases. There were the J-10 fighter jets, China’s first homegrown jets, and a long line of DF-31A intercontinental ballistic missiles, which have the range to hit Los Angeles, and which the Xinhua News Agency later described as “remarkable symbols of China’s defense muscle.” A decade before, much of the weaponry on display had been bought from Russia; this time it was all developed at home.

Military parades have been a feature of Chinese statecraft for centuries. During the Qing dynasty (1644 to 1912), victory ceremonies were often organized for the emperor to demonstrate his authority, and under the Communists they have been revamped for television. Geremie Barmé, an Australian expert on Chinese culture, recalls that in 1984, which also happened to be the year of Deng Xiaoping’s 80th birthday, a group of students from Peking University held up an impromptu sign during the parade that said “Hello Xiaoping.” As this was not in the script, the television cameras missed it. Once the event had finished, the spontaneous greeting was restaged and edited into the official broadcast. In 2009, the television highlight was the contingent from the Beijing Women’s Militia, who marched in precise fashion past the podium in red miniskirts and knee-high white boots, and who, Chinese media later revealed, were all models specially chosen for their uniform height. The main audience for the parades was the domestic one, which was to be both entertained and cowed by the organizational capacity of the Chinese state. But China is too big and too important for such an event to go unnoticed overseas. China’s leaders knew that images of its bristling military display would be beamed around the planet and seemed untroubled if the outside world was also a little intimidated. “It represents the realization of the great revival of the Chinese nation as a result of tireless struggle,” as the army described the event.

Before the military parade reached Tiananmen Square, the soldiers stopped in a long column along the main avenue to be reviewed by then President Hu Jintao. He was standing in the back of a Red Flag, China’s homegrown limousine, his head and upper body visible through the sunroof as it drove past the troops. Hu, a gray bureaucrat skilled at the inner workings of the party, went out of his way to cut a dour public profile, an almost deliberate anti-cult of personality. Dressed in a Mao tunic buttoned to the top, and with his dyed black hair immaculately coiffed, he seemed at first to have a slightly comic air, and I chuckled when a colleague quipped about his resembling an Austin Powers villain. Yet, as he boomed into the microphone in front of him “Tongzhimen hao” (“Greetings, comrades”) and “Tongzhimen xinku le” (“Thanks for all the suffering, comrades”), his voice, echoing all around the vast square, was a little chilling. Stern-faced, he returned to the podium at the gate of the Forbidden City, right above the giant oil portrait of Mao Zedong, and stood on the same spot where 60 years earlier Mao had declared that the “Chinese people have stood up.” Flanked on both sides by the other eight members of the Communist Party’s Standing Committee, the body that really runs the country, all dressed in dark business suits with red ties, Hu addressed the crowd. “Today a socialist China, geared toward modernization, the world, and the future, stands rock-firm in the East,” he declared. It was his biggest applause line.

Just over two decades before, the same square had been the scene of bloodshed. In the streets surrounding Tiananmen, Chinese soldiers massacred hundreds—maybe thousands—of Beijing residents as they tried to clear the student-led protests. Realizing their legitimacy had been called into question, Chinese leaders would sit somewhat meekly for years afterward as foreigners lectured them on the need to change their political system. Bill Clinton once told his counterpart, Jiang Zemin, that the Chinese Communist Party was “on the wrong side of history.” The scars from those events contributed to a desire among China’s leaders to maintain a low profile overseas and to focus on development at home. Shortly after the massacre, Deng Xiaoping devised his famous slogan to define Chinese foreign policy, advising his colleagues to taoguang yanhui—literally, “hide the brightness and nourish obscurity.” Deng knew that the resurgence of China’s economy would stir anxieties in the U.S. and across Asia, where many festering rivalries remain—even more so after the 1989 display of authoritarian muscle in Tiananmen. Deng realized that only by emphasizing humility and a willingness to cooperate could China develop its economy without provoking a regional and international backlash. For two decades, China looked inward and focused on rebuilding.

Yet, sitting under the baking sun in Tiananmen Square that morning, I felt Hu Jintao was delivering a very different message—the words of a risen China, not a rising China. He was telling the country and the world not only that the Communist Party was still very much in charge, but that it was also pursuing a path that was moral and right. China, he suggested, was now an important nation with legitimate interests, and it would not be afraid to defend them. Nations do not change tack overnight, of course, but the parade brought to the surface powerful forces that had been building for some time. It represented a symbolic turning point in modern Chinese history, when it became hard to ignore the way the Deng Xiaoping formula of self-restraint was crumbling and the new era of geopolitical competition with the United States that was emerging. The socialist rock in the East wanted to escape from the shadow of the West.