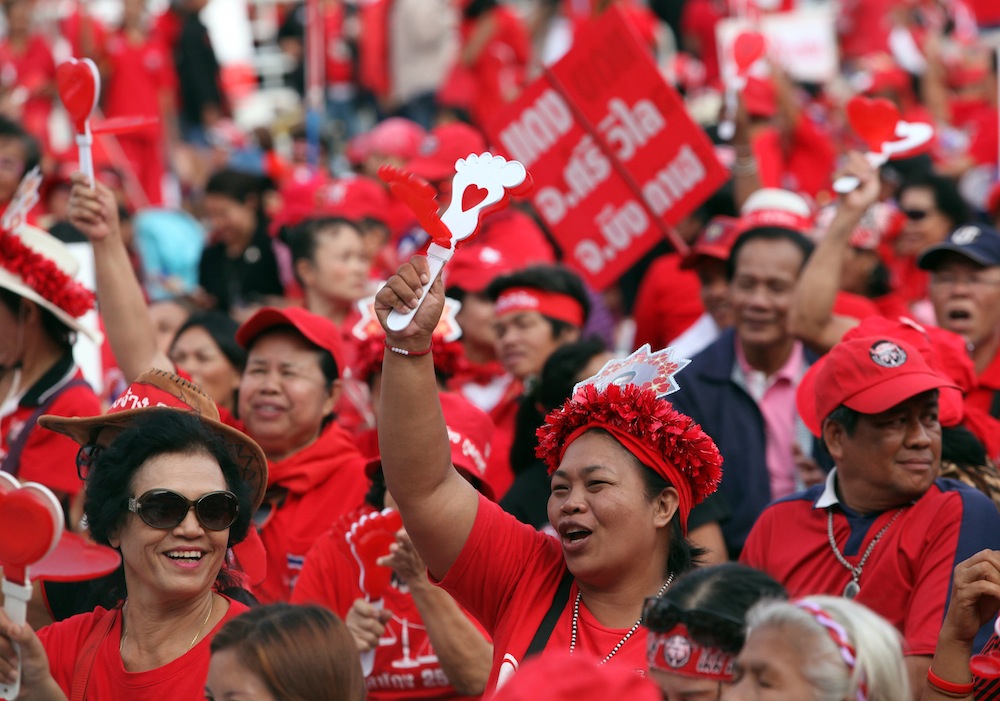 As you may have seen in the news, political strife in Thailand has reached a boiling point again. In the capital, Bangkok, hundreds of thousands of people recently took to the streets in a huge protest against actions by the governing political party. Some protesters stormed government buildings and media stations. The pro-­government group also gathered, and fighting took place. Police attempted to contain the situation with rubber bullets and tear gas. There were countless angry speeches, some shots fired, many injuries, and several deaths. Protest leader Suthep Thaugsuban demanded that Prime Minister Yingluck Shinawatra vacate her position; the prime minister has refused, and it’s not clear what happens next.

Many of us who are Thai, or of Thai heritage, follow, and feel, all of this here in Los Angeles.

As this latest protest escalated over Thanksgiving weekend, my mom—who uses technology about as much as a vampire cooks with garlic—asked to borrow my iPad so she could watch live updates when she’s out running errands. Every evening last week, her TV was tuned to a live feed streaming over from Bangkok. My cousin switched from Verizon to T­Mobile because he needed unlimited data to stream the feed during his two-hour commute to and from work. Last month alone he consumed 10 gigabytes of data on his phone, not counting the broadband Internet he used while watching at home and during breaks at work.

Thais in Los Angeles aren’t just following the news, either. They attend talks and rallies when Thai politicians come to town. They’re passionate about the issues, and they feel invested in this fight. Most Thais I know have taken a side, and a good number of them feel very strongly that their side is right.

The Thai community in Los Angeles—estimated at around 80,000 people—is centered in Thai Town, a mile-long stretch of Hollywood Boulevard between the 101 Freeway and Normandie Avenue. There is also a large Thai Buddhist temple in North Hollywood that serves as a gathering spot for Southland Thais on national holidays, with a number of Thai businesses and residents in the surrounding community. A few smaller Thai temples and communities are scattered throughout the San Fernando and San Gabriel valleys.

I have a large extended family here in Los Angeles, and every one of my relatives has lived in the United States longer than he or she lived in Thailand. Despite this, at family gatherings I hear only the slightest chatter about American politics, while emotions continue to run high over what’s happening in Bangkok.

The world’s most powerful nation elected its first African­-American president? Never mind that—boy, this chicken is delicious … who marinated this?

The friend of a friend shared a rumor about an unpopular Thai politician that contradicted an inconsequential thing he said in a TV interview two years ago? Let’s dissect that bit of conjecture for an hour over dinner!

Both of my parents were the first in their families to immigrate to the United States when they arrived here in the late 1960s seeking education and economic opportunities. Back then, there were so few Thais in Los Angeles that my parents—who were not people of means and influence—were invited to hold their wedding ceremony at the Thai consul-general’s residence in Beverly Hills. I was the first in my family to be born in the United States. My parents were working full-time and going to night school at the time, so my mom flew with me to Bangkok when I was an infant and asked my grandparents to take care of me for a short while. That short while turned into years, and I met my parents for the first time when I finally returned to Los Angeles at the age of 5. Throughout the 1980s, many of my mom’s siblings, nieces, nephews, and cousins immigrated here. Most of them joined the growing business that my mom started with two of her brothers in downtown’s jewelry district.

But we never lost touch with politics in Thailand. Here’s an oversimplified account of where the country stands. Over a decade ago, a business tycoon named Thaksin Shinawatra—the current prime minister’s brother—founded a populist political party that appealed to the rural poor who make up the majority of the country’s approximately 64 million people. In 2001, Shinawatra became prime minister.

Shinawatra’s populist policies are primarily rooted in the concerns of his geographic electoral base. He commands widespread support from constituents in Thailand’s northern region—where he was born and raised—as well as the populous and agrarian northeastern region of Isan. These two regions have their own unique cultures, and their dialects are distinct from the Middle Thai spoken in Bangkok—the Isan dialect is actually a form of Laotian.

The group opposing Shinawatra is comprised of a coalition of various political parties that represent Bangkok’s political and socioeconomic elite, as well as its educated middle class. The Thai military—which at times has operated on its own agenda—has historically supported the opposition group, albeit with restraint.

In 2006, a non­violent military coup removed Shinawatra from the prime minister’s office. In 2008, Shinawatra was convicted of corruption. He has lived in exile with most of his assets frozen ever since. That did not do much to diminish his popular support, and his sister, Yingluck Shinawatra, became prime minister in 2011. This sparked accusations that Thaksin Shinawatra was leading by proxy while in exile.

The current prime minister’s detractors are angered by what they perceive to be blatant corruption by the Shinawatra camp, from buying votes at election time to lining their own pockets to the detriment of the country. The government introduced an amnesty bill this year that many opponents believed would enable Thaksin Shinawatra to be cleared of his corruption conviction and return to Thailand. Last week’s protest was organized with a call for Yingluck to step down.

My mom’s family is part of the large Chinese diaspora that spread throughout Southeast Asia. They have middle-class values, are based in the Thonburi district in Bangkok, and support the opposition group. Most Thais, I think, are resigned to the belief that corruption is an unavoidable part of their government. A friend who sells software to Thailand’s various government ministries tells me he prefers it when the Shinawatra folks are in power; he has to offer off-the-books incentives as part of his sales pitch no matter which political party is in charge, but at least with the Shinawatra group decisions get made promptly, instead of forever sitting in committee limbo. I’ve never met a person in the anti­Shinawatra camp who believed that the politicians they supported were squeaky­clean—just that they were much less poisonous than the alternative.

At rallies and demonstrations, Shinawatra supporters wear red (they’re often called “redshirts” in Thai). The opposing side has gone through a few different colors over the years, but every time there is a mass gathering you can be sure that each side is color-coordinated in a show of solidarity. Even here in Los Angeles, you will see Thais wearing their affiliated color when big events are unfolding back home.

Just imagine the disruption it would cause if, every year or two, hundreds of thousands of Republicans and Democrats took to the streets in party colors and shut down multiple blocks in key sections of Los Angeles for a week or more. In 2008, the opposition group shut down Bangkok’s international airport. Imagine if protesters shut down LAX. We complain about traffic when Obama passes through town for celebrity fundraisers and we can’t get home for two hours. But this sort of disruption jeopardizes the long-term economic health of a city like Bangkok, where traffic congestion already makes it nearly impossible to get anything important done in a single day.

I last visited Bangkok in 2010 with my wife and daughter, who was 3 years old at the time. My wife’s parents and brother live in Bangkok. We stayed near the center of one of Bangkok’s main commercial districts—just down the street from the home of Abhisit Vejjajiva, who was then prime minister and a leader in Thailand’s Democrat Party. On the last day of our trip, we received word that redshirts were set to march on the prime minister’s house in the afternoon. We hastily packed our bags and loaded them into the car. As we sped off, police in riot gear were already amassing up and down the street and preparing for the worst. Despite the scares, my relatives and I intend to keep going back.

Fortunately, the recent strife was put on hold last Thursday for the birthday of King Bhumibol Adulyadej. You know how it seems like the only thing Northern and Southern Californians can ever agree on is that In-­N-­Out Burger is the bomb? Well, in Thailand, the king is Big with a capital “B”—no matter what province you hail from or what color shirt you wear. So there were no protests on the king’s birthday. But who knows how long the quiet will last?

Just in case the action flares up again this week, my mom is prepared. A few days ago, she picked up a shiny new smartphone with, of course, an unlimited data plan.