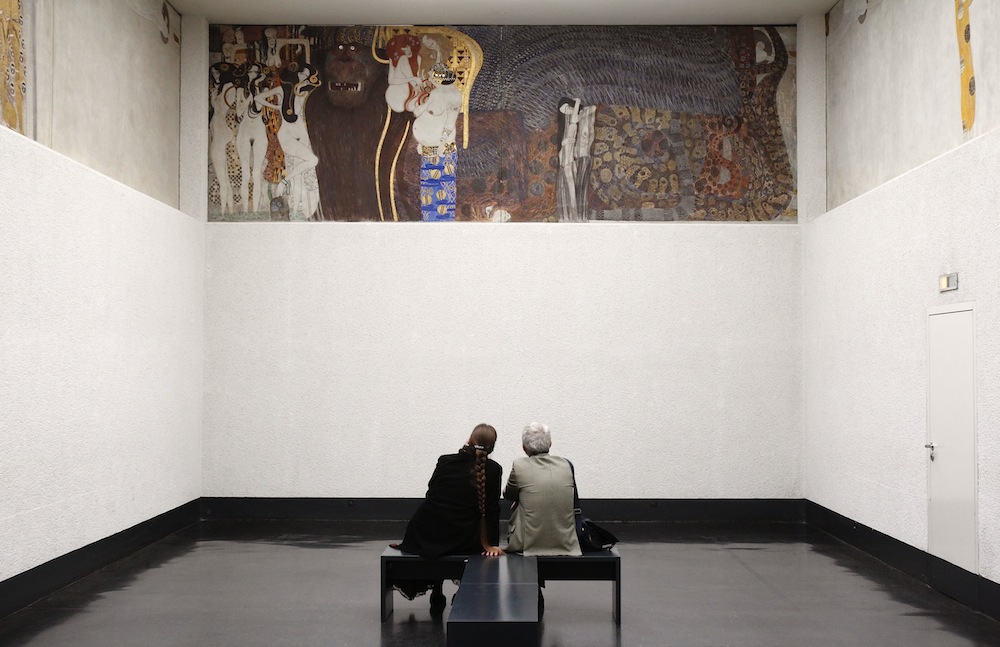 In the past few weeks, a Gustav Klimt portrait hanging in a show at London’s National Gallery was denounced as Nazi loot. A museum director in Vienna resigned in protest over his staff’s ties to a new foundation tainted by Nazi art theft. And a Munich art collector was discovered to be hiding perhaps a billion dollars of stolen art.

All of this must seem like a dream come true for publicists of George Clooney’s upcoming film, The Monuments Men, about the motley Allied crew charged with rescuing art from the Nazis during World War II. But many people were surprised by the flood of revelations, wondering: How can there still be so much stolen art at large 70 years after the war? 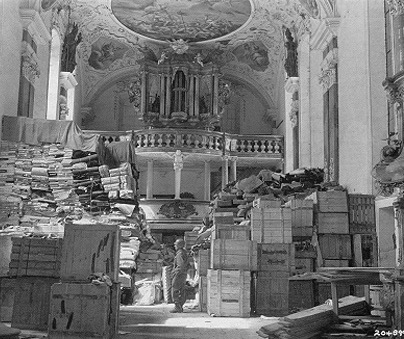 For decades, the keepers of Nazi-looted art have been playing hide-and-seek with the world, biding their time until various statues of limitations lapse. They have hidden behind archaic laws that complicate the return of looted works of art to their rightful owners—or they have simply refused to investigate red flags that suggest a dubious provenance for a work in their collection.

A 1997 study estimated that some 100,000 stolen pieces of art were still missing. Newspaper reporters were beginning to investigate the Nazi provenance of prominent art works on their own, embroiling museums in scandal.

In 1998, 44 nations met in Washington, D.C. and agreed to make efforts to find and publicly identify art that might be Nazi loot, and to find a “fair and just solution” for restitution. The agreement called for a central registry of suspect art, open to researchers. The pact was nonbinding, a collective moral pledge to transparency and justice.

Hundreds of artworks have been returned since 1998. But there has been no stampede of museums, auction houses, and collectors eager to comply with the still-unfulfilled commitment to create a central public registry. In much of Europe, laws still tolerate the “gray market” for stolen art. When a family spotted two paintings belonging to them in an auction catalogue in Germany recently, the anonymous sellers simply withdrew the works from sale and disappeared.

However, our hyper-viral media landscape has revealed the discreet shenanigans of the art world to a larger and far less tolerant audience. Social media is shaking up the issue, bringing long-overdue claims into the open—and showing there is a long way to go in complying with the moral obligations of restitution.

Take the case of the paintings and drawings stored in Cornelius Gurlitt’s apartment, an astounding cache of more than 1,400 works by such artists as Picasso, Matisse, Munch, and Cezanne, some of them reportedly stashed between the canned food in his pantry. From the moment the story of this art cache and its Nazi ties broke in the press in November, it went viral on Facebook and Twitter, sweeping across time zones and diverting attention from celebrity news.

Gurlitt’s artworks were acquired by his father, an art dealer named Hildebrand Gurlitt. Some of that work was pulled down from the walls of German museums in the late ’30s after being deemed “degenerate art”—modern art that Hitler viewed as not projecting Germanic values. Some of the paintings in his cabinet probably belonged to Jewish families.

After the war, Gurlitt repackaged himself—as many did—to deflect accusations of Nazi collaboration. He cast himself as a persecuted victim, claiming that he was dismissed as a museum director because of a Jewish grandmother, and that he lost his livelihood when the modern art he built his business on was deemed “degenerate.” The reality was more complicated: He was employed by Joseph Goebbels’ propaganda ministry to help sell “degenerate” paintings seized from museums, as well as other pieces of art confiscated from Jewish families. He was elevated to a position as curator for the “Führermuseum” in Linz, which Hitler intended to be the cultural crown jewel of the Reich.

In the confusion after the war, the real-life Monuments Men returned some of the art they confiscated from Gurlitt. That artwork was inherited by his son, Cornelius, and put in his closet. The drawings and paintings remained there for decades, though Gurlitt sold pieces occasionally for living expenses. German authorities found the art in March 2012 while investigating Gurlitt for tax evasion but remained silent about the discovery until a German magazine, Focus, broke the news in early November 2013.

It became clear that Germany was woefully unprepared to handle the firestorm that ensued. Bavarian authorities told an astonished public that they may have to return the stolen art to Gurlitt because the 30-year criminal statute on theft has expired. Unsurprisingly, there have been calls for this statute to be overruled and for such cases to be considered theft in the service of genocide, under the Nuremberg War Crimes framework.

Another curious legalistic impediment to justice cited by German authorities in the Gurlitt case is a 1938 Nazi-era law that is still on the books and provides for the legal seizure of so-called “degenerate art.” Germany should follow the example of post-war Austria and France, which passed laws declaring Nazi-era legal transactions “null and void.”

Restitution is not only judged in a court of law, but also in the court of public opinion, according to Stuart Eizenstat, an expert in Holocaust reparations. In an age of social media, these cases are playing out before a packed courtroom on Twitter, Facebook, and other websites. The rise of social media is amplifying restitution claims that got their first real hearing in the press.

Since the passage of a 1998 art restitution law, Austrian state museums have been forced to return a dozen masterpieces by Gustav Klimt, the country’s most famous painter. Klimt’s most significant portrait models, collectors, and patrons were Jewish modernists from the same milieu that supported psychoanalyst Sigmund Freud and other distinguished pioneers of turn-of-century Vienna. When the Nazis arrived in Vienna, they seized Klimt works and persecuted the artist’s Jewish patrons. This set the stage for a seemingly endless stream of contemporary claims that hit the media in the 1990s and continue to this day. Each ugly episode revealed an ugly story.

When a Vienna portrait show opened at London’s National Gallery in September, some people called for the seizure of its premier Klimt portrait of a bare-shouldered Amalie Zuckerkandl, who was murdered with her daughter in a concentration camp. The painting is in the permanent collection of Austria’s national art museum, which claims it has a clean bequest from an art dealer. But Los Angeles art restitution attorney Randol Schoenberg called for the painting to be held in London while the merits of the claim were considered.

In late October, the director of Austria’s Leopold Museum, Tobias Natter, resigned after just two years on the job after a member of his staff joined a new Klimt Foundation to showcase Klimt—and his illegitimate son, the late Gustav Ucicky, a Nazi propaganda filmmaker and art collector. “Ucicky collected in the Nazi era,” Natter told Bloomberg. “Why do we have to get into bed with these people?”

The Klimt Foundation is in discussions with the heirs of Gertrude Loew, whose ethereal 1902 Klimt portrait is among the four paintings and 10 drawings in the Foundation’s collection. The family said the painting was left with a baroness friend for safekeeping when they fled Austria. It is unclear exactly how it ended up with Ucicky, although top Nazis helped him to collect paintings by his late father—some of which had been stolen from Jewish families.

The Klimt Foundation is silent about the fate of another painting that Gustav Ucicky owned, “Water Snakes II.” The painting of sinuous floating women was confiscated in 1938 from Jenny Steiner, a Jewish cousin of Joseph Pulitzer. In 1940, when the painting was about to be sold at auction, Vienna’s Nazi governor intervened so that Ucicky could buy it.

The Austrian newspaper Der Standard reported in September that Ucicky’s widow, Ursula, had sold “Water Snakes II” to Qatari royals for as much as $120 million. Some of the proceeds went to Steiner’s heirs—and the rest went to Ursula Ucicky, who was setting up the Klimt Foundation and might need to reach a settlement over the portrait of Gertrude Loew, according to Der Standard. No one—including Sotheby’s, which was reported to have brokered the sale—has commented.

There is a good reason for the silence. If this is all true, a foundation for Austria’s finest painter, created with the help of proceeds from Nazi loot, is an outrage that would not be lost on the public. These kinds of messy details are one reason that authorities are reluctant to open the files on collections like the Gurlitt hoard: They know it won’t be pretty.

Yet the ongoing Nazi art theft debacle in Munich may prove to be a “teachable moment,” in the words of Holocaust restitution expert Marc Masurovsky. The whole world is watching. It is still possible for Germany to confront this moral challenge with grace—and set a dignified example for other countries that may be forced to confront belated Nazi art theft restitutions of their own.