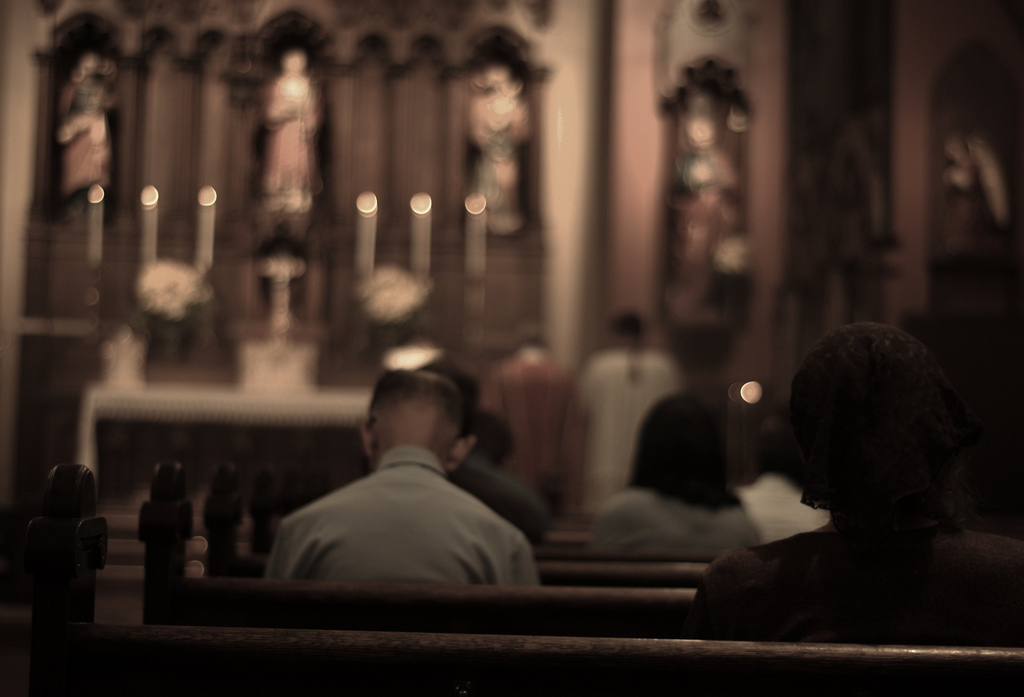 I set foot in a Catholic church today for the first time in decades. I am one of those lapsed Catholics you’ve heard about. There are millions of us around the world who have long felt alienated and unwelcomed by the church’s regressive policies. We became weary of a church that claimed to be loving and forgiving but was the exact opposite.

The funeral was for my friend’s mother, Alicia—a formidable Cuban matriarch who left behind a beautifully close and immensely bereaved family. Driving into the church parking lot, I recognized the dome and ornate architecture of the churches I’d grown up in. Inside, the chapel was spacious and flooded with shafts of sunlight streaming through the glass-stained windows along the nave walls and around the cupola high above the crossing. The light seemed to coalesce around the altar, lending a strange luminescence to the murals around the apse.

The service was as formal as I remembered, but everything else was different. I’d expected judgment or condemnation. Instead, I was beckoned to forgive and be forgiven. It felt tender and loving.

I truly couldn’t remember the last time I had gone to church. My early years were spent in the small town of Reynosa in northern Mexico in the 1960s, when almost every facet of the culture was ruled by Catholic religiosity: Men and women were supposed to follow strict gender roles, sex was forbidden before marriage, and any unsanctioned behavior having to do with the body triggered guilt, shame, and persecution from all quarters.

I was a young gay kid wrestling with feelings that were definitely not sanctioned—not by church, not by society, and not by my parents. It was made worse for me by the fact that I couldn’t hide my gayness. I was a sensitive kid, interested in learning and the arts. I wore glasses and carried too many books. I used to dance in the talent shows, and my mother dressed me in little suits with matching shirts and shorts, which usually prompted a beating in the schoolyard. It was all out there in plain sight, and so I learned early to shield myself against a world hostile to my kind.

As an outsider, you long for someplace safe to belong, and until I was 8 or 9 years old, the Catholic Church fulfilled that for me. My parents were not religious and did not go to church much except for holidays like Easter and Christmas. It was my grandmother who used to take me by the hand each Sunday and walk me downtown to the main church across the plaza. It was a cavernous structure filled with life-sized statues of rosy saints and virgins, the sounds of the choir and organ, and the smell of clouds of incense, which nearly asphyxiated me on a weekly basis. On Palm Sunday, my grandmother would buy palms from the dozens of vendors stationed outside.

Then the church stopped being safe for me. I had to attend weeks of catechism school before being allowed to take the wafer of my first communion. I befriended a boy I sensed was also gay, and the two of us became inseparable. Our teacher was a lovely old lady named Doña Carmelita. But before our final class, a priest came to speak to us. I don’t remember his name. I only remember that he stared daggers at my friend and me while he spoke of “sins of the flesh” and how girls need to “cover themselves” and boys must not “touch themselves”—and how he became especially angry when he said the biggest sin is for “boys to touch each other.” “How dare you!” I wanted to scream at him. But I didn’t. I just sat there and listened, chastised.

After that, my excitement for the church tapered. Eventually, I stopped going altogether. I was angry and isolated, finding no solace in a church that considered me an abomination. So I left and never looked back. I said “Fockate” to the Catholic Church, in Spanglish.

Why would I continue to follow a church that actively discriminated and encouraged others to discriminate against people like me—and other groups of people considered less worthy in God’s eyes? Like most religions, the church teaches that divine salvation is every human’s birthright, yet does a brisk business denying it daily to its own followers.

My break with the Catholic Church, and a disdain for all organized religion, has sustained me throughout my adult life. Living in cosmopolitan areas like New York and Los Angeles, many of us lead a secular life; we make an art of deriding the church and its prelates as jokes and brazen hypocrites. Over the past few years, it was easy to become downright outraged by the church’s criminal child abuse.

However, sitting there, praying for Alicia’s soul, I felt a sense of peace and relief that I had not experienced in quite some time. Suddenly I was back in the church of my early childhood, lying on my grandmother’s lap, listening to her high-pitched singing along with the choir. Tears began to roll down my face. I could see the beauty and love and goodness that the Catholic Church is supposed to embody. The omnipresent and debilitating shame and guilt I remembered were nowhere to be found.

I closed my eyes and opened my heart as I prayed for Alicia’s soul. I also prayed to be forgiven by all those I have judged not worthy of my love. I prayed for the strength to forgive those who have wronged me and to let go of my anger and resentment against them.

The only words that can describe that moment seem cliché, and almost embarrassing for someone who’s spent so long joking about the church. But it was truly a religious experience and a spiritual homecoming. I was back where I began, but seeing it all for the first time.

Will I go back to church regularly? I don’t know. I do know that people like me are feeling a new kind of welcome there—maybe because times have changed, maybe because of Pope Francis, maybe because we have changed, too. And I know, too, that I was meant to go that day, and that Alicia’s spirit brought me there to receive the healing I needed. Events conspired—a canceled flight, a case of the flu—in making my return to the church possible. I wish Alicia Godspeed, and offer her my thanks for giving me what I had been missing.