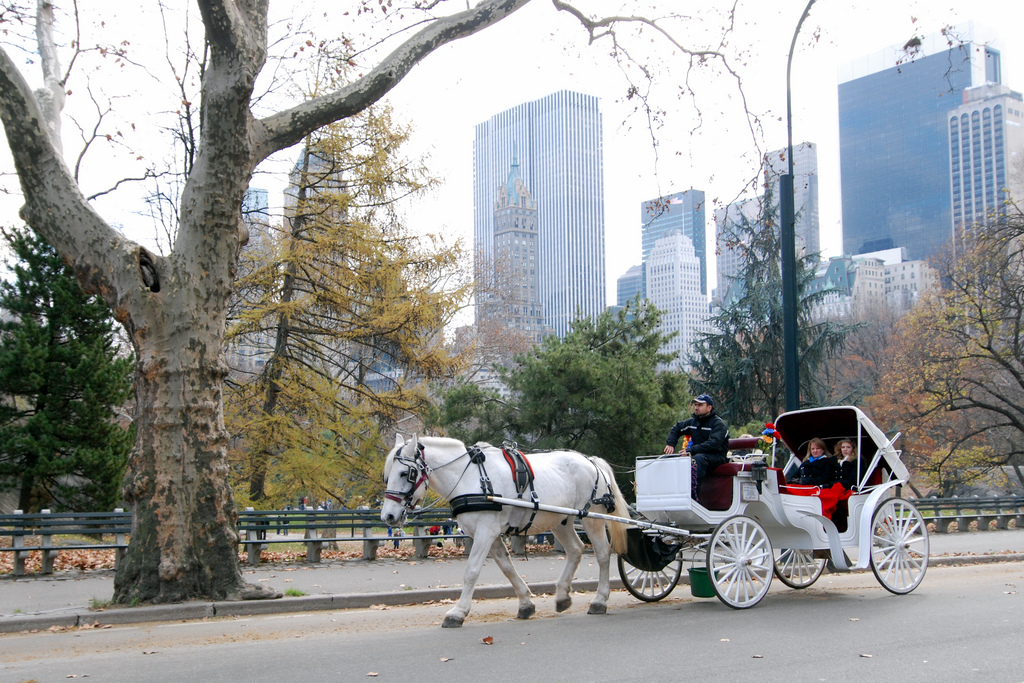 I share at least one thing with the people who want to get rid of carriage horses in New York City: I love animals. (Except rats, and I still wouldn’t want them to suffer.) I’ve given money to the ASPCA in memory of a dog. I’ve taken a duck bitten by a dog to a somewhat astonished vet. And horses have been in my life since I started riding as a young girl. Riding is collaboration between man and horse, and you quickly learn that it’s impossible to get a 2,000-pound animal to jump six-foot fences unless it wants to.

While I’ve never taken a carriage ride in Manhattan’s Central Park, I’ve petted the sweet-smelling horses as they stand lined up, noses in their feedbags, while sparrows jump about them on the prowl for loose grain. Tourists snap pictures of the hansom cabs and the drivers in top hats, and the atmosphere is one of romantic obsolescence.

So I was upset when New York’s new mayor, Bill de Blasio, made his first order of business to go after these carriages. “We are going to quickly and aggressively move to make horse carriages no longer a part of the landscape in New York City,” he promised in a news conference after his election. “They are not humane.”

Perhaps de Blasio believes that all horses should be roaming the plains in freedom as “living symbols of the historic and pioneer spirit of the West,” as described by the Wild Free-Roaming Horses and Burros Act of 1971. Or perhaps, as a number of people have suggested, de Blasio was influenced by campaign contributions from developers with an eye on the stables. Whatever the case, the mayor is not only destroying the livelihood of 300 of the working citizens he claims to be in office to help. He is also pushing a policy to which even the horses themselves might object.

To be sure, the city environment is not ideal for horses—or, for that matter, humans. Evolution has not designed any species to walk on hard asphalt, to compete for space with cars and trucks, or to breathe in polluted city air. But, as Dean W. Richardson, a professor of surgery and chief of large animal surgery at the University of Pennsylvania School of Veterinary Medicine, recently wrote in The New York Times, “horses have been a domesticated species for a very long time and adapt surprisingly well if they are given appropriate care.”

The life of a New York City carriage horse is actually not bad. Unlike the mustang, it doesn’t have to find food or water, nor must it avoid the wrath of ranchers or flee federal roundups—from which many horses are possibly being sent to the slaughterhouse, in spite of laws of prevent it.

Also, unlike millions of Americans, carriage horses have a job, one with enviable privileges. How many Americans are guaranteed a workday lasting no more than nine hours, with compulsory time off when the Fahrenheit temperature falls below 18 degrees or rises above 90 degrees? How many of us are legally entitled to a small dwelling, equipped with soft padding on the floor, running water, and a healthy diet, all under the supervision of a medical professional appointed to safeguard our interests? And how many of us get five weeks of mandatory vacation?

I bet Manhattan’s pedicab drivers look with envy at the benefits that the city’s horses take for granted.

Some people say horses are obsolete. “It’s the year 2014,” Allie Feldman of NYCLASS (New Yorkers for Clean Livable and Safe Streets) told MSNBC. “There’s no reason to have a horse drag a tourist around the city anymore. There are so many things to do in New York City without putting an animal at risk. New York City is better than this.”

True, this is 2014, and the city does not need horse-drawn carriages. Nor does Rockefeller Center need an ice-skating rink or a Christmas tree. Nor does Britain need the royal family. But think how much poorer the cityscape would be without this tradition, which dates back to 1858.

Some people say horses are dangerous. “These sensitive animals become unwitting weapons who can kill or injure themselves or passers-by,” writes Elizabeth Forel of Coalition to Ban Horse-Drawn Carriages. Yes, horses can be dangerous, if improperly controlled. But horses have not caused a single human fatality in New York City.

Even if the horse-drawn carriage were banned, what would happen to the horses? According to the mayor, they would go to “sanctuaries.” But, unless they get to run around in pastures all day long, horses, like humans, want to have a job. When they are deprived of a daily work routine, they get bored and develop any number of number of disorders, including cribbing, pawing, weaving, blanket-chewing, head-bobbing, and other repetitive actions.

The horse is a beast of burden, however harsh that may sound, and without its burden—as a draft horse, racehorse, show jumper, dressage artist, circus performer, or pony-ride pony—it serves no obvious purpose in the modern world. Unlike dogs, whose lives now imitate those of humans to a frightening degree, horses are too big to jump into bed with you, and they don’t take well to the latest fashions in rainwear. Horses will never be house pets. Still, if permitted, they can remain valued equine companions to their owners and indispensable partners to carriage drivers. And, if the mayor remains incapable of getting the streets plowed during snowstorms, a saddled-up horse can offer good transportation, too.