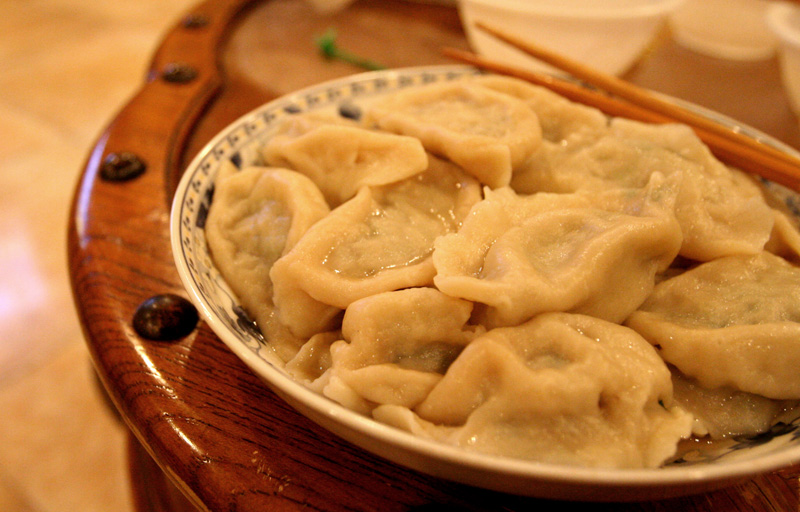 When I taught a course called “Food and Culture” at UCLA, I loved asking my students to investigate their families’ food histories by focusing on one feast or reunion—and then thinking about how food touches everything: nutrition, economics, and culture. Inevitably, many of my students wrote about their families’ new year’s celebrations. The two most common topics were the tamale-making traditions of my Mexican and Central American students for Christmas and the new year, and the Lunar New Year celebrations of my Vietnamese-, Korean-, and Chinese-American students. This year, the Lunar New Year falls on January 31—the first day of the Chinese Year of the Horse.

When it comes to my own family’s new year’s food, our traditions stem from my mother’s search for farm-fresh fruits and vegetables and good meats from her local butcher in late 1950s California. Although my family lived in the heart of California’s main agricultural producing region—in the Central Valley city of Fresno—this was long before food movements emphasized natural and organic. Taking a cue from Mom, I now start the new year by preparing a simple roasted chicken stuffed with Meyer lemons from my front yard garden and crushed garlic bulbs still in their skins.

Chicken is symbolic for my family and me, since we descend from a long line of struggling farmers. My chicken holds the promise of better times. But it’s also affordable and reminds us to be humble. My mother-in-law makes a pot of black-eyed peas for much the same reason: Some foods ground us and help us remember the past through preparation alone. The added benefit of black-eyed peas (or any bean) is that they are considered a “lucky” food by people all over the world.

Every quarter, my students found striking similarities in the meanings of all our new year’s gatherings, similarities that cut across their regional, ethnic, and cultural differences. The powerful ideas of renewal and reawakening pack all of these hopeful celebrations—many of which include foods eaten for luck and dishes that require extensive preparation. But students also found themselves asking bigger questions: Who are they and where do they fit in this world? Can looking closely at our food traditions provide us with answers to who we are, where we come from, and how we move forward in an auspicious manner? What it is about this time of year that connects and reconnects us to food?

The answer is that while we think of winter as bleak, it’s in fact a time of rebirth. Winter Solstice festivals around the world begin the seasonal homage to the gods, to our ancestors, and to our harvests, as the sun begins its reversal of lengthened nights and shortened days. People have celebrated this change for at least 10,000 years. Ancient Persia in the Fertile Crescent where agriculture is believed to have originated, marked the victory of the sun over darkness with the Deygan Festival, which features the consumption of dried nuts and watermelon for health and pomegranates as a reminder of the circle of life. Hogmanay in Scotland transformed from a celebration to say goodbye to winter into a holiday to welcome the new year: Visitors gave householders black buns to bring the host families luck. The third-century Roman Empire paid honor to Sol Invictus—the undefeated sun—on December 25 throughout the empire. In the fourth century, Sol Invictus practices (gift giving, public singing, human shaped sweets … gingerbread men anyone?) were subsumed under emerging Christian festivals. Another of the more ancient Roman festivals, Saturnalia, paid honor to Saturn, an agriculture god who was believed to have reigned over abundant harvests. Reflecting on the good old days, nostalgic Romans began their festivities with a public ritual sacrifice, a lush banquet, and a carnival atmosphere that turned Roman social norms upside down. Slaves were treated to a full banquet by their masters and briefly enjoyed the leveling of the strict social hierarchy.

The Winter Solstice celebration that most resembles modern New Year traditions is the Dongzhi Festival which was (and is) celebrated widely in East Asian countries, especially China, Korea, Vietnam, and parts of Japan. Traditions include family gatherings, honoring ancestors, the making of tang yuan—glutinous rice balls—and soups made with sweet red bean, a doubly lucky food because it’s red (a lucky color) and a bean.

About a month or so later, in late January or early February, these East Asian countries usher in the arrival of spring and celebrate the new year. Preparations for the Lunar New Year begin a week or two before the festivities. Debts are paid, homes are scrubbed, and relatives return from far away. A fresh tray of five fruits is offered to ancestors at the family altar. The themes of good fortune and happiness are reflected in the gifts of red envelopes containing “lucky money” for children and in the foods prepared for the reunion dinner on New Year’s Eve. The traditional Chinese New Year’s Eve reunion dinner features dishes eaten for their meaning: pork to symbolize prosperity, chicken to show how humble families should remain, uncut noodles for longevity, mandarin oranges, the most abundant fruit in China, and jau gok, the main Chinese dumpling.

South Korean village traditions included paying homage to ancestors who helped them arrive on this earth, followed by a feast with man-du (stuffed dumplings), kong-dan (ricecakes formed into balls covered with finely sliced fresh chestnuts and Korean dates), and ddokkuk, the New Year’s essential soup. In Japanese villages, homes must be cleaned, bright holiday clothing is either sewn or bought, and ingredients for festive foods are readied on the last day of the old year. The New Year begins with three days of socializing and feasting. For the families in these villages, rice is the stuff of life, and mochi, a highly glutinous rice steamed, pounded, and shaped into rolls, and “red rice” (rice mixed with red beans) are the two most popular new year’s dishes.

Just a few years back one of my Vietnamese American students reported that to fully participate in the New Year, or Tet, is to “an Tet,” meaning to “eat Tet.” Banhchung and banh day—tightly bundled packages of sticky rice wrapped in banana leaves—represent the earth and the sky respectively, and are essential to Tet celebrations.

These extensive preparations give women, especially, time to catch up on the latest family gossip and to get a refresher on origin stories to pass down to their children. Such remembrances are also at the heart of the tamale tales my students write about—tales that bring together mothers, aunts, and grandmothers to grind maize to make the masa and to wrap tamales in banana leaves or corn husks, each with the family’s secret ingredients to make them unique. Before my students interviewed family members, they often had no idea why their favorite foods were so meaningful or what went into their preparation. As budding anthropologists, they learned from participating in the food-making process—from the planning, shopping, and preparing to the eating and clean-up afterwards—and were able to better grasp both traditions and the recipes that fuel them.

In the early 20th century, the South African Nkuna performed a ceremony called “to eat the new year.” Special pumpkins were cooked with medicine used for rainmaking “to eat the new year” right, and to ensure a healthy and prosperous future. Because there was much feasting and drinking, people called to one another, “Let us eat peacefully! May we not slay each other under the influence!” If this Lunar New Year you plan to “eat the new year,” in the spirit of this wise advice from the Nkuna people, I wish you the following: May we remember our family, the ones that are here and ones that are gone! May we honor our land and our food seeds and keep them safe for future harvests!