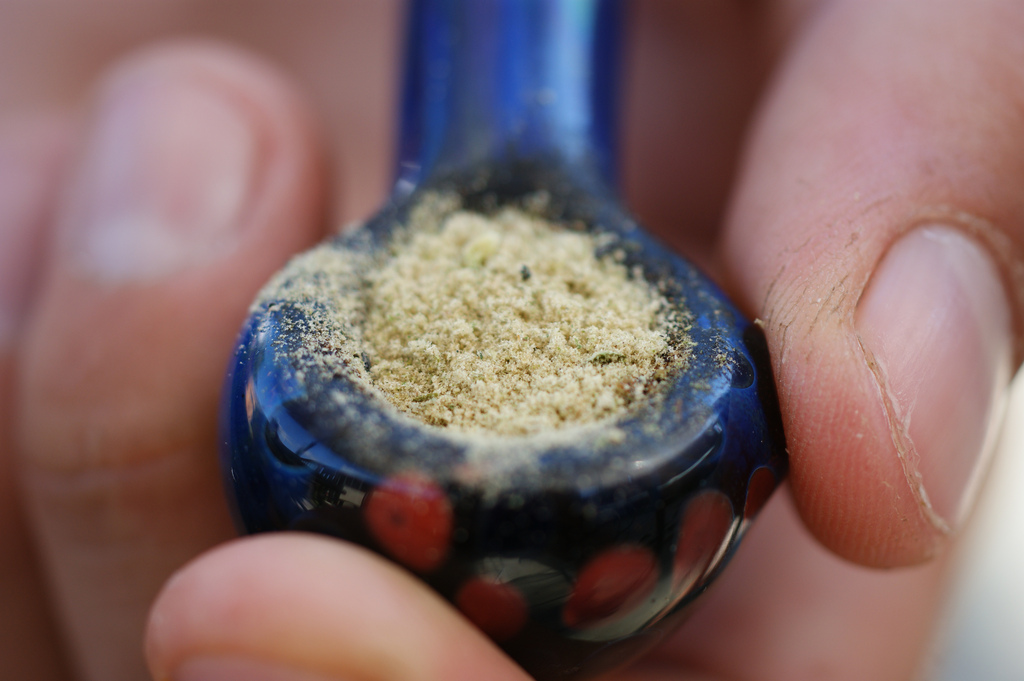 There will be smoke at the 2014 Super Bowl—at least in the living rooms of some Seattle Seahawks and Denver Broncos fans. Sunday’s contest pits the two states that have legalized weed, Washington and Colorado, against each other in what ESPN columnist Bill Simmons has dubbed the “Doobie Bowl.”

Colorado and Washington each legalized marijuana for recreational use more than a year ago, and this year, they will become the nation’s first states to sell over-the-counter weed to anyone 21 or over. I’m a diehard NFL fan, the editor-in-keif of Weedmaps.com (an online guide to marijuana dispensaries), and a relatively new resident of Denver (who still roots for the football Giants, who are hosting this Super Bowl in their stadium in my native New Jersey), and so you can imagine that I’m pretty stoked about what this contest might mean. Regardless of whether legalization is a cause or a meaningless correlation to these two teams’ success, this head-to-head matchup begs the question: Which state is doing a better job of legalizing marijuana?

First things first: It’s a bit early to know which state will win this game. Washington state’s new legal weed laws aren’t supposed to go into effect until June. In the meantime, Colorado has taken an early lead. The state began selling legal, over-the-counter pot on January 1 of this year, and fans from around the world have taken advantage, flocking to what’s being called “The New Amsterdam.”

People from all 50 states and every continent excluding Antarctica have traveled to the Weedmaps.com office here in Denver and to the Clinic on Colorado, which is also a medical dispensary, to purchase recreational cannabis. I’ve personally bumped into people from Sweden, South Africa, Mexico, and even Libya. On the first day of the new year, I interviewed a grandmother who had come with her family simply to experience history. And I’ve spoken with a number of veterans from the Iraq war who suffer from PTSD, and are thrilled about what legalization means for people like them. The vibe has been not only historic and emotional, but also futuristic, as though Coloradans are glimpsing a time when every state will have legalized marijuana, and every Super Bowl thus will be a legal Smoke-A-Bowl. (Los Angeles, perhaps there’s a lesson here for you. Could legal pot in California help you bring back the NFL—and maybe even get a decent team?)

Washington state is playing catch-up. For the next six months, the Evergreen State will continue hashing out its policies and vetting prospective marijuana business owners. The state has been flooded with over 2,000 applicants, some of them purportedly not real businesses. Washington’s State Liquor Board Control handles the implementation of I-502, the initiative that makes marijuana legal there. But while the board has made recommendations, laws have not been finalized and remain in a state of limbo. Lawmakers in Washington anticipate recreational sales beginning in June, but that date is subject to change. Although the Liquor Control Board has attributed the delay to a desire to be careful, Washington’s implementation is mired in debates among growers, dispensary owners, counties, and municipalities.

This doesn’t bode well, given the state’s history. Medical marijuana was legalized in Washington back in 1998—but it wasn’t until 2010 that the state allowed fully operating dispensaries to serve patients. Colorado’s efforts, like the Broncos’ offense, was more hurry-up; Colorado voted to make medical marijuana legal in 2010 and almost immediately made it a reality.

Today, medical patients in both states can grow cannabis plants legally. However, in Colorado, growing is much easier, as “caregivers” (any person with a grow license—not just dispensaries) have more flexibility to grow more plants—upwards of 200 plants, which yield 300 to 400 ounces of marijuana. Like the Seahawks’ offense, Washington’s approach is more conservative and plodding: Medical marijuana patients can grow up to six plants in their homes, and the state’s proposed rules for recreational marijuana require you to have a medical card to grow. Under Colorado’s recreational rules, anyone can grow up to six plants in his or her home.

There is one area in which Seattle has the clear advantage over Denver: delivery, at least for medical patients. Unless patients are wheelchair-bound and have a written exemption, delivery services for cannabis are completely illegal in Colorado. That means you have to leave your couch to buy weed in Denver. In Seattle—like in California—it’s only a phone call away. You call up the delivery service, place an order for the weed, hash, or edibles you want, and they arrive at your doorstep faster than a pizza. (After all, you don’t have to cook the weed.) Show your medical marijuana card to the delivery person (like in a dispensary), and you’re good to go. Most of these transactions are of the cash variety, as many dispensaries and delivery services don’t accept credit cards.

While we’ve covered growing and buying, a key question remains: Which state’s got a better stash? It’s a matter of personal preference, and probably impossible to say for sure. Thanks to the high altitude, Colorado’s weed has a reputation for being more dry, which means it burns and dries out more quickly. For the most part, the strains grown there originated in Amsterdam. Colorado’s hash has a better reputation than its standard pot. Washington’s strains come from Northern California and British Columbia for the most part, and the pot from there has a more tropical vibe. In the end, it’s a toss-up, and you can get great weed in both states.

But think twice before you buy a plane ticket to Denver to cheer on the Broncos while getting high with local fans at the bar. Just because weed is legal doesn’t mean lighting up in public is legal. In both states, it can get you fined up to $300. While you’re allowed to smoke on your front porch in Denver, you’re technically not allowed to smoke in bars, restaurants, or clubs, pursuant to the state’s Clean Indoor Act. That said, from what I’ve heard and seen, very few fines are being levied by policemen for smoking in public. If you smoke discreetly in either state at the right venue, you should be good to go.

Who wins the Doobie Bowl? One team’s fans will smoke up in celebration come Sunday night. The other’s will just have to console themselves—legally, of course.