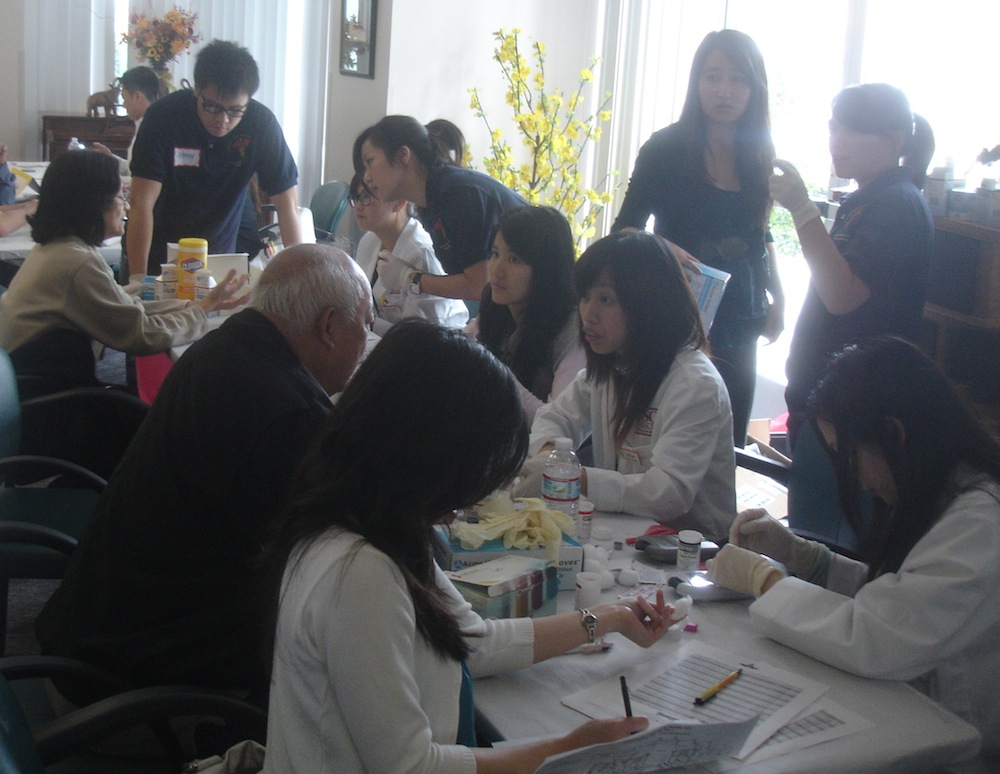 I met Mr. Pham two years ago as he sat in line at a health fair in Garden Grove and anxiously tapped his feet. I was a volunteer that day, assigned to help navigate patients to each of several stations and to make sure patients had been screened. It was at once a triumph and a tragedy that he was there. The month before, after years of avoiding medical care despite a diabetes diagnosis, a fainting spell had sent Mr. Pham to the doctor, and a screening test had revealed dangerously low levels of blood glucose. Mr. Pham, who ignored the symptoms as he worked six days a week for minimum wage at a local grocery store in nearby Westminster, was here to follow up.

The organizer of the health fair was not some Orange County hospital but Vietnamese Community Health (VCH), a nonprofit entirely run by UCLA undergraduates. Back in 2006, students founded the organization to hold fairs in and around Westminster with the goal of serving the huge Vietnamese population there. (Nearly 200,000 Vietnamese-Americans live in Orange County; over 40 percent of residents of the city of Westminster are Vietnamese-American.) At first, the undergrads donated their own money to get VCH on its feet; students later applied successfully for grant funding from UCLA. The university still provides the bulk of VCH’s budget, but medical providers in Orange County chip in, and VCH holds food and bake sales on campus, and restaurant and car wash fundraisers in Orange County, to raise money. Vietnamese newspapers and radio stations offer free advertising; one paper, the Nguoi Viet Daily News (“Nguoi Viet” translates to “Vietnamese people”), lets VCH hold health fairs in the conference room of their Westminster headquarters free of charge. Having the support of well-known organizations like the newspaper and community members like Senator Lou Correa are of utmost importance in building trust in our services.

I was a UCLA freshman and aspiring physician when I saw a flyer for VCH and began attending meetings, then working at fairs and other events. My volunteer work helped people, and it also helped me. I got a chance to bond with students of similar backgrounds (I’m the son of Vietnamese immigrants) and interests (namely health and medicine). I became a staff member for VCH in 2009 and a board member in 2010; since graduating from UCLA in 2012, I’ve continued volunteering regularly at events.

My father immigrated to the U.S. after the fall of Saigon in 1975 and found work as a computer technician; my mom, a nurse, immigrated here in the mid-1980s. I was born and raised in Long Beach, where I still live. Long Beach’s proximity to Orange County, and the experiences of my parents, proved useful in trying to get people healthcare. Growing up, my parents worked even when they were sick because they didn’t want to sacrifice a workday in order to go to the doctor’s office. And when they did go to the doctor, they were often dissatisfied with their visits, in some cases due to language barriers.

In these ways, they were too much like the people we see at VCH health fairs—people who have avoided medical care and have untreated hypertension, diabetes, and high cholesterol as a result. From my freshman year to this day, our work has felt particularly urgent.

VCH holds one health fair each quarter; the fairs offer services including consults with a physician and dental consultations, glucose and cholesterol screenings, vision screenings, mammograms, hypertension screenings, and Hepatitis B screenings. We reach out to physicians, medical students, dental students, pharmacy students, and optometrists to volunteer their time and operate the different stations at the health fairs. We also have 30 to 40 VCH undergraduate volunteers attend each health fair to help with the screenings, translate for patients, take blood pressure readings, and make sure the lines are orderly. VCH rents vans and cars to transport students from Westwood to our Orange County events, and we typically serve between 200 to 250 people at each health fair.

But the health fairs are only one piece of what VCH does. We also hold five different, smaller “health sites”—with a booth set up at a supermarket or the Asian Garden Mall to promote health education about common diseases that affect the Vietnamese community and to receive hypertension screenings. These booths typically attract between five and 10 patients; another 10 or 20 folks stop by for information. Every spring, we hold a children’s health carnival and work with elementary schools in Orange County to put on a fun—and informative—event that encourages better children’s health habits. Each booth has a game centered around specific health topics, including eating balanced diet and the food groups, dental hygiene, and daily exercise. And we serve as the first aid booth at the annual Union of Vietnamese Student Associations New Year’s Tet Festival in Westminster.

We also have established a referral program with a local health clinic, the Nhan Hoa Comprehensive Health Clinic in Garden Grove, so that we have a place to send patients interested in additional medical care for minimal cost. The clinic’s social workers enroll patients in Orange County’s government-subsidized health program, the Medical Services Initiative, which provides a basic form of health coverage for underserved patients.

We’ve helped a lot of people, but funding is a continuing concern. In some quarters, we’ve had to limit some screenings (like Hepatitis B) because we didn’t have sufficient funds to cover the costs of laboratory samples.

But I’ve seen what these screenings and our fairs can do. On the recommendation of physicians he met at the health fair, Mr. Pham purchased an inexpensive blood glucose device and discounted test strips that allow him to monitor his glucose levels at home. We also referred him to a dietician at the Nhan Hoa Clinic to help him control his glucose levels, free of charge.

He tells me he keeps coming back to the VCH health fairs—not only for the free healthcare but also because he loves being able to communicate in Vietnamese. In a space where he can be himself, he’s able to take care of himself, too.