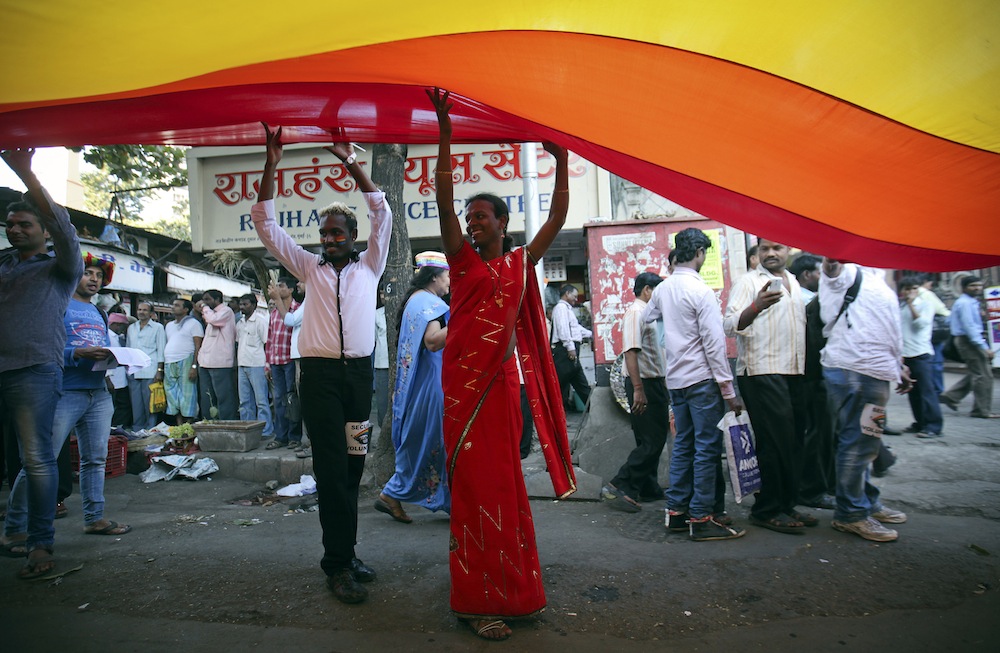 Last Tuesday, India’s Supreme Court reinstated a law that has turned me, along with millions of other Indians, into a sexual criminal.

Four years ago, a lower court decision struck down this same law, which bans “carnal acts against the order of nature.” Its reversal is a shock to liberal urban India and a significant setback for the lesbian, gay, bisexual, and transgender people here. And, perhaps most dangerously, it has energized a radical right-wing fringe that no more represents the average live-and-let-live Indian than does RuPaul.

I was born in San Francisco, raised in New Zealand and Michigan, and have lived most of my adult life in the Bay Area. When I visited India in 2009, I was pleasantly surprised to find a vibrant LGBT movement. The night I landed in Mumbai, I ended up at a party where 60 or so lesbian and bisexual women had gathered to dance, drink beer, and eat biryani. I wondered aloud to a new friend: How I had missed this hot queer scene before? Had I been too wrapped up in family and work on previous trips to India in the 1990s?

“You couldn’t have found us,” she told me. “Back then we would spread the word, by phone, to meet at a certain restaurant at a certain time. Then we’d each show up with a red rose, so we could find each other.”

This revolutionary shift in the lives of LGBT people in India is mostly due to the 2009 decision to reverse an archaic law known as Section 377. Since 1861, the law had been used to harass, blackmail, and occasionally prosecute people suspected of engaging in sodomy. Also targeted in recent decades were HIV workers trying to conduct outreach and distribute condoms among transgender people and men who have sex with men.

“[The] underlying theme of the Indian Constitution … is that of ‘inclusiveness,’” the lower court said in 2009. It noted that tolerance for difference is “deeply ingrained in Indian society, nurtured over several generations … [and] traditionally displayed, literally in every aspect of life.”

Since moving to India in 2010, I’ve seen that inclusivity every day; it’s hardly optional, in a dense population where people of all castes and creeds live in close proximity. When it comes to gender expression, visitors are often struck by how Indian men hold hands in the streets openly—not as a romantic act, but as part of a range of masculine affection that’s wider than what is available to most Westerners. The local transgender community, though impoverished and often scorned, has deep historic roots and an acknowledged role in society. Ancient sources of same-sex eroticism and transgender identities in India, from texts to sculpture, are well documented.

In the wake of the 2009 decision, an Indian who loved someone of the same gender was no longer a criminal, for the first time in nearly 150 years. People gathered publicly without fear of police raids, underground organizations brought their work into the light, and community businesses emerged. And thousands of people began to march in LGBT rights parades.

For me, the energy of these events was electric. I came out, to myself and to my family, as a college student in California in 1991. I had marched down Fifth Avenue in New York City, and along the Embarcadero in San Francisco. But by the time I left the United States, I was so coolly jaded that I hadn’t been to a Pride parade in years.

Here in India, though, I was delighted to march and chant and hold up picket signs till my feet, throat, and arms ached. Over the past four years, these exuberant events rippled out from Mumbai and Delhi to all of the medium-sized cities and even to some small towns. By last year, revelers threw aside the masks they’d once worn to shield their identities in favor of rainbow boas and saris festooned with sequins.

At Mumbai Pride this past weekend, the mood was angrier—but more determined. There was keen awareness that the judges, in making their recent decision, had glanced dry-eyed through a petition from parents who passionately argued for full citizenship for their beloved queer children. They’d brushed over the pleas of healthcare organizers who testified that driving people into the closet makes preventive work harder, and subjects street health workers to police harassment. And they had ignored the Government of India, which has refused to defend the law and filed a 77-point argument for overturning it.

Instead, the judges took the side of a handful of fringe religious types, including a TV astrologer and a bushy-bearded guru in orange robes, who claims he can cure my lesbianism with yoga.

Now, night after night, the right-wingers shout out bigotries from the many small boxes that, Hollywood Squares-style, divide our television news-and-debate shows. They stage anti-homosexuality marches, a phenomenon scarcely seen in India since the late 1990s. They plaster our walls with posters calling for the death penalty for homosexuals.

Still, no arrests have been made, and activists are urging people not to panic. The full impact of the court’s action remains to be seen.

There is bad news: On LGBT listservs and Facebook groups, people across the country report new cases of bullying, harassment, and even violence. A general chilling effect is evident; as a diversity consultant in Bangalore (“the Silicon Valley of India”), I’ve seen several corporations press the “pause” button on their LGBT diversity efforts.

There is lukewarm news: Most mainstream religious leaders and politicians have kept quiet, or issued neutral, fence-straddling statements. Unlike in the United States, sexual morality is not a wedge issue between parties, and there is no great political capital to be gained by ranting about it—at least, not yet.

There is some encouraging news: Urban, progressive India is appalled. At a time when India wants to be taken seriously on the world stage, in forums like Davos and the G8 Summit, some Indians fear that such a backward stance is a step in the wrong direction.

Meanwhile among the 72 percent of the country that is rural, and the 69 percent who live on less than $2 per day, not much is likely to change. For eons, same-sex relationships here have taken place covertly and without the benefit of queer community, or even what we would understand as a “gay” identity. “Backwards” India cares more about the rising price of onions and petrol than policing homosexuality.

And finally, there is good news: In the wake of the decision, a fierce new wave of organizing has emerged, including spontaneous protests that unite LGBT people and a younger, more liberal generation of straight Indians. Their slogan, “No Going Back,” is part of a larger, multipronged attack strategy created by dozens of small grassroots groups, established nonprofits, lawyers, and other professionals donating pro-bono services, and a coalition of funders. In gearing up for the struggle ahead, a community that was in danger of becoming complacent is now galvanized to political action.

As a queer American, I was thrilled last July when the U.S. Supreme Court overturned the Defense of Marriage Act, granting full federal rights—including immigration—to gay couples. I’d never been a big backer of the mainstream gay-marriage movement, but I was surprised by the wave of emotion that came over me when I heard the news. It was the warm, unfamiliar sensation of being a full and equal citizen of my own country.

When my parents arrived in America in the 1960s, they had to swear they were not Communists, Nazis, mental patients, prostitutes, polygamists—or homosexuals. Yet now, if I wanted to, I could fulfill the deepest wish of the archetypal Indian-American: to bring home an Indian bride from the motherland.

India has just closed a brief, four-year window in which its LGBT citizens had a similar taste of legal equality. For every setback, though, there is sooner or later a leap forward. Already in this week’s news, for example, a military unit has instituted a new training program to integrate transgender people into its ranks.

Most important, a transformation has taken place in the public dialogue here, as well as within every individual and family who has been through the terrifying, exhilarating process of coming out. However long and bitter the fight going forward in India, it seems unlikely that the genie can be stuffed back into the bottle—or the closet.