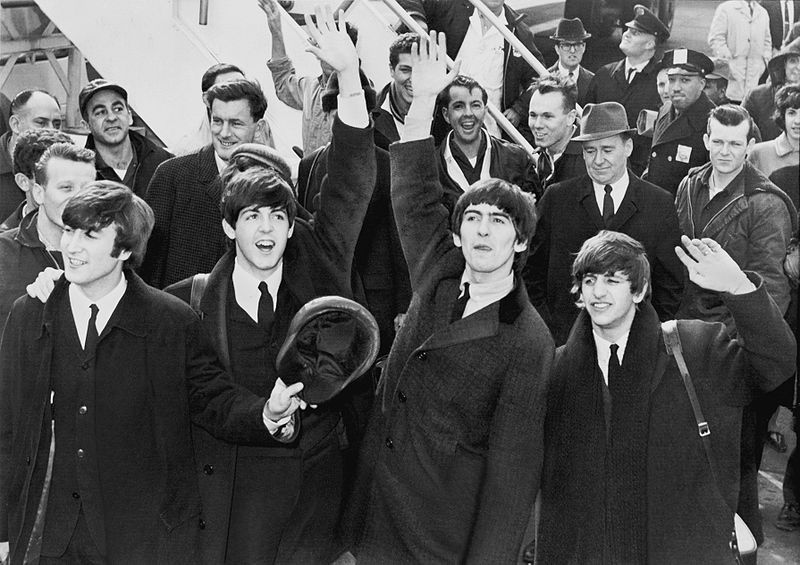 This year brings an unavoidable wave of Beatles tributes, with TV specials, media coverage, a new CD boxed set, and celebrations marking the 50th anniversary of the band’s arrival in America. But amidst yet another look back at the start of American Beatlemania, we’re neglecting (as we often do) an integral part of the group’s appeal and a major reason for their initial popularity: their humor.

The Beatles’ sense of humor was on display at their very first press conference on American soil, at John F. Kennedy International Airport on February 7, 1964.

A reporter asked: “Would you please sing something?”
John: “No, we need money first.”
“What do you think of Beethoven?”
Ringo: “Great, especially his poems.”
“A psychiatrist recently said you’re nothing but a bunch of British Elvis Presleys.”
John: “He must be blind.”
Ringo (shaking like Elvis): “It’s not true. It’s not true.”

Up until then, popular rock artists came across as dull. The Beach Boys, the Four Seasons, and the very polite Elvis lacked humor, insight, and anecdotes. Even the Rolling Stones were uninteresting in interviews—and cagey, too.

So why were the Beatles different—and where did their humor come from? It was a natural coping mechanism of Liverpudlians to relieve the hardships of life in the post-World War II blue-collar seaport. To some extent the humor was a necessary catharsis for John, Paul, and Ringo, who all lost parents when they were young: John and Paul’s mothers died when they were in their teens; John and Ringo’s fathers abandoned their families when they were even younger.

American devotees might have assumed the Fab Four were Three Stooges fans because their hairstyles appeared similar to Moe Howard’s. But their sense of humor was largely shaped by listening to BBC radio. The Goons—Spike Milligan, Peter Sellers, and Harry Secombe—and the absurdist humor of The Goon Show are best described as a 1950s precursor to 1970s Monty Python.

Although the Beatles’ early records demonstrated a high degree of exuberance, they weren’t explicitly comedic. Their films, however, were. The screenwriter of A Hard Day’s Night (which was also released 50 years ago) followed the band around Dublin for a weekend in November 1963. Alun Owen grew up in Liverpool and was familiar with the local vernacular. He drew upon that hometown knowledge, the Beatles’ manner of talking and joking, and their natural chemistry in crafting his script for their first movie. (The film’s recurring “You’re a swine” jab was similar to a Goons catchphrase, “You dirty rotten swine, you!”) Onscreen, the Beatles played attractive and likeable characters—a sharp contrast to other British rockers in bandwagon-jumping movies released the following year. Gerry and the Pacemakers in Ferry Cross the Mersey and the Dave Clark Five in Having a Wild Weekend were disappointingly unappealing and unmemorable.

Beatles manager Brian Epstein polished the band’s rough dress and stage manner and encouraged them to become more professional. But prior to their commercial breakthrough in 1963, humorous quips—especially cutting ones from John Lennon—were part of their live show. In the early years, they also performed comedic songs like the Coasters’ “Three Cool Cats” and the 1910 music hall number “I’m Henry the VIII, I Am” (which became a number-one hit for Herman’s Hermits in 1965).

Their love of humor also literally shaped the band. One of the reasons John Lennon, Paul McCartney, and George Harrison fired drummer Pete Best—whose personality was described by fans as “moody” and “withdrawn”—was that he didn’t share their sense of fun. His replacement, Ringo Starr, was an easy fit.

Beatles fan club members—who were mostly British—received an annual dose of the band’s humor on Christmas records: flexi discs featuring the Beatles singing in funny voices and mangling the lyrics of Christmas standards. Over the years, humor was introduced sparingly on the Beatles’ regular albums: subtle lines like “crawled off to sleep in the bath” in “Norwegian Wood,” smutty ones like “four of fish and finger pies” in “Penny Lane,” and the bizarre, seemingly drug-inspired “You Know My Name (Look Up the Number),” which was originally recorded in 1967 and issued as the B-side of “Let It Be” in 1970.

When the Beatles debuted on The Ed Sullivan Show 50 years ago, “I Want to Hold Your Hand” had topped the American charts for three weeks and sold over a million copies. But the avalanche of reporters at that first airport press conference showed up primarily to skewer the longhaired interlopers. Luckily for the Beatles, their wit won over the American media—and helped ensure that we’d be celebrating them half a century later.