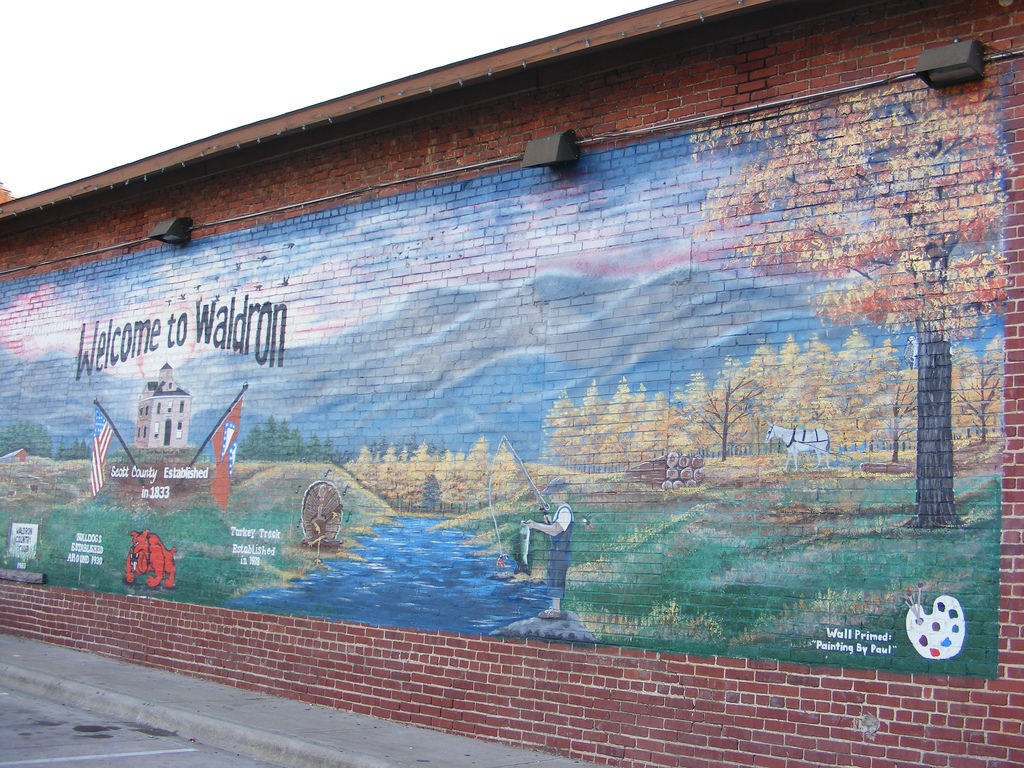 In changing the way America produces meat, big agribusiness has also changed America’s heartland. Former Associated Press reporter Christopher Leonard visits Zócalo to discuss what we should know about the meat on our plates and its consequences for the parts of the country that produce it. Below is an excerpt from his book, The Meat Racket: The Secret Takeover of America’s Food Business.

Nobody ever visits the stranded little community of Waldron, Arkansas. But even if they did, a tourist would never see the place for what it really is. Most outsiders would be fooled into thinking it was an actual small town.

On any given morning, the residents awaken and begin their routines along Main Street. Old men park their pickup trucks by the curb in front of the Rock Café, which opens early for breakfast. As the café’s booths and tables fill up, a congregation of old-timers in cowboy hats gathers in a loose ring of aluminum chairs out front, smoking and talking and stubbing out their cigarette butts in a bucket full of sand. Later in the morning, Chambers Bank on the south end of town opens up and the tellers cheerfully greet customers by name. On Thursday at noon, the livestock auction opens in a cavernous barn on the north side of town, drawing crowds of ranchers who haul steel trailers behind their trucks, with cows staring out between the horizontal slats. In the late afternoon, teenagers park their cars by the gazebo south of the auction barn, proudly displaying their Mustangs and Broncos like big game trophies.

These events have a rhythm of their own, the clockwork functioning of a small-town economy. But it’s just window dressing. All of it could cease to exist in a moment and have no impact whatsoever on the true Waldron, or its true economic reason for being. The real tempo of the town’s economic pulse is measured by the coming and going of semitrucks that roll down Main Street at periodic intervals, 24 hours a day, seven days a week. In the middle of the night tanker trucks full of animal feed rumble past the empty stores and out onto country roads that lead into the hilly terrain that surrounds town. At dawn, other trucks trundle in from the hills, heaped high with battered metal crates full of chickens that exude clouds of white feathers along the highway. The tempo can be measured in the regular arrival of train cars full of grains and oilseeds that dump their loads at a feed mill that clanks and hums and churns all night, and in the parade of refrigerated trucks that pull up to a slaughterhouse near the feed mill and get loaded with pallets of frozen meat. This is the real functioning of Waldron, Arkansas, and its true reason for being. This is the heartbeat of Tyson Foods, the nation’s biggest meat company.

The Tyson plant on the north end of Waldron is the only thing that keeps the town on the map. Appropriately, many residents simply refer to it as “the complex.” That’s because the Tyson plant isn’t just a factory; it’s more like an entire small-town economy consolidated into one property. The complex contains its own feed mill and hatchery, its own trucking line, and a slaughterhouse that covers several acres of land and processes about 1 million dead chickens a week. The complex is like an economic dark star that has drawn into itself all the independent businesses that used to define a small town like Waldron, the kinds of businesses that were once the economic pillars of rural America.

Of course, tourists to Waldron would never see the Tyson plant, and not just because it sits on the northern fringe of town and away from Main Street. Visitors are stopped at its front gate and forbidden from exploring the grounds. So a tourist would have to be content to stroll along the sidewalks downtown, observing the fake Main Street, the deceptive array of little businesses that make it seem like a community.

This illusory appearance cloaks Tyson’s existence all the way from its roots in rural America to the grocery store shelves and restaurant menus where its products finally reach consumers. The average shopper is usually fooled when he or she peruses the meat aisle, seeing what appears to be an abundance of choices and products. The Tyson brand name wouldn’t necessarily stand out, with its logo gracing just a handful of products. But the rotisserie chicken slowly turning in its oven, the Bonici brand pepperoni, the Lady Aster brand chicken cordon bleu, the frozen chicken pot pie, and the Wright Brand bacon all come from the same company: Tyson. And then there is all the unlabeled meat that Tyson floods into the U.S. food system every day: the meat served in cafeterias, nursing homes, fast-food restaurants, and suburban eateries where more and more Americans eat their meals. There is a very good chance any of the meat purchased in these places was made by Tyson. Even if Tyson did not produce a given piece of meat, the consumer is really only picking between different versions of the same commoditized beef, chicken, and pork that is produced through a system Tyson pioneered. Tyson’s few competitors have resorted to imitating the company’s business model just to survive.