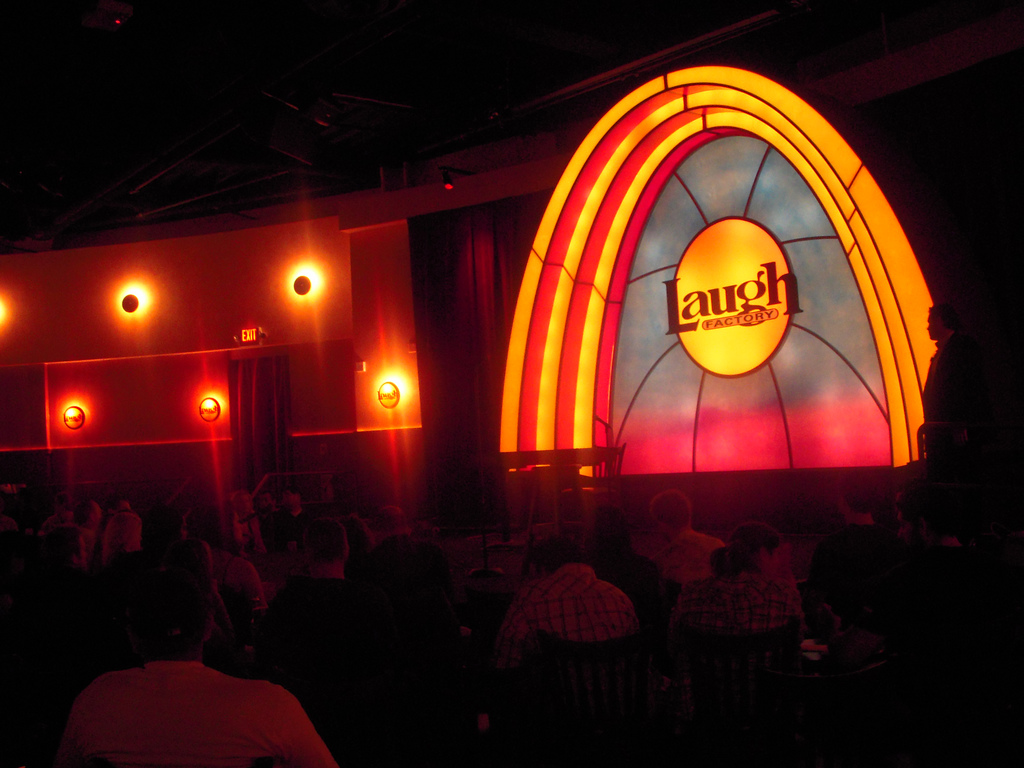 My heart was beating a mile a minute. Perspiration started to form in my armpits. Soon I would smell like the cab driver who’d brought me here. I was one minute into my stand-up act. And all I could hear were the horrible thoughts racing through my mind.

Oh God, they’re not laughing. No one is laughing. Do the next joke. Setup, punch line … nothing. A bead of sweat slowly ran down the side of my face. The next one, do the next one. This always crushes.

Except this time, it didn’t. My jokes were falling flat in front of 80 people, and I still had six minutes to go.

After a year of doing comedy shows at any place in New York City that would have me, I experienced my first true bomb. I’d been performing mostly at open mics and bringers—shows where you have to bring a designated amount of people in order to get stage time. But this was supposed to be my big break: a potential weekly gig at a West Village bar where one of my stand-up buddies worked.

When I’d arrived 20 minutes earlier, the place was packed, but I noticed one thing: There wasn’t a single sign that said there was going to be a live comedy show that night. Then I noticed another thing: no stage. And another: no microphone. And no spotlight. Luckily, my friend had a plan: We were going to do stand-up on a staircase in the corner, with all the houselights up, using the DJ’s microphone—at a bar where no one knew there were going to be people doing stand-up. What could go wrong? (Insert heavy sarcasm.)

When my friend took the mic from the DJ, the bar patrons turned their heads toward him—only to turn away as soon as they heard the words “stand-up comedy.” The guy next to me, not knowing I was a comic, actually said, “Ugh, I don’t wanna see stand-up.” (Fun fact: That was disheartening!) What followed next were the longest seven minutes of my life.

I don’t blame the audience for not listening to me. They’d come to the bar to get some drinks, hang out with friends, and flirt. And then here comes this guy who interrupts their flirting to tell some jokes. I was basically one huge cockblock. I was my mom!

Five years later, I’m extremely thankful for my first real bomb. Like most new comedians, I’d been petrified of it. And when it finally happened, it was a relief: It wasn’t that bad. Don’t get me wrong, bombing feels as bad as it looks, and it certainly did that night. But it also goes with the territory: I’ve seen Dave Chappelle bomb at the Comic Strip Live in New York. I’ve seen Dane Cook bomb at the Laugh Factory on Sunset Boulevard. Comedians are constantly trying new material, and sometimes that material isn’t so good. (And luckily for us, you guys let us know that rather quickly.)

Up until that moment, I’d been pretty happy with how my career was progressing. I’d been getting big laughs fairly frequently, and once in a blue moon I’d even get the beloved applause break—when the audience claps so much at a punch line you have to wait for them to stop before you can move on. But after bombing, I went home and started tweaking my jokes. And I thought a little harder about how to play a room. When you’ve got a rowdy crowd, sometimes the best thing you can do is toss your jokes out the window and try to win everyone over with a little audience work—whether it’s making fun of something an audience member is wearing, or asking someone a question and responding with a smartass answer. This kind of improv makes the audience feel that they’re part of an inside joke—and gets them on your side so you can go back to your jokes.

Stand-up comedy might be the only job where you are set up to fail. It’s one of the only gigs I can think of where you perform in front of people without ever getting to practice first. You can rehearse a joke in the mirror until you memorize its nuances and rhythms, and you may personally think the joke is funny because you wrote it. But you won’t know if it works until you go on stage and perform in front of people. Actors and athletes practice behind closed doors, repeating a scene or a particular play until they can do it perfectly. But with a joke, you take your cues not from your film director or from your teammates but from the audience.

If you’re in the audience at a comedy show, you expect nonstop laughter. But it’s just as likely—especially if you’re at the Laugh Factory, or any other local comedy club, on a weeknight at 9 p.m.—that you’ll see something new, or something in progress. And sometimes it’s not pretty. Testing and tweaking a new joke can take weeks, if not months. When you think about that, that’s freaking crazy! We’re walking on stage in front of a group of people, over and over again, knowing that the jokes we’re about to tell may not work. That we’ll get some awkward stares and silences. Who in their right mind would do that?

We do it because we love to make people laugh. To me, there is no better feeling in the world. Someone in that audience could have had the worst day, then you give that person 15 minutes of joy, and suddenly that crappy day feels pretty decent. I once did a show where everyone in the room had cancer. But they let me make them laugh for 10 minutes. It was one of the most powerful moments of my life. It makes the bombs—and the work that comes after them—worth it.

I’ve been doing stand-up for about six years now in New York City and Los Angeles, where I moved in 2009. I’ve been lucky enough to play some great comedy clubs and colleges all over the country. I still bomb every now and then when I try some new jokes—though never as hard as that first one. But it doesn’t bother me. Don’t feel guilty if you don’t laugh at one of my jokes. It lets me know I have to fix it. Just don’t throw shit at me.