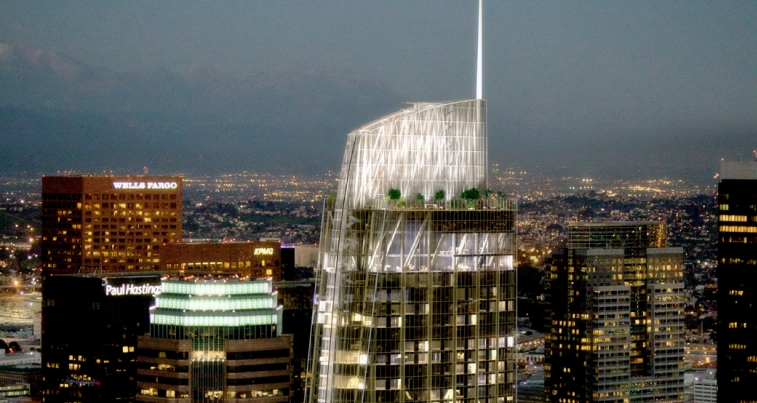 The Hanjin Group of South Korea, better known to Americans through its flagship subsidiary Korean Air Lines, is in the process of building the tallest structure west of the Mississippi. It’s going up right in the heart of downtown Los Angeles—the sort of project bound to stir conversation and controversy.

And yet there’s no controversy and little conversation. No one is screaming that the Koreans are buying up America, or even downtown L.A. No one is complaining about how the Wilshire Grand Hotel has been demolished to make way for a skyscraper. If you read the online comments to the handful of news articles on the project, Angelenos say they welcome the shiny glass and steel New Wilshire Grand, and hope it will further revitalize downtown when it opens in 2017.

This reaction is very different from the alarmism of the 1980s, when the Mitsubishi Estate Company of Tokyo purchased Rockefeller Center in New York City, and Japanese companies invested in firms and properties all over America. What accounts for the difference? One obvious answer is that Japan, unlike Korea, was not an American enemy. The less obvious answer is that Korea, despite its achievements and centuries-old connections to America, has been slow to penetrate the American consciousness.

When I was a child growing up in New York City in the 1980s, the construction of a Korean skyscraper complex would have been inconceivable. Back then, Korea was virtually unknown, except when it was depicted as a poor, primitive, and war-torn country in M*A*S*H, (which, while set in Korea, was actually an allegory for the war in Vietnam). Even the actual Korean War is referred to as “The Forgotten War” or “The Unknown War.”

It wasn’t until quite recently that Korea, and Koreans, entered the American psyche. Throughout the 20th century, Korea existed in Japan’s shadow. In 1905, Korea became a protectorate (effectively a colony) of Japan and ceased to exist legally after it was annexed in 1910. The country was liberated after Japan’s defeat in World War II, divided into north and south, and then ravaged by the Korean War.

After the war, South Korea’s GDP languished in the company of sub-Saharan nations as Japan’s economy skyrocketed. By 1978, Japan had the world’s second largest economy. Japanese culture entered and established a place for itself in the minds of Americans. The 1980s were filled with all things Japanese—from comics (anime and manga) and literature (Haruki Murakami), to audio and entertainment systems (Nakamichi and Nintendo) and music (karaoke). With this onslaught on a myriad of fronts, the American fear of being subsumed by Japan was visceral.

I came of age during this period of Japan’s ascendancy, a time when Koreans were eclipsed by the scorching Japanese sun. As with many Korean-Americans, my family’s presence in America was a consequence of the Immigration and Naturalization Act of 1965, which lifted many previous restrictions on immigration from Asian countries. Seeking to claim their portion of the American Dream, my parents came to New York City with just $1,000; in today’s terms, this is a little over $5,500. Times were tough. My father graduated from the prestigious Yonsei University in Seoul, but in the U.S. he was forced to take odd jobs, from night watchman in a discount department store to working in a pizzeria. I remember hearing stories of Koreans with Ph.D.s who had mental breakdowns because they could only find work in factories alongside high school dropouts.

I also remember being asked, “What kind of ‘ese’ are you? Japanese? Chinese?”

Korean invisibility in America didn’t last, however. Korea’s international profile has grown; the current Secretary-General of the United Nations, Ban Ki-moon, is Korean. Here in the U.S., Korean-Americans are increasingly visible and influential, in the arts (for example, L.A. painter and graffiti artist David Choe) and in education and development (Jim Yong Kim, the former president of Dartmouth College, was appointed president of the World Bank in 2012). Korean cuisine is spreading beyond urban enclaves to the rest of America through the popularity of Korean barbecue. In music and entertainment, 2012 was a watershed year for the international phenomenon known as K-pop (Korean popular music) with the American debut of multi-platinum group Girls’ Generation. And only those who live under rocks were unaware of the sardonic lyrics and equine gyrations of Psy’s “Gangnam Style.”

Downtown L.A.’s coming 73-story New Wilshire Grand is of a piece with this cultural arrival. It will house a luxury hotel, restaurants, retail—and a rooftop pool. Right now, it is a hole in the ground—a hole with a new foundation after last week’s concrete pour. When it is completed (2017, says the schedule), it will rise to claim the title of tallest structure in the West. In one sense, the building has been in the making for generations. For this immigrant son, it is a testament to how much has changed in my beloved city of L.A., and country. It is a point of recognition and pride. Even if you don’t hear all that much conversation about it.