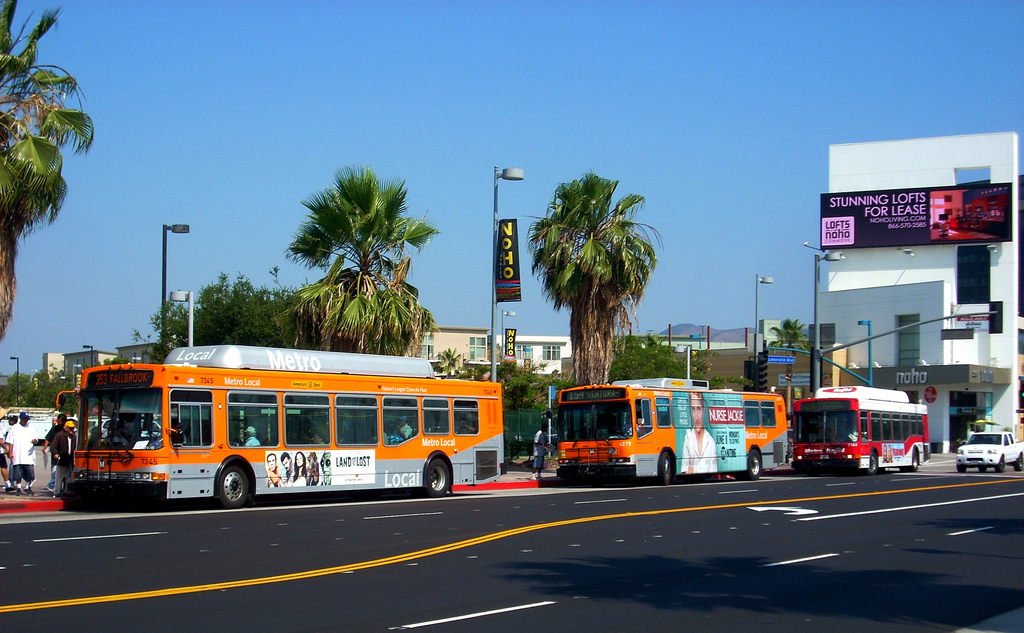 There are over 6 million drivers in the county of Los Angeles, but I’m not one of them. Since 1998, when my family moved here from the Philippines, we have relied on Metro, L.A.’s major public transportation system, to get around. For 13 years, my aunt left our East Hollywood apartment at 5:30 a.m. and arrived home at 6 p.m. every day, taking two buses to and from her workplace in El Monte, 18 miles away. Growing up, I walked with my mother to and from Lockwood Elementary School less than 10 minutes from home.

Once a week, my mom and I would take the bus together down Vermont Avenue to Seafood Market and Goldilocks Bakery in Koreatown, a 30-minute trip, including wait time. My mom would only buy as much as we could comfortably lift. I would carry a brown bag full of pandesal, Filipino bread rolls, and she would hold double plastic-bagged groceries with both hands. I loved pandesal but hated the long wait at the bus stop and the bumpy journey on the road. Whenever I felt queasy on the bus, my mom would pull a plastic bag out of her pocket, widen it in front of my mouth, and pat my back. Once, on the way home after visiting the doctor, a female bus driver ordered my mom to take the lollipop out from my mouth: “Or else she’s gonna choke herself from it!” My mom told the driver she had no right to tell her what to do. We hopped off the bus before the next stop, but we still had long stretches of pavement to walk before reaching home.

In sixth grade, I became comfortable taking the bus on my own after school and on weekends. I passed the time waiting at bus stops and riding listening to Linkin Park on my CD player. The abrupt, jerky bus motions kept me from reading and sometimes still made me feel sick. But I could prevent a headache by tuning out the stops and starts and gazing at storefronts, license plates, pedestrians, and street activity through the windows. I enjoyed observing Los Angeles in its different faces, like cities within the city, from MacArthur Park to Park La Brea, Downtown L.A. to West L.A. I was able to travel as far west as Santa Monica and as far south as Long Beach on public transportation for $1.25. I could catch any one of the dozen buses heading every cardinal direction away from my busy home-base intersection of Vermont Avenue and Santa Monica Boulevard. I learned by heart the cadence of passing streets as I rode the buses plying Vermont: Sunset, Fountain, Santa Monica, Melrose, Beverly, First, Third, Sixth, Wilshire. I created my own map of L.A. by surveying who got on and off the bus at which stops. While I heard mostly Spanish and Armenian spoken around East Hollywood, I would hear mostly Korean, Chinese, or Tagalog when passing neighboring areas heading south and west from home.

When I started high school at John Marshall High in Los Feliz, I rode the bus home every school day—a 30-minute wait at the bus stop plus 15 minutes on the bus. (In the mornings, I typically walked 40 minutes to Marshall because the buses weren’t always on time, and I didn’t want to be late for the bell. A ride by car would’ve taken five minutes.) I began purchasing monthly student passes in ninth grade. A day or two before the end of the month, I would stand in a long line at a cash-checking kiosk to sign up for the $24 pass reserved for full-time students. Student passes were in high demand, so Metro ran out of them within a couple days of the first of the month. When I missed getting a pass, the bill for riding the bus that month added up to about $50 just for the weekdays.

The bus was a cheap form of independence, but I was paying fare for an unpredictable experience. Even when plugged into my music, it was impossible not to overhear conversations. I once listened to a young lady directly behind me on her cellphone tell the story of her life growing up in foster homes, express her undying love for Jesus Christ, and invite the man on the line to an upcoming Bible study session. I also learned to be careful about verbal and physical harassment. I knew to check to see who I would be next to before I sat in any seat. I was cautious about wearing revealing or tight-fitting clothing because it made me feel vulnerable.

The bus has a code of behavior all its own. It’s rare to witness strangers engaging in conversation, even when people stand face-to-face in a crowded aisle. But from time to time, I see someone gesture, or communicate with a tap on the back, in order to offer a seat to an elderly person or someone with lots of grocery bags. While it’s acceptable to talk on cellphones, it’s somehow not acceptable to sing aloud.
It’s common to listen to music, but I rarely see anyone open up a MacBook on the bus. It seems a little like showing off when most riders don’t have such luxuries, plus there’s not a lot of privacy. And, at least when I was younger, people didn’t want to expose valuables on the bus—my brother had his iPhone stolen and pockets picked.

Most phones today come with applications that accurately map out bus routes and provide arrival and departure times. I spend less time waiting at bus stops, and I no longer have to walk long distances instead of guessing when the next bus will show up. I don’t have to visit the Metro website before leaving home to draw maps on paper. And as much as I enjoyed gazing out the bus windows, I prefer the way technology has integrated my riding experience with my work and personal life because I use the time to browse the Internet, send and receive e-mails, or read the news. The streets of L.A. seem more congested than they did 10 years ago, but the expansion of the Metro Rapid buses (which provide faster and more frequent service on major roads) and the more extensive subway system have made Metro more reliable. Rides are shorter now than when I was a kid.

My commute to work in Santa Monica from Mid-City, where I live now, is an hour long, and my commute back home can take more than two hours due to traffic. Taking the bus as an adult, I’ve learned to wear walking shoes and pack my purse with my dress shoes.

I walk to the supermarket during the work week, but on weekends I take the bus to go shopping in Koreatown, just like I did with my mom as a kid. And while most of my friends now have cars, I still base our meeting spots on bus routes to make things convenient, and so I don’t have to rely on them entirely for rides. We’ll meet at a subway stop that’s busy—say, Pershing Square—so it’s relatively safe to be waiting at, especially in the late evening. Then we’ll walk together to the Downtown L.A. Art Walk or a restaurant.

Growing up riding the bus has made me appreciate the city for its asphalt, its streetlights, its drivers, its pedestrians, and all its changing shapes and forms. I don’t think I stress any less about being on time than people who drive, and L.A. traffic affects me as much as it does L.A. drivers. But riding the bus has made me attuned to the city at a different pace. It’s also given me insight into the day-to-day struggles of people in my city. I’ve seen young men in suits leaving work in the evening sitting down next to red-eyed construction workers just heading out to their jobs. I’ve seen so many 17-year-old mothers guiding one or two children through the bus doors on their own. I once stood beside a short, tanned man who only made eye contact as we were both being squeezed by the doors that opened inward. He gestured to give me more space even though it limited his. As he told me in Spanish about his work in the fields and how he couldn’t speak English, I thought about how I probably wouldn’t have met him any other way.

These people are all a part of my Los Angeles, and, as they get off at their particular intersections, I get telling glimpses of the different paths Angelenos end up traveling. That seat on the bus is the best place in L.A. for tapping into the heartbeat of the city.