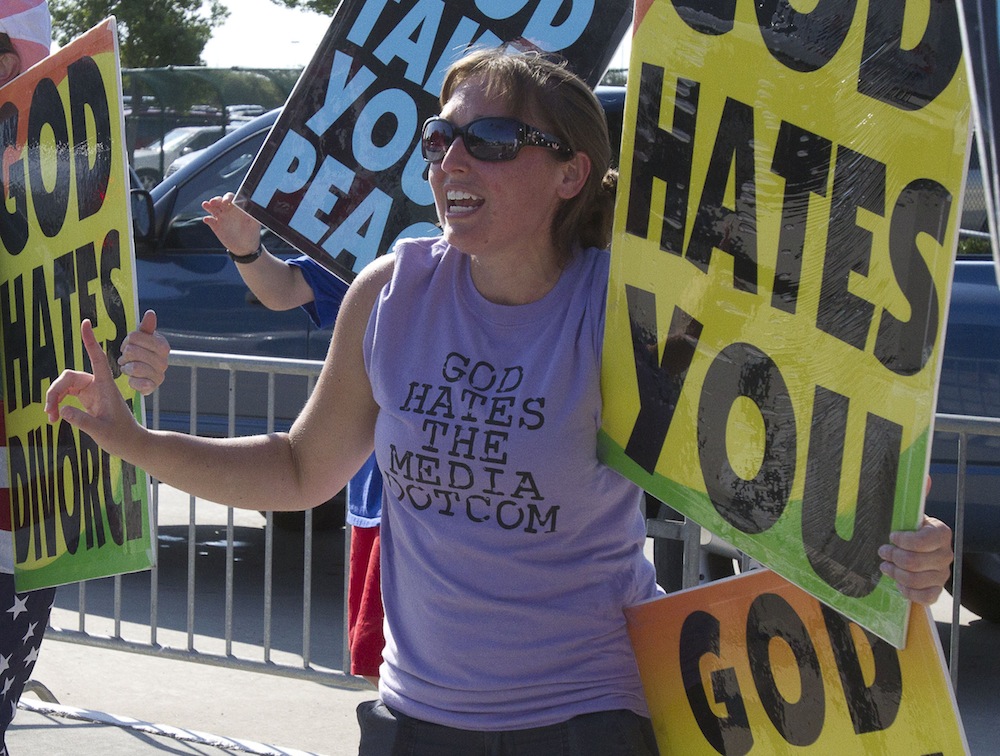 It has been written that the safeguards of liberty have often been forged in controversies involving not very nice people. If that is true—and the facts support the premise—then the actions of Fred Phelps and the church he led went a long way in forging liberty.

Fred Phelps died on March 19. Few tears were shed. Obituaries labeled him a preacher of hate. Reverend Phelps led the Westboro Baptist Church, a group known for its virulent opposition to homosexuality and for picketing a variety of events, including the funerals of military personnel, whom they believe God kills to punish a nation that tolerates homosexuality. From a library of placards, several with hurtful language are chosen for each picket: “God Hates Fags” (also the name of Westboro’s Web site), “God Hates You,” and “Thank God For Dead Soldiers,” for example. The picketers march, sing popular melodies with their own lyrics, and take on those who oppose them.

I first learned of Fred and Westboro when the U.S. Supreme Court agreed to hear the case of Snyder v. Phelps. Al Snyder is the father of a U.S. Marine killed in Iraq. Fred was one of seven Westboro members who protested the Snyder funeral. As with all of their pickets, Westboro had carefully planned this one, obtaining the necessary permits and obeying local laws. They were 1,000 feet from the church and ended the picket before the service began. Though he never saw them, Al sued for invasion of privacy and intentional infliction of emotional distress. He won at trial but lost an appeal. The Supreme Court would settle this First Amendment issue.

As a professor, researcher, and writer in the First Amendment field, I wanted to know the story behind the case. It was not only a major test of this nation’s tolerance for free speech; it would also be an emotional one. It was good vs. evil, integrity and honor vs. disgrace and vile, the venerated military vs. those who dare to oppose it. I wanted to arrange for a trip to the Phelps family home in Topeka, Kansas. The goal was to observe and interview.

I recall making my first contact with Westboro—a telephone call—in 2010 and doing so with some trepidation. Who are these people? Will they tell me to drop dead? Do they shun any kind of contact with the outside world? No. Shirley Phelps-Roper, one of Fred’s 13 children and a spokesperson for the church, welcomed my call and helped by scheduling interviews across several days. (The interviews—both during the trip and afterward by telephone—ultimately totaled dozens of hours.) In effect, Fred’s family is his church. Almost all of the church’s 70 or so members are his descendants or their spouses.

Shirley was extremely kind throughout the process and beyond. Of course, one reason behind the hospitality was Westboro’s desire for publicity, which its members readily acknowledge. Their mission is to convey the word of God (as they define it). The more eyes, ears, cameras, and microphones the better. I later learned that Westboro members viewed me as an angel sent by God, a facilitator of spreading the word.

My observations began on a Sunday, attending the weekly noon church service. Shirley welcomed me into her home, one of several in a neighborhood where many Westboro members reside, forming a sort of compound. We walked across the backyard—a fenceless area that creates open territory shared with other Phelps families—and into the church. Fred presided, speaking in an accent reflective of his Mississippi roots. The service did not seem out of the ordinary, though I must confess I couldn’t hear all of the words from the 80-year-old preacher from where I sat in the back. Fred read from a prepared script, employing Biblical passages, to illustrate the theme of comfort. There was no fire and brimstone that day and no mention of any of the groups that attract Westboro’s wrath outside the church. But there were visual images. Two of the protest placards stood on easels at the front of the church: “God Hates Fags” and “God Hates Fag Enablers.” Several attendees wore T-shirts with either anti-gay or anti-Jewish messages.

After the service, I was introduced to Fred. Though friendly, he cut an imposing figure at about 6-foot-3. During some small talk, he told me that Walter Cronkite stood for gay rights. The comment came somewhat out of left field, except for the fact that I’m on the faculty at the Walter Cronkite School of Journalism and Mass Communication at Arizona State University. In a courteous tone, Fred was apparently reminding me that, in his view, I was part of a pro-gay rights workplace—one of those “fag enablers.” A news article about Cronkite’s gay rights views also appeared pinned to a bulletin board behind Fred when I interviewed him in his office upstairs from the church a few days later. Something told me that had appeared just for the occasion.

Even though the years were catching up to him, Fred Phelps was very bright. We tend to conclude that people who regularly commit vile, insensitive, and offensive acts lack common sense and basic intelligence. On the contrary, he and his family are highly educated and very intelligent. Though he no longer practiced, Fred had been a lawyer. He was inspired to become an attorney by the landmark Brown v. Board of Education school desegregation case that originated not far from his home. After schools across the country and especially in Kansas dragged their feet in integrating, Fred represented many whose rights were being denied. He was honored by many organizations, including the NAACP.

So how did he end up on a path that has created so much anguish for the people he and other Westboro members picket? First, there is what I describe as a warped view of Christianity, with religious passion and zealotry, run amok. Westboro was first established in 1955 as a “mainstream” Christian church, but its approach began a downward spiral when Fred reportedly witnessed his then-5-year-old grandson being lured by what he says was a homosexual at a Topeka park. After complaints produced no action, the Phelpses put up signs warning of homosexual activity. Protests followed, locally at first, then nationally.

Second, Fred kept his family/church together by ruling with an iron fist. He became estranged from some of his children, including his son Nate, who has said that physical and psychological abuse were not uncommon. When I asked Fred about this, there was no denial. In a house of 13 children, he said, “you have to have some rules, you have to enforce the rules and sometimes, in an extreme case, you have to spank a child. The Bible says to do that, and the Bible says if you don’t spank him when he needs it, you don’t love him, you hate him. The Bible says that.” The “spankings,” Nate told me, involved beatings with a garden tool. The iron fist rule also meant a “my way or the highway” approach that results in lifetime banishment from the church and family for any non-believers.

As the court date for Snyder v. Phelps approached, I wondered how the Westboro legal arguments would play out. The U.S. Supreme Court is an intense experience that tests even the most veteran of lawyers. Fred’s daughter Marge was going to represent her father and the church at the Supreme Court, and many of her siblings have also chosen this profession. I couldn’t help but wonder if so many of his children became lawyers to deal with anticipated lawsuits. No, I was told, it was simply to help him with his civil rights caseload years ago.

The day before her Supreme Court appearance, Marge and several of her family members had some “business commitments” – picketing at three Washington-area sites. In front of the White House, they were two-dozen strong. Fred did not make this trip, but Marge was there in full picketing regalia – a ball cap, sweats, an upside-down U.S. flag and placards in hand. It was less than 20 hours from her Supreme Court appearance. During a break from the picketing, we talked about her presentation the next day. She was quietly confident.

In court the next day, now in a business suit, Marge argued that Al Snyder, the father of the fallen Marine, should not be awarded damages for the infliction of emotional distress, largely because Westboro’s speech was on matters of public concern—homosexuality, the conduct of the military, gays in the military. Marge was virtually flawless, in contrast to her adversary, who stumbled and bumbled his way through his presentation and fielding questions.

Marge’s only error was the prediction she made afterward: “9-to-0!” When the ruling was issued in March 2011, the Court ruled 8-to-1 in Fred’s favor. The Court basically accepted Marge’s argument. In his opinion for the Court, Chief Justice John Roberts emphasized that the United States does not punish speech that causes pain, though it might be distasteful: “As a Nation, we have chosen a different course—to protect even hurtful speech on public issues to ensure that we do not stifle public debate.”

Though many observers may have difficulty distinguishing between Phelps’ actions and his right to freedom of speech, even hurtful speech can make a positive contribution to the kind of debate that is essential in a self-governing democracy. As pornographer Larry Flynt—also a winner at the U.S. Supreme Court in a case involving offensive speech—once said: If the First Amendment can protect someone like him, it protects all of us. Phelps was an accidental First Amendment champion who ended up strengthening the safeguards of liberty.