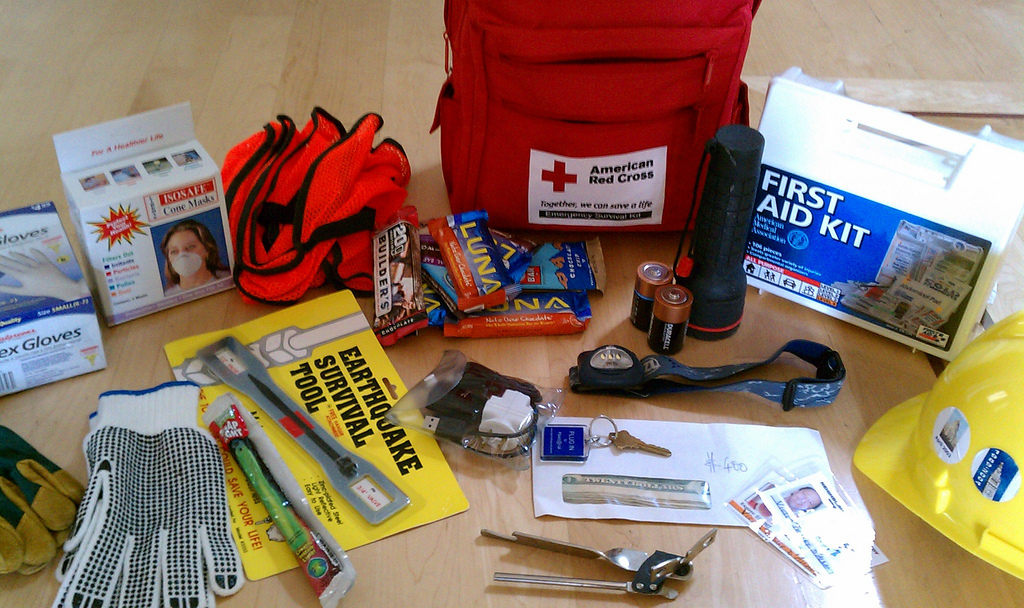 As a native Californian, I’ve always accepted earthquakes as part of life here. So I didn’t use to think about them too much. When the Northridge earthquake hit in 1994, my family didn’t even have an earthquake supply kit.

That’s the thing about earthquake preparation: If you’re not a worrier, there are always more important things to do than gather earthquake supplies—like go to work or walk the dog. And being prepared requires answering a paralyzingly large number of questions about what your plan should be, what kind of supplies you need, and where you store them.

I didn’t get serious about those questions until about four years ago. After doing some reading on earthquakes, I realized that the “big one”—an 8.0 magnitude or bigger earthquake on the San Andreas Fault—is inevitable, and my family should be ready.

My job also played a part. Through my work producing exhibitions for natural history museums, I’ve learned to appreciate the power of elemental forces of nature. When you’re an urban dweller, it’s easy to think about nature as being “out there.” After all, the streets are paved and water always comes out of the tap. But the impact of a serious natural disaster (like a catastrophic earthquake) could be magnified in a densely populated city like L.A.

In 2006, my wife and I moved from Beverly Hills to Hancock Park and bought a four-unit building with our friends. We each moved into an apartment: my wife and I, another couple, and two single people. One evening about three years later, I organized a meeting on earthquake preparedness. The six of us gathered in the building’s garden with a bottle of wine and came up with a plan. Our first step was to agree to split the cost of having the building foundation bolted and reinforced to withstand earthquakes.

Then we started gathering supplies. Based on what I read online, it seems likely that water service will be disrupted after a severe earthquake. So we bought two 40-gallon water barrels that we keep in a storage area in the back of the yard. We also keep five-gallon jugs of water in each of our apartments and garages.

We decided to store most of our supplies in the detached garages behind the building, which are single-story, lightweight but well-braced structures. We labeled containers “earthquake supplies” and put in everything we thought we might need, including an espresso pot and the right kind of coffee. I must confess that the espresso pot was one of the first things we put in the kit.

The containers also have canned food, a first-aid kit, a stove and fuel, a bucket privy, a hand-cranked radio, and tools (crowbar, fire axe, and shovel) for clearing debris. The building’s gas meters already had automatic shut-off valves (which prevent gas leaks and fires after a quake), but we added a valve wrench next to the meters in case they need to be manually shut off. I also purchased several fire extinguishers that we keep near the garage doors.

It took us several months to get the kit together. And we improve the kit each year. My neighbor even found a fold-up solar panel charger online; if we lose power after a quake, we’ll be able to charge our cell phones and computers.

I encouraged my neighbors to keep a backpack in the garage with a change of clothes, money in small bills, and extra medicine (if needed). I’m careful to keep the gas tank of my car fairly full, so we can get around if gas stations aren’t working. My wife and I also keep water and good walking shoes in our cars, so we can make it home if we end up stuck on streets that are impassable.

When we first moved to Hancock Park, I noticed that many people on our block were Orthodox Jews who mostly interacted with other members of their community. Initially, I wanted to organize the block, but it seemed too hard to make connections, so I focused on my own building. But in the last few years, the neighborhood has become more diverse. Slowly, this mix of Orthodox Jews, gay couples, and yuppies have gotten to know each other. My neighbors are friendlier and more open than they were even a few years ago.

I believe in neighborhood fabric and see earthquake preparedness as a way to get people talking to each other. Whether or not we live in separate worlds, I’m confident that my neighbors will come together and cooperate if disaster strikes. People would go house to house to check to see if anyone was hurt or needed immediate help.

My plan now is to distribute literature on earthquake preparedness around the neighborhood—pamphlets, supply lists, and other guidance. We can tell our neighbors, who mostly live in four-unit buildings like ours, how cost-efficient it is to cooperate on earthquake preparations, and invite them to come over to our place and see what we did.

Last week, when the 4.4 magnitude earthquake hit, I braced for a big aftershock. It didn’t happen. And—though I didn’t think about it or discuss it with my wife—I had a sense of calm. It’s reassuring to know we have what we need to make it through a major disaster. If the big one happens and we lose power, my neighbors and I can still drink espresso and charge our phones.