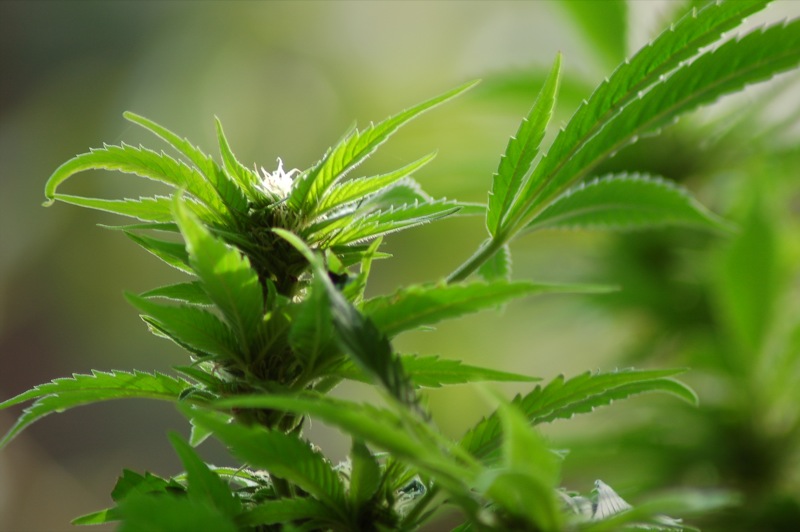 My 19-year-old sister is adorable. She’s fiercely independent, a little moody, and obsessed with movies. She’s also the reason my mother joined forces with other Utah moms to form a powerful “mommy lobby.” Since late last year, these moms—many of them, like my mother, who had never before been active in politics—have sent letters to their representatives, gathered support from friends and colleagues, and even testified on Capitol Hill. Amelia, you see, has Dravet syndrome, a severe form of epilepsy, and our conservative Mormon family has found hope in the most unlikely of places—cannabis.

Thanks in part to the mommy lobby, the Utah State Legislature recently passed a bill to legalize the administration of Alepsia, a cannabis extract taken as oral droplets. Advocates celebrated earlier this week as Utah Governor Gary Herbert held a ceremonial public signing of the bill, ensuring the law will go into effect July 1. Alepsia contains ultra-low amounts (less than 0.3 percent) of tetrahydrocannabinol (THC), the psychoactive element in marijuana, but high amounts of cannabidiol (CBD), a chemical that has demonstrated potential for significant seizure control.

Amelia experienced her first seizure when she was only 4 months old. One day, as my mother was holding her, Amelia’s leg and arm on one side began jerking mildly. By age 1, she was experiencing hundreds of little seizures—myoclonic jerks lasting just a few seconds—each day. The seizures would cause her to fall on her bottom. Undeterred, she just got right back up, over and over again. We playfully started calling them her little booms. “Ah, boom”—there she goes again. I was 9 years old, and the only thing I could do for Amelia was construct a stuffed animal fort to cushion her falls. As we grew up, my younger brother and I became trained in caring for her more seriously, and our three youngest siblings pitched in where they could. Abby, the youngest, for instance, would sit next to Amelia and stroke her hair while she seized.

Amelia’s neurologist reassured us that kids often outgrow seizures, but it became clear early on that my sister was experiencing developmental delays. At age 2, Amelia had a full-body convulsion that lasted for 45 minutes. Realizing she wasn’t going to stop convulsing on her own, my parents rushed her to the hospital. A massive dose of Ativan stopped the seizure but sent her spiraling into respiratory arrest. With a respiratory therapist squeezing a bag, pumping oxygen into her lifeless lungs, my parents stood by, helpless. After 20 minutes, my terrified mother braved a question: “Do you ever get … tired?” He paused for a moment. “Yeah. Sometimes.” It was the wrong answer.

Treatments went nowhere. Amelia tried basically every FDA-approved anti-convulsive medication, and even surgery, with little success and often experienced major side effects. One drug did not let her sweat, causing her to overheat severely. Another triggered a life-threatening allergic reaction that required a 12-day hospital stay.

The only treatment that had any noticeable effect on her seizure control was a high-fat, high-protein regimen called the ketogenic diet. Amelia’s daily seizures fell from the hundreds to just a few dozen. But she stopped eating. After other medications failed, my parents eventually decided to give the diet another shot. Truth be told, I found this annoying. All the careful measuring and weighing that made the diet work sometimes made dinner late. Worse, to make Amelia feel like we were all in this together, my mom adapted her dishes for the whole family—which meant I had to eat quiche. Luckily for me (at least I selfishly thought back then), the diet did nothing for her seizures this time around, and I could go back to eating things like burgers and pizza.

Amelia’s seizures have evolved; she seldom convulses for more than a few minutes at a time now. But her developmental delays have become increasingly pronounced, and she has fleeting myoclonic jerks hundreds, even thousands of times a day. Soon those ubiquitous seizures garnered their own pet names: Little seizures became “blinkies,” and full-body ones were dubbed “big ones.” But what’s more difficult sometimes for my parents and me is her zombie-like post-convulsive state, in which, exhausted, she sleeps, drools, and then stares off into nothingness for an hour or two. In other words, she gets “zoney.” I once forgot the real names, telling a stranger that Amelia had “a bad spell in which she had several ‘big ones’ in a row and then was basically ‘zoney’ for two days.”

My parents have struggled mightily to fend off discouragement, mostly by engaging the enemy that is this disorder. My mother, who had planned on giving up her previous work to care for her young family, soon found herself mobilizing full-time on Amelia’s behalf. Exasperated by the lack of answers from doctors, she checked out every medical textbook on epilepsy in our local university library to become an expert on neurology. She diagnosed Amelia with Dravet syndrome three years before a real neurologist confirmed the diagnosis. My father supported her activism, using his vacation days to hold down the fort when she traveled to conferences a few times a year. After working with the Epilepsy Association of Utah for four years, my mom helped found a national nonprofit support group for other families like ours, Dravet.org.

But most of her time today, as it has been for the past 19 years, is spent taking care of Amelia’s needs—from administering rectal Valium (an emergency drug Amelia takes three times a day) and making sure she doesn’t fall too hard when she’s seizing (which has happened a number of times) to bathing and dressing her each day. Amelia will live under the care of parents or siblings for the rest of her life—we just have very little idea how long that might be. As the oldest sibling, I had to bring up the real possibility of eventually needing to care for Amelia before I could propose to my (now) wife.

It’s surreal how routine seizures have become for us after all these years. When Amelia has a convulsion in the tub now, instead of panicking, my mom just keeps bathing her. But if ubiquitous seizures have somewhat desensitized us, they have also opened our eyes to a different world. When a family from out of town with a child with disabilities sat in the pew behind us at church, the mother was touched when my brother and I actually talked to her son. My first job in college was working with adults with disabilities.

Occasionally Amelia has good days, too. She smiles and teases, and we catch fleeting glimpses of her radiant personality, of what might have been. She once appointed herself the language police of the household. “We don’t say ‘stupid’s or ‘shut up’s,” she would chastise her older brothers. She loves spinning, twirling, and being tossed upside down, so naturally, theme parks are her heaven. After so many seizure-related injuries, she rarely feels pain and has no fear. She thinks roller coasters are hysterical—and everyone loves sitting by her because she laughs the whole time.

Cannabis isn’t a substance my family—under just about any circumstances—would have an interest in legalizing, but what we call normal keeps changing. Alepsia has emerged as a source of legitimate hope for Amelia. Currently, 80 percent of children being treated with Alepsia in Colorado have experienced at least a 50 percent decline in seizures. Although still preliminary, those results vastly outstrip all the FDA-approved medications Amelia has tried. Other states are taking action, and that’s a good thing. While Alepsia won’t “save” Amelia, it might mean more days smiling and laughing, and fewer sitting on the couch drooling. And it might mean a new routine for my family—which would be more than enough, for us.