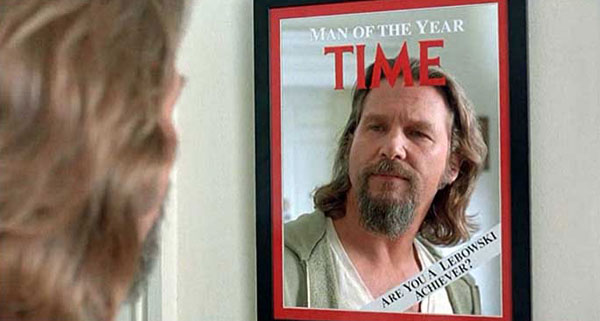 Are we becoming a state of Lebowskis?

Jeffrey Lebowski, better known as the Dude, is arguably the most successful fictional Californian of the past two decades. Created by the Coen brothers in their 1998 film The Big Lebowski, and embodied by the actor Jeff Bridges, Lebowski became a cult favorite for being an outsider (in his own words, not a member “of the square community”). He was a stoner who drank White Russians, wore a bathrobe to the grocery store, bowled, tangled with pornographers and German nihilists, was indifferent to work, and retired the trophy for most laid-back Angeleno ever.

But times have changed since the movie was made (and since 1991, when it was set). And so has California. This weekend, Bridges and his country-rock band, The Abiders, headline Lebowski Fest Los Angeles at the Wiltern Theater. Tickets, priced at $40, are sold out, though as of this writing $25 tickets for the Lebowski Fest bowling party in Fountain Valley are still available.

Yes, Dude, there are signs that you are no longer the outsider. Indeed, no movie character better represents the 2014 California mainstream than Jeffrey Lebowski.

Let’s start with Lebowski the stoner. Since the film, medical marijuana has become so commonplace in California that I used to pass four dispensaries while taking my baby for a walk in our old Los Angeles neighborhood. Last year, for the first time, a majority of Californians supported legalization in a Field Poll. Governor Jerry Brown recently warned against this creeping Lebowskization on national TV: “How many people can get stoned and still have a great state or a great nation?”

Perhaps an unfair question, but it is true that in matters of economics, we are all Lebowski now.

The Dude used to stand out because he didn’t hold a steady job. Today, that makes him an avatar of L.A. As Judy D. Olian and Edward F. Leamer of UCLA pointed out in the Los Angeles Register, Los Angeles has lost more than 3 percent of its payroll jobs since 1990, ranking dead last among American cities. And since 2000, San Jose has lost 3 percent of its job base; booming San Francisco has gained just 1.5 percent.

The work Lebowski did—apathetic detective stuff involving the location of a young woman named Bunny—was purely freelance. Today, Southern California is the national capital of self-employment, according to data from Atlantic Cities; the Bay Area is full of freelancers, and Sacramento has more than its fair share. The number of Americans working from home, as the Dude did, increased by more than 4 million from 1997 to 2010, with Western states leading the way.

The Dude’s consistently slovenly attire, even in professional situations, was ahead of its time. As someone who is writing this in his office while dressed in a T-shirt and shorts, I’m appreciative. And the Dude was forward-thinking environmentally: He devoted himself to carpooling, riding with his friend Walter Sobchak (played by John Goodman) even though it meant tolerating the Vietnam veteran’s rages.

Lebowski’s cultural passions have been widely embraced. The Dude enjoyed imbibing heavily, and Americans have followed suit; adult binge-drinking rates have increased significantly since 1997, according to Centers for Disease Control and Prevention figures. Bowling, the Dude’s great passion, has rebounded in recent years, though growth in casual, recreational bowlers masks a decline in devoted league members like Lebowski. And while few Californians do battle with German nihilists like Lebowski did, it should be noted that the number of UC Berkeley undergraduates majoring in philosophy increased 74 percent in the last decade.

Lebowski remains out of step from today’s California only in his dislike of the Eagles; their recent run of sold-out shows at the Forum in Inglewood demonstrates that they are more popular than ever.

Some of these statistics may surprise. California’s image of itself is of a young and diverse place. But in fact, for all our diverse heritage, we are rapidly becoming, like Lebowski, middle-aged and thick around the middle.

Let’s not forget that the state has plenty of people like the film’s “other Lebowski”—an elderly plutocrat, also named Jeffrey Lebowski (confusion over the two Lebowskis drives the plot). This Lebowski pretends to be wealthy and philanthropic, but we learn during the course of the movie that he is actually house-rich and cash-poor. Presumably he would have to sell the place, if it weren’t for Proposition 13’s limits keeping his property taxes so ludicrously low.

It will be interesting to see how long the Lebowski phenomenon persists. As the film’s narrator puts it, “Sometimes, there’s a man, well, he’s the man for his time and place. He fits right in there. And that’s the Dude, in Los Angeles.”

And in California. The cult has become cliché.