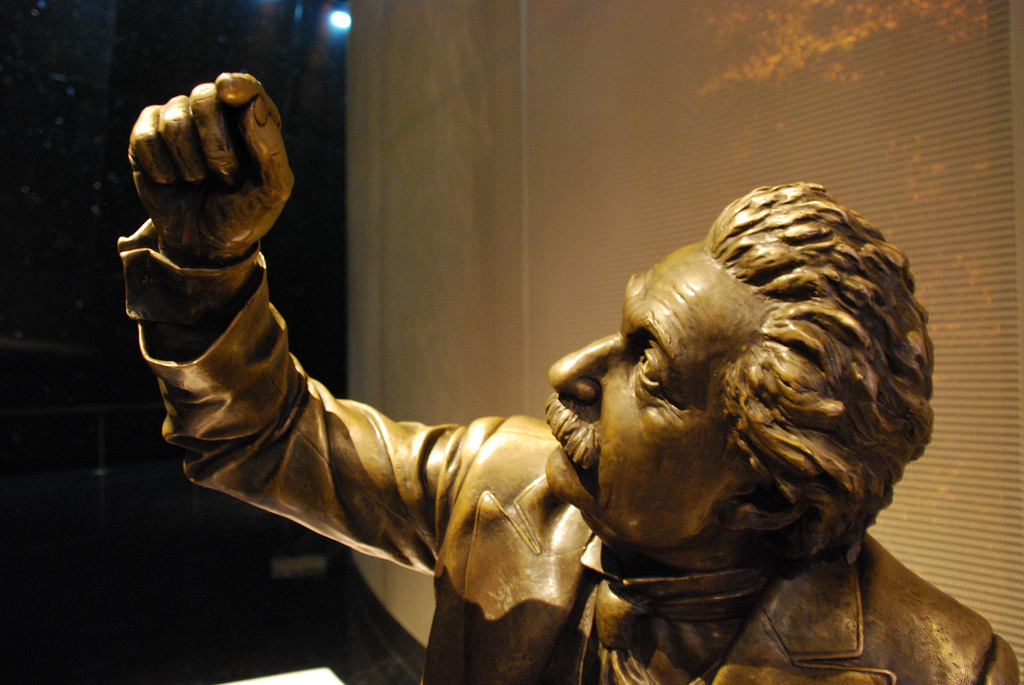 When Albert and Elsa Einstein first visited in January 1931, the Jews of Los Angeles were besotted.

A hundred women and men, representatives of almost every Jewish organization in the city, gathered hastily to plan an event to honor of the couple. They rented the most lavish room in town: the Fiesta Room of the Ambassador Hotel where, three months earlier, Hollywood’s finest had gathered for the third annual Academy Awards. There, the Jews of L.A. would stage the “the most important event” in their community’s history, a “monster banquet” (as their press release boasted) honoring a personage the L.A. Times called “the man Jews generally regard as the greatest member of their race.”

Jews of all sorts came out for the February 16 gala: Orthodox, Conservative, and Reform; Ashkenazim and Sefaradim; native-born and greenhorn; Zionist and non-; intellectuals and businessfolk. Rabbi Shlomo Neches, the immigrant traditionalist from the Breed Street Shul, offered “grace,” while Rabbi Edgar Magnin, the tony doyen of the Wilshire Boulevard Temple, introduced the great physicist. In between, Los Angeles Mayor John Clinton Porter welcomed the crowd.

Albert Einstein spent three winter terms at Caltech, in 1931, 1932, and 1933, and his visits with his wife were a unifying event for a Jewish community divided by background, language, class, and sorts of observance. Everyone, it seemed, admired the physicist. The leaders of La Communidad Sephardi invited him to speak at the dedication of their grand Tifferet Israel synagogue in the West Adams neighborhood of South L.A. Samuel Untermyer, the best-paid lawyer in New York and one of America’s most renowned Jews (“A millionaire many times over [and] a defender of the poor and oppressed,” as H. L. Mencken’s American Mercury magazine described him), hosted the Einsteins at his new hotel in Palm Springs. Jack Warner and Carl Laemmle, the Jews who headed Warner Bros. and Universal, limousined the Einsteins to their lots for private showings of favorite films. Ben Meyer, president of the Union Bank and a Jewish community leader, insisted the couple join him at his Montecito ranch.

Every edition of the local Jewish paper, The Bnai Brith Messenger, carried Einstein news. In his honor, L.A. Jews made out checks to cover “a huge reforestation project in Palestine which [would] be known as the Einstein Forest.” Something about Einstein had moved the Jews of the city in a way that no one before ever had (and no one after ever would). It was only after the scientist left that they sobered, leaving Dr. George J. Saylin, the head of the Los Angeles Jewish Kehillah, the official representative of the local Jewish community, to observe:

[W]e have overdone it, [and] we have permitted our emotions to get the better of us. Hero worship is as old as worship itself. Though we have accepted but one God, most of us cannot resist the temptation of manufacturing demigods a sideline.

Still, it was not just Jews who venerated Einstein. Five hundred high school girls greeted his ship in San Diego carrying poinsettias; he was a guest of honor at the Tournament of Roses Parade and the L.A. Chamber of Commerce annual banquet; 10,000 Angelenos greeted him at a ceremony on the steps of L.A.’s City Hall; Charlie Chaplin twice hosted the Einsteins for dinner at his home; and California Governor James Rolph visited the Einsteins at their borrowed bungalow in Pasadena. Perhaps it was no surprise, then, when the L.A. Times reported that Einstein “was deluged with offers from firms and corporations, running into thousands of dollars, for signed testimonials to the value he had found in their toothpastes, cigarettes, toilet waters, disinfectants, and this, that and the other.”

Einstein refused to go Hollywood and cash in on his fame, but he could never escape it. From 1929 to 1933, the L.A. Times published 1,322 articles about him, or just under four a week. Even in a town used to regarding celebrities with studied dispassion, sophisticates became worshipful schoolgirls when confronted with Einstein.

There’s a complex relationship between the adulatory reverence that the Jews of L.A. felt for Einstein and the reverent adulation that other city residents felt. All of them, to be sure, recognized that the man in their midst was the greatest physicist since Newton. (Einstein was 51 years old when he made his first L.A. visit; 10 years had passed since he had won the Nobel Prize, and his image was recognized around the world as the very icon of genius.) And they all understood, as Einstein’s host at Caltech, Nobel laureate Robert Millikan put it, that Einstein somehow represented a “scientific … approach to all problems … that throws into the discard all prejudices and preconceptions.”

But just what this meant was different for Jews than for the Protestants and Catholics among whom they lived. For Jews, Einstein represented a new, scientific social compact, in which a person’s mettle was measured not by how he prayed or by the music of his accent but by his accomplishments. Einstein represented these things in his vocation; the universe cared not a whit if its laws were decoded by a Protestant, a Jain, or a non-believing Jew. He represented these things in his actions, denouncing tyrants, preaching internationalism, embracing Zionism, and, while in Southern California, petitioning Governor Rolph to release two labor leaders doing time for a bombing many suspected they had not committed. Einstein demonstrated that a Jew, no less than anyone else, could speak truth to power without apology.

Einstein proved, as one L.A. Jewish leader put it, that “the question of the cultural value of the Jewish race no longer need to be asked.” Through the blinding brilliance of his science, Einstein transcended his Jewishness—and everyone knew it (and this, while never denying or regretting his Judaism). And so it was that L.A.’s Jews both loved Einstein like all the other Angelenos did and loved Einstein because all the other Angelenos did (as well as almost everyone else).

The way Einstein was regarded helps to illuminate a perplexing commonplace. Since the beginning of the 20th century, Jews have succeeded extravagantly in science. The statistics about Nobel Prizes are well-known: Of America’s laureates, a third in chemistry have been Jews, and more still in physics and medicine. Tabulating handshakes with the king of Sweden is a crass measure of scientific excellence, but it reflects something—though we don’t know exactly what.

A century ago, sociologist Thorstein Veblen hypothesized that it was because Jews, as outsiders, were skeptical of received wisdom, a trait that paid dividends in science. Others since have argued that Jewish “love of learning” accounts for their successes, or Jewish genes for intelligence. Recently, “Tiger Mom” Amy Chua and her husband Jed Rubenfeld argued that it is a tense combination of feelings of superiority (“we’re chosen”) and inferiority (“we’re loud and pushy”), along with a talent for deferring gratification that explains the success of Jews (among other immigrant groups) in America.

Whether or not there’s any truth to these claims, Einstein’s months in Los Angeles and the adulation that endured long after he had left suggest another explanation. Jews embraced science because they thought that science promised a society that would accept them, a society in which a Jew—even one of poor lineage, inadequate coiffeur, and radical sympathies, like Einstein—can be regarded as a great man among great men.

When Einstein died in 1955, although 22 years had passed since he last visited the city, the L.A. Jewish Community Council (LAJCC) quickly organized a memorial service, co-sponsored by UCLA, Caltech, and USC. Judge David Coleman, the head of the LAJCC, eulogized Einstein in the great physicist’s own words:

The striving for knowledge for its own sake, … the love of justice and the quest for independence—these are the motivating traditions of the Jewish people which cause me to regard my adherence to them as a gift of destiny.

By then, the three great universities that took part in Einstein’s memorial—and the best universities across the nation—boasted dozens of brilliant Jewish scientists striving for knowledge, justice, and independence. These women and men were embraced with some of the same enthusiasm that Einstein had found a quarter of a century earlier, and for the same reasons.

A lot has changed in the 84 years since Einstein caught his first glimpses of California and 500 girls with bouquets of poinsettias. No one much wonders today about “the cultural value of the Jewish race,” and thank God for that. But the need has not passed for a worldview that, as Millikan said of Einstein’s, “throws into the discard all prejudices and all preconceptions.” It was the hope that such a worldview would spread that drew so many—the Jews of L.A. and all the rest, all over the globe—to Einstein and to science. It was a beautiful and forlorn hope then, and remains one today.