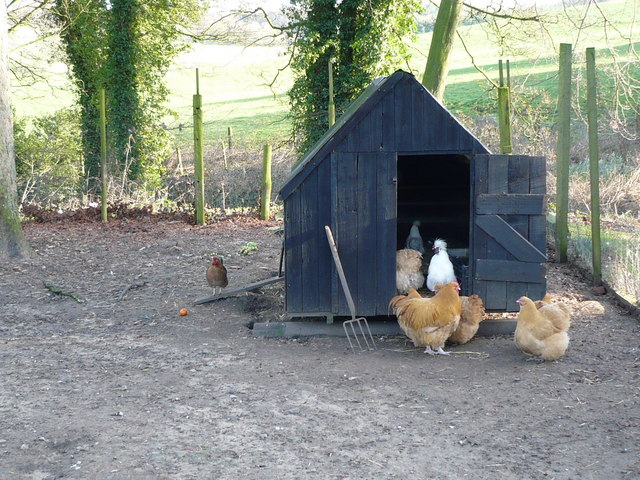 Raising backyard chickens isn’t anything new for my wife, Anne, and me. We have lived in Altadena for 16 years and have had flocks for almost as long. Let me say up front that Anne is the supportive and suffering spouse in this story. And so I’ve inserted her comments in brackets […] throughout.

My father introduced backyard chickens into our family in 1960s Orange County. Back then, there were still some patches of agriculture—an orange grove, strawberry fields—near our Stanton home. Dad, who grew up in eastern Texas where raising chickens and rabbits was a way of life, thought the chickens would teach my siblings and me great lessons in responsibility. These were lessons that have lasted us all our lives [and made our spouses crazy].

When I left home, I lived without a yard (or even a window box) for a number of years. Anne and I were apartment dwellers with a cat for some time before we bought our first home in 1998. The first thing we did while moving into the house was to get a puppy. Shortly after that, the opportunity to raise chickens presented itself. My sister and her family were leaving California for Virginia. So we inherited three small “silkies” (a breed of hen with fluffy feathers) and a half-bag of feed. Before I knew it, I was recreating a childhood experience. I even built a coop, though it made me wish I had paid equal attention to the carpentry skills my dad tried to teach me. [So do I, said the wife who has chased those biddies.]

Not only the birds survived, but so did our marriage. You see, Anne’s sense of humor is exhausted when it comes to the chickens. Why? Let’s just say she’s not a fan [I should say not]. The chickens don’t have much in the way of personality [Oh, please. Those biddies are just mean]. You’ve heard of the term “pecking order”? Well, it involves a chicken establishing dominance by pecking another chicken into bloody submission. This is how chickens form social order as a flock. If a chicken from a different flock shows up, they will gang up and kill the intruder. Doesn’t sound very nice, does it? So I keep only one flock at a time.

My source for chickens is a tale worth telling. Before infecting the crows that spread West Nile virus, the mosquitoes will bite the chickens. The San Gabriel Valley Vector Control (SGVC) places sentinel flocks in various locations —including my backyard—to collect blood samples from the flocks. The idea is to find the virus before crows start dropping from the sky.

Every year, our friend at SGVC contacts me to see how many birds I want. I take one flock—usually five chickens. The chickens are immune to the virus, and I have been assured that the virus cannot be transmitted to eggs.

By November, the days are short enough that the hens no longer lay eggs. A commercial operation would bring in lights to extend the daylight hours to keep up egg production. I decided I didn’t want to do that. I also decided that I didn’t want to feed chickens all winter. So I located a small processing operation in Sun Valley where the chickens would be butchered and cleaned. I know it sounds cruel and inhumane. But part of the exercise is remembering where my food comes from. I admit to being a hypocrite in not doing the actual killing myself. I also admit there is a five-minute pause when I consider whether there will be a flock next year. So far the answer continues to be “yes.” I find that keeping chickens still manages to ground me as an urban farmer.

I have three hens now that produce about one or two eggs daily. They have a free run space of 30-by-6 feet to dig, take dirt baths, and hide their eggs in interesting places. Egg collection time reminds me of another tradition—hunting for Easter eggs. I’ve learned to accept the critters where they are since I can’t reason with them. I occasionally find them curious, but they are not very bright.

You might wonder how I get along with my neighbors. One set are from Mississippi and the others are from Mexico and Guatemala; for them, having chickens around isn’t unusual or strange. I try to be accommodating in the name of being a good neighbor and steward. I don’t have noisy roosters, but hens can get loud at times. The run is cleaned out regularly to reduce flies, and waste goes into the composter. A mesh on the chain link fence keeps feathers from blowing into our neighbor’s yard. And extra eggs go to the neighbors first.

I’ve heard about people in the Los Angeles area abandoning their chickens for several reasons. They didn’t check their local codes for compliance. They didn’t consult the neighbors first. (You have to do that if you expect to get along with your neighbors.) The yard wasn’t secure enough. (You have to keep both chickens in and predators out.)

What do backyard chickens taste like? A 2-year-old is far too tough to roast or fry. I’ve made great soup stock and tried a coq au vin, which my wife refused to try. One rubber chicken was enough for her. [Blech—patooey!]

When I was a kid, my mother never allowed my dad to kill our chickens. We grew up a few miles from Buena Park and the Knott’s Berry Farm theme park. Back in the 1960s and early 1970s, the attraction was rural enough that chickens ran around the property where the replica of Independence Hall stood. Every fall, we’d head off in the station wagon to the Knott’s parking lot off of Beach Boulevard. We kids stayed in the car while Dad took a cardboard box containing the chickens and walked out of sight from us. He would return a minute later with the emptied box, and we went home, knowing that the birds were free.

I still remember the lessons I learned as a kid from chickens about life, death, and keeping the coop locked. That last one is important. Otherwise, a curious hen might find her way into your parent’s garden party and startle a guest with one drink too many in him. It wasn’t always about the eggs.