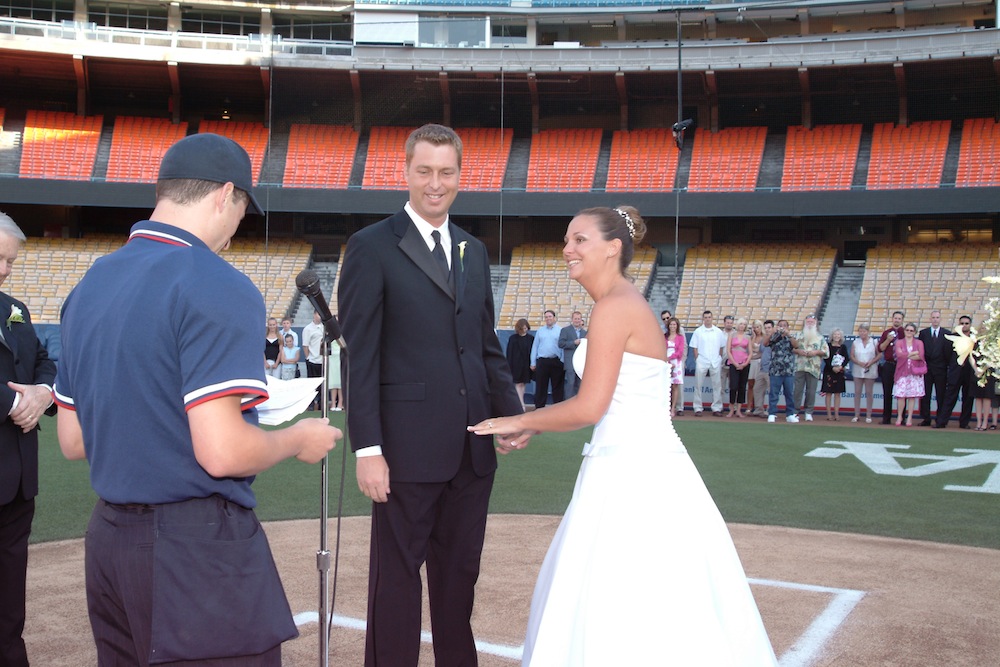 Newly engaged, I was on a plane to baseball spring training when I picked up my very first bridal magazine. Inside, I came across the news (to me) that Dodger Stadium hosted wedding receptions on days when the team wasn’t playing, and I knew right then. There was no way he was saying no to this venue.

Brendan and I got married at home plate nine years ago this summer, with family and friends standing on the dirt track between the dugouts (the Dodgers were finicky about letting people walk on their manicured grass). A close friend dressed up as an umpire and performed the ceremony as we stood in the batter’s boxes. Then we all went up to the Stadium Club for the reception, with dinner and dancing and Dodger dogs. It was my perfect day.

Like a lot of my fellow Angelenos, I’m a big fan of the Dodgers. I love to watch their games on TV. I love Vin Scully. And as a physical education teacher in the South Bay, I know how much sports and the rituals around them can mean to our lives, our health, and our communities.

But when I watch a game that’s taking place at Dodger Stadium, I see it in a special way. On a baseball telecast, you are constantly looking at home plate—which is also where our family began. Brendan and I now have two kids, 8 and 5, who like to watch the games with us. There is never a game when I don’t have a moment of remembering that day.

This season, my ritual of watching the Dodgers, and remembering our day, has been taken away. Dodger games are no longer available on my television—or on the TVs of 70 percent of people in Southern California, including Vin Scully himself. The Dodgers sold the rights to their games to Time Warner Cable for big money, but Time Warner has only 30 percent of the L.A. market. Given how much it paid for the rights, Time Warner wants to pass on its costs by licensing the games to our region’s cable providers, including mine, at a high cost. But those cable providers are balking, and negotiations are at a standstill.

Without the Dodgers on TV, I feel empty. And I’m angry, though I don’t want to join the ranks of hateful fans who are using social media to go after Time Warner. Instead, I wrote letters to Time Warner, to the Dodgers, and then to the L.A. Times. I haven’t gotten a response—and I still can’t get the Dodgers on TV.

For now, I’ve turned to radio. We have a little Radio Shack AM/FM radio that we used to take to the beach or the track. Now, I take it everywhere. But you only get Vin for the first three innings on the radio; on TV, he does all nine innings of the 100 or so games a year he broadcasts. Still, I listen as much as I can. I even take the radio to bed and fall asleep to the call of the game. Seriously.

Some people are coping by going to restaurants and bars, but so many establishments have DirectTV (which has the biggest sports packages) that it’s hard to find a place with Time Warner, and thus the Dodgers. I did make one trip to Vegas, which was fabulous: I could sit in the sports book all day and watch the Arizona Diamondbacks feed as they faced the Dodgers. And we have tickets to seven home games this season, since we split two season tickets with 11 other people. But that’s only a small fraction of the Dodgers’ schedule.

If this goes on much longer, I worry that my kids, and others, will lose a cherished daily ritual, and their connection of Dodger baseball. The game has a lot to offer. As an educator, I love to see children learn it because it’s complex, because it has rich history, and because it’s slow and teaches patience to kids who are used to the fast pace of technology.

My own kids now ask me, “Where are the Dodgers, Mommy?” I have no answer. They haven’t gone anywhere. But they’re invisible. And my kids don’t sit still for the radio.

So right now—or at least before my anniversary, June 25—let’s find a way to bring back the boys in blue. Bring back the great ritual of televised Dodger games. And bring me back home plate.