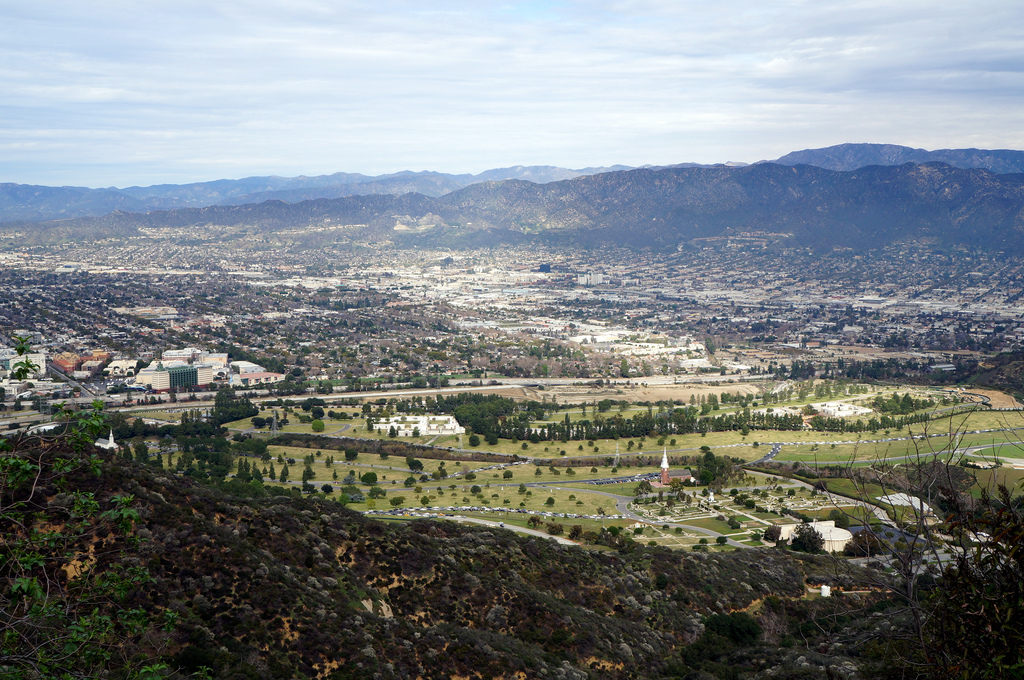 I live in the San Fernando Valley.

I never dreamed I would ever say these words. I grew up on the Westside of Los Angeles in the 1970s, and the part of L.A. where we lived was alive with entertainment and arts. Although I attended Catholic school in uniform each day, at night I’d go to concerts to hear undiscovered musicians who would soon become superstars, and on weekends I’d attend protests against the Vietnam War and in support of the United Farm Workers. There was a beach for picnics and surfing, mountains nearby, Hollywood just down the road, and oh, if you drove over the hill, that San Fernando Valley.

The Valley was the sensible sibling to the happy-go-lucky L.A. I lived in. I knew it as the place where factories such as Anheuser-Busch were located, and where you’d find hard-working, conservative people. If a friend announced she was leaving school to live in the Valley, it was the same as if she’d said she had a terminal disease.

I come from a long line of circus performers, and the rule that was enforced most strictly in our family was that we were always to share. Life in the circus often involved people giving one another a hand: If you have something, you always have enough to share with someone else. This was law to my parents—and it is second nature to me. I grew up thinking everyone was that way, and it was difficult to discover it wasn’t true. This is part of why I’ve felt the need to share arts with students as well as the communities I live in.

Fifteen years ago, I married into the Valley. My husband already owned his home in Canoga Park, so I moved in. Even though it was just over the hill, it seemed like an alien planet. I knew L.A. like the back of my hand, but here, I couldn’t find anything, didn’t know the streets, and had no friends—it was stressful.

I had been making mosaics since I was 6 years old, teaching art in L.A. schools and showing my own work around Southern California and the world, but for the first time, I had to work to join a community. One day, about two years after I’d moved to the Valley, I was looking under the “Community—Artists” category on Craigslist when I saw that there was going to be an opening for local artists at the Madrid Performing Arts Theatre. I live six blocks from the Madrid, so I called up the theater and spoke with the director—Denise Leader-Stoeber, the woman who would become my best friend. In the course of our conversation, it came up that I drew murals at chalk festivals. Denise said to me, “We are having a big Dia de los Muertos Festival. Can you bring some artists to draw?” I showed up three weeks later, with 40 chalk artists, and got everything, from food and chalk to prizes for the artists, donated. This evidently qualified me for the board of the Canoga Park Dia de los Muertos Festival, which I have been part of for the last 13 years.

Joining the Dia de los Muertos Festival board opened doors, and I began to meet people and get involved in the Valley. I volunteered for various activities, such as leading children’s art workshops and working with at-risk kids in our local Jeopardy anti-gang program with the LAPD. I also started organizing arts and crafts events for people of all ages that create community—where we’ll do things like create a picture frame out of donated tile and glass.

About a year ago, I participated in the National Endowment for the Arts Big Read program “Grand Souk” market event, where I displayed and sold my art. Through my involvement, I met Carolyn Uhri, the director of the San Fernando Valley Arts Council. We hit it off, and she invited me to a luncheon with the Council. I realized it wasn’t a very big group at all—and that I could be a part of bringing this once-active organization back to life. Over the next few months, I got more involved—but it became clear that there was really no hope in building the Council back to be what it was, or what it could be. Carolyn agreed, and we wanted to make a fresh start, so we founded what has now become the San Fernando Valley Arts Alliance. We are currently under the umbrella of the California Art League and hope to be an independent nonprofit by next year.

Since then, I have been recruiting artists to become part of the Valley Arts Alliance and getting involved with local schools. I’m currently working on a program called “6 X 6 X 6,” where we install six murals by six artists that are six-by-six feet for $6,000 at a local school. We have completed murals at two schools and are now signing up new schools for the fall.

As Carolyn and I became closer friends, we often discussed how there were many arts organizations in the Valley, but there was no brick-and-mortar place where artists could come and meet, exhibit, learn, or share. We started making plans for the San Fernando Valley Arts and Cultural Center.

A person who is truly dedicated to a cause for the right reasons is a force to be reckoned with; two people with the same vision are unstoppable. Carolyn had been looking for a location for the Center for nearly four years. About six months ago, she finally found a place: a 4,500-square-foot space in an industrial building on Oxnard Street in Tarzana. This meant we really had to step it up—and raise the money to lease the space. We’d stayed up until 3 or 4 a.m. talking about how to make the Center happen, and we didn’t give up. We approached our city councilmembers for funding but didn’t get anywhere, although one of them offered his support, as did our mayor. Eventually, we got a loan from a private donor, signed the lease last month, and have started build-out. Not bad for five months.

When it is finished, the San Fernando Valley Arts and Cultural Center will have two workshop spaces, with a moveable door that can be opened if more space is needed. It will be a place for our local opera company, our children’s theatrical group, and poets, photographers, and visual artists to meet—and for the public to know there is a place where they can be found. It will be a common location for workshops, exhibitions, rehearsals, and performances. It will also house an archive that lists murals and public art throughout the Valley. Carolyn and I envision the Center as a place to congregate and celebrate ideas, and where people can always come to view new and exciting pieces of art created by local artists.

As president, Carolyn will continue to guide how the Center works and runs on a day-to-day basis. As for me, I am the director of public art, where I’ll continue to be responsible for the “6 X 6 X 6” program and for other projects that make the Valley a more beautiful place, like a fountain restoration we’re doing at a local college. This means I’ll have a smaller role in the operation of the Center, but that’s fine with me. We are growing, and I love making things grow—and I will always be able to look back and know that I helped make something of quality and service happen. It will make me smile, till the next thing comes along.