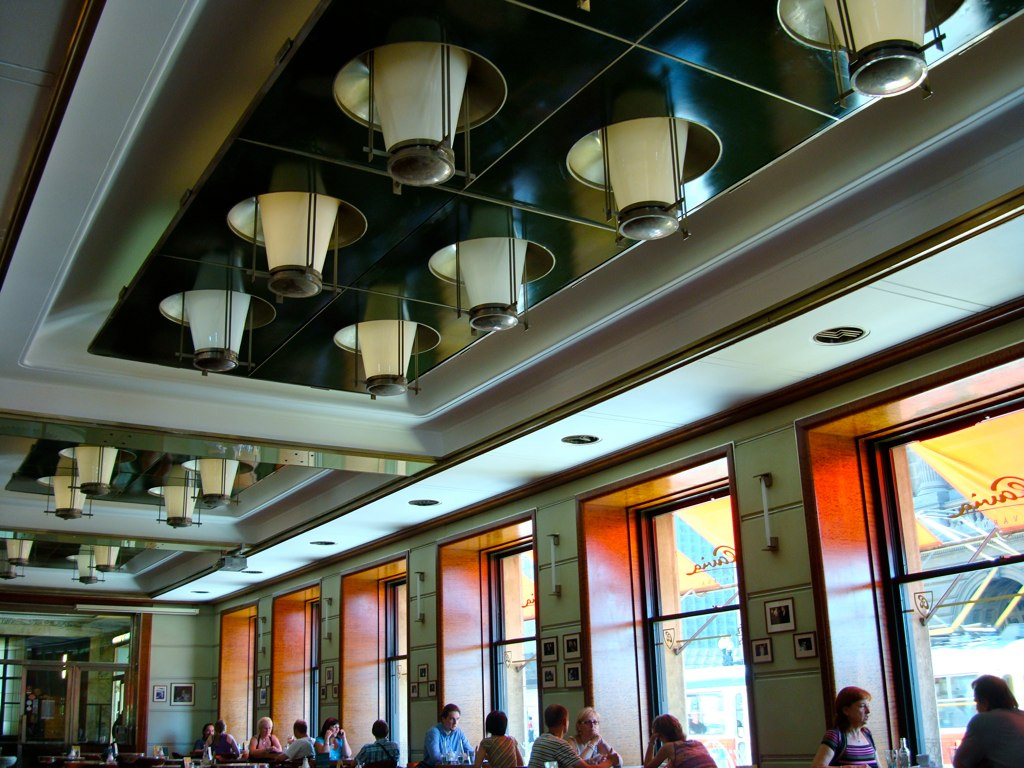 A middle-aged man sits in a café, his newspaper unopened on the table in front of him. He cannot keep his eyes off the slender young woman who has perched herself on the corner of his table. Naked as Eve, she comes in a fetching shade of translucent green. A waiter hovers nearby, discreetly observing the density of this unexpected encounter.

Viktor Oliva’s painting The Absinthe Drinker (1901) hangs in the Grand Café Slavia, one of Prague’s oldest coffee houses. Much of what the guidebooks have to say about the Slavia is wrong, but who wants facts when we can lose ourselves in landscapes of desire? Bedřich Smetana, composer of the Czech “national opera” The Bartered Bride, could not have been a regular because he died several months before the café opened. Franz Kafka and Rainer Maria Rilke are equally unlikely to have hung out in the Slavia (as Lonely Planet asserts), because turn-of-the-20th-century Prague was a city divided between Germans—many of whom, like Kafka, were Jews—and Czechs, and the Slavia was emphatically a Czech establishment.

Whether or not Kafka and Rilke ever set foot in the Slavia, spending time in and around the café, and the National Theater, offers a window into over a century’s worth of Prague history.

The café’s location, across the street from the National Theater, speaks volumes. The opening of the theater on June 11, 1881 (with Smetana’s previously unperformed patriotic opera Libuše, whose heroine was the mythical founder of Prague) was a high point of the 19th-century Czech national revival, but the building burned down after only 12 performances. The theater was reconstructed over the next two years. In 1884, the Slavia first opened its doors on the corner of what were then the Francis Embankment and Ferdinand Avenue. They are now called the Smetana Embankment and National Avenue: Dead Habsburg emperors had no place in the independent Czechoslovak Republic declared on October 28, 1918. The café took its name from the mythical mother of the Slavic peoples, whose sculpture originally stood where “The Absinthe Drinker” now hangs.

A group of young artists who have been known ever after as the “Generation of the National Theater” lavishly decorated the theater interior with scenes from Czech history and myth. Emblazoned above the proscenium is the proud motto “The Nation to Itself.” But Vojtěch Hynais’ theater curtain introduces a curiously discordant note into this semiotic landscape, like a visual Freudian slip. The model for the sexy winged Victory at the center of his patriotic allegory was the French painter Suzanne Valadon.

Then just 18, Valadon often sat for Hynais, who was living in Paris, in Montmartre, when he was offered the National Theater commission. Viktor Oliva’s green goddess, too, was a souvenir of years spent in happy exile by the Seine. Oliva lived in Paris for a decade before returning home to edit the popular cultural weekly magazine Zlatá Praha (Golden Prague) in 1897.

Until the communists shifted Prague into Eastern Europe in 1948, the city of light drew Czech artists like moths to a flame. Alfons Mucha and František Kupka were the most famous of dozens of Czech expatriate artists working in Paris. The surrealist painters Jindřich Štyrský and Toyen (Marie Čermínová), who lived there from 1925-1928, found time to produce one of the best guides to the “center of science and art, focus of contemporary culture, cradle of modern culture” ever written, published by Odeon in 1928.

Odeon was the house publisher of Devětsil, the astonishingly fertile group of Prague-based writers, artists, architects, composers, and theatrical directors and performers who dominated the city’s avant-garde scene throughout the 1920s. Several Devětsil members, including Štyrský, Toyen, the poet Vítězslav Nezval, and the critic Karel Teige, would go on to form the world’s first surrealist group outside Paris in 1934. “Every so often,” relates the Devětsil poet Jaroslav Seifert in his memoir All the Beauties of the World, “we abandoned the welcoming and hospitable National Cafe … For the smoke and odor of the old actors’ Slavia … We used to sit there by the window facing the embankment and drink absinthe. It was a little flirtation with Paris, nothing more.”

The writer Karel Čapek and his brother Josef, a cubist painter destined to die in Bergen-Belsen a month before World War II ended, would pass by, taking their constitutional along the embankment whatever the weather. They sported “the same gaudy colored scarves round their necks, golden gloves and a bamboo cane … It was showy, but that was exactly what they wanted.” The Čapek brothers invented the word “robot,” a universal metaphor for a modernity gone mad, in their play R.U.R., which premiered at the National Theater in 1922.

By the time Seifert published All the Beauties of the World with an émigré publishing house in Toronto in 1981, he was his country’s greatest living poet—and officially persona non grata. It is not an unusual combination. Stripped of the presidency of the Writers Union after the Soviet invasion of August 21, 1968, Seifert provides a link to a darker chapter in the city—and the Slavia’s—history.

Gustav Husák, the “President of Forgetting” (as Milan Kundera once called him) installed by the Soviets, purged the professions, the universities, and the arts, shunting the intelligentsia into manual jobs that left them plenty of time for dreaming. From 1969 to 1989, your waiter at the Slavia would likely have worked for the secret police. Waiters formed a strangely important caste in the Communist era, equally well positioned to inform on customers or change money for them on the black market. With a Czech eye for black humor, Husák’s policy of reversing the reforms and liberalization of 1968’s Prague Spring was known as “normalization.” Most people took Voltaire’s advice in Candide and tended their gardens, assuring anyone who asked that all was for the best in the best of all possible worlds. Some, like the characters in Kundera’s novels, turned to the private consolations of the alcoholic and the erotic.

Artistic and intellectual Prague became an Alice-in-Wonderland world in which art exhibitions were staged in abandoned quarries, plays premiered in basements and private apartments, and seminars took place in cafés. The Slavia became a favorite haunt of the absurdist playwright Václav Havel, the poet and collagist Jiří Kolář, and other dissidents. Looking through the Slavia’s plate-glass windows, Havel could see Hradčany Castle, seat of the President of the Republic. But the notion that the playwright would succeed Husák in that office would have seemed as preposterous then as anything in the Slavia’s absinthe-fueled dreams.

The Slavia was closed throughout the 18 months I spent in Prague from 1991 to 1993, in the uncertain times between the fall of communism and the triumph of McDonaldization. But every time I’m in town nowadays I make sure to stop by for a turecká kava, Turkish coffee. The coffee, made by pouring boiling water on coffee grounds and waiting for them to settle at the bottom of the cup, has nothing to do with Turkey. It reminds me how things used to be before the Czech Republic joined the EU and the city was invaded by Italian espresso.

But truth be told, it is Oliva’s necrophilic temptress that draws me back again and again. She is no bad muse for “the magic capital of old Europe” (as André Breton called it), where things seldom remain themselves for long and metamorphosis is a way of life.

In honor of the poet
We used to drink absinthe. It is greener yet
Than everything green,
And when from our table we looked out the window,
Below the banks flowed the Seine Ah yes the Seine!
Because not far off, standing astride [the hill],
was the Eiffelka.

The lines are from Seifert’s poem “Café Slavia” in his 1967 collection Halley’s Comet. The poet to whom he refers is Guillaume Apollinaire, who visited Prague (very briefly) in March 1902 and incorporated his memories of the city in “Zone,” a foundation stone of literary modernism.

If you look out from the Slavia across the Vltava, toward the Castle, you will indeed see the Eiffel Tower. Sort of. A small-scale replica of the Parisian structure, 60 meters high, stands atop Petřín Hill. It was erected for the Jubilee Exhibition of 1891. Visible for miles around, it has survived all the vicissitudes of Prague’s 20th century, a salutary reminder of the infinite malleability of political geographies and the indestructibility of dreams.