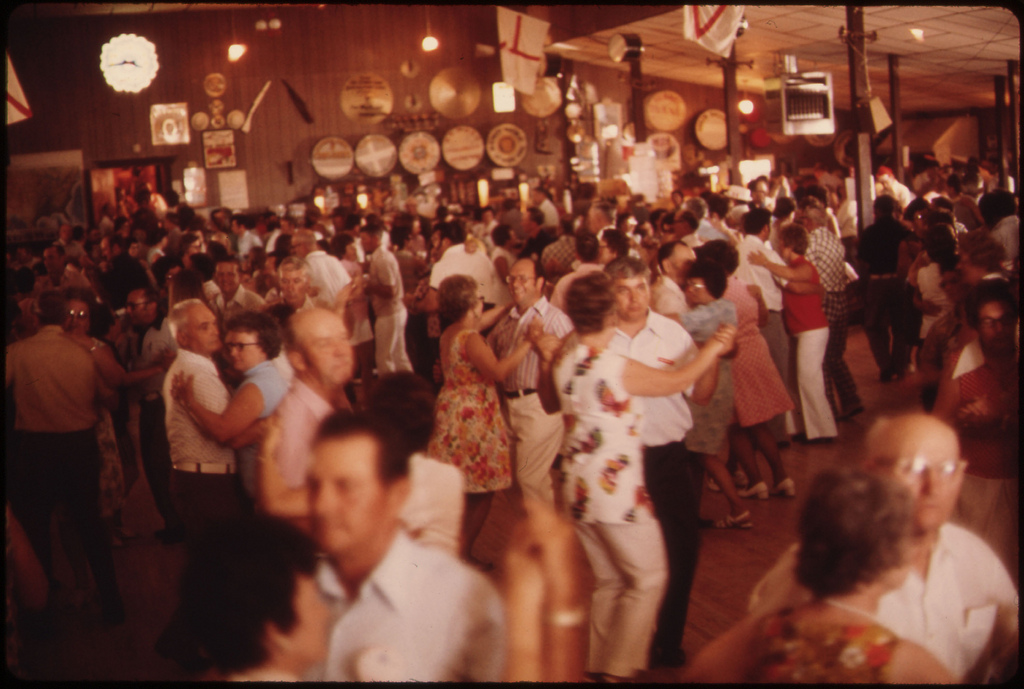 Couples whirled across the floor as the band played music reminiscent of the Rat Pack days. The lights were dim, and strings of small white lights stretched like the spokes of a wheel to corners of the round room. At 51, I was the youngest person there—but I wasn’t dancing.

I was at a St. Patrick Day’s dance sponsored by the Britannia Club of Los Angeles. I was there with my 70-something aunt, who’s a member (though she is no Brit). Dorothy has multiple sclerosis and uses a walker, so she can’t do much dancing now. But she still loves parties.

The dance was held at the Veterans of Foreign Wars (VFW) Hall in Torrance, a middle-class city of one-story houses with slightly brown lawns just south of L.A. When we arrived, my aunt and I walked through a brown-paneled entry hall lined with black-and-white photos of men in uniform. The round building was originally a water tower, but it became too small for the growing city. Decades ago, the VFW bought it, paneled over the steel tank walls, and added two rooms—a bar on one side and a kitchen on the other.

I have always been close to my aunt. I have many fond memories of staying with her nearly 30 years ago. She lived on a boat in Marina del Rey then, and I would spend hours roller-skating on Venice Beach when I visited her from my home in Texas.

My adult life has been one of movement. I moved about every two and a half years until I landed in Shanghai in 1998. I stayed there for six years, then returned to my old habits and lived in Beijing for two years before returning to Shanghai for two more.

After working as a reporter in China for more than 10 years, I moved back to the U.S. in 2008. I landed in Los Angeles because, as my boss at Automotive News, my then-employer said: “That’s where the cars are.” I’ve been in Los Angeles ever since. Not only do I love the weather, but I have family here and own my place. So L.A. has a bit of a hold on me.

My aunt Dorothy and I hang out a lot. We go to free concerts in the summer. We go to museums and check out new restaurants. She lives in an apartment in Venice now, though her old boat still floats forlornly in its slip, waiting for her nephew who took over the rent payments to visit.

We went to the dance that night with Dorothy’s best friend, a 95-year-old woman—also named Dorothy—who lives two houses down. The neighbor Dorothy is losing her short-term memory and calls my aunt every morning to find out what day of the week it is.

On our way to the dance, we picked up another friend of Dorothy’s, who’s also in her 90s. Known to all as Betty Boop, she used to work in a Hughes Aircraft factory. She lives in a small house on the Venice canals with her son, who suffered a stroke several years ago. He came out of the house when we picked her up. I thought: “Man, he is old.” Then I realized that—given his mom’s age—he’s probably in his 70s. Whoa.

Betty Boop’s house is dwarfed in both size and style by the houses around it. Real estate in Venice, especially on the canals, is worth a lot. Even this tiny house, where Betty has lived for more than 50 years, is probably worth $1 million. But I’m sure she won’t sell. It is too full of memories.

The people I encountered at the dance, like Betty Boop, had an appreciation for permanence and for the value of memories. Many of them had known each other for decades. One couple was celebrating their 50th wedding anniversary. It was the second such celebration that month, according to a couple at our table. They had known each other for 30 years and got married after their respective spouses passed away.

It turns out that dancing with the same person for decades makes for some skilled dance moves. I joined in for the line dances, but mostly I watched enviously as couples twirled about the floor. “Maybe someone will ask you to dance,” Aunt Dorothy said. “I am not good at partner dancing,” I replied. “I always try to lead.”

Dorothy, Betty Boop, and I left before the last song. I departed feeling a bit envious of a group who had known one another so long. But I was also glad I hadn’t been in the same place for decades.

And the experience made me appreciate the many good friends who have stayed with me even after I moved across the ocean. Permanence isn’t only gained by being in the same place for decades. Memories create permanence—even in a transient life like mine.

I’ve called Los Angeles home for more than six years now, which feels permanent for me. And I return to my previous home, Shanghai, pretty regularly. As I get older, I may become less transient. But I sometimes itch to make memories in a new place. I’ll likely give into it one day. I figure that finding new experiences in new places will give me more varied memories for those days when I’m no longer the youngest person in the room.