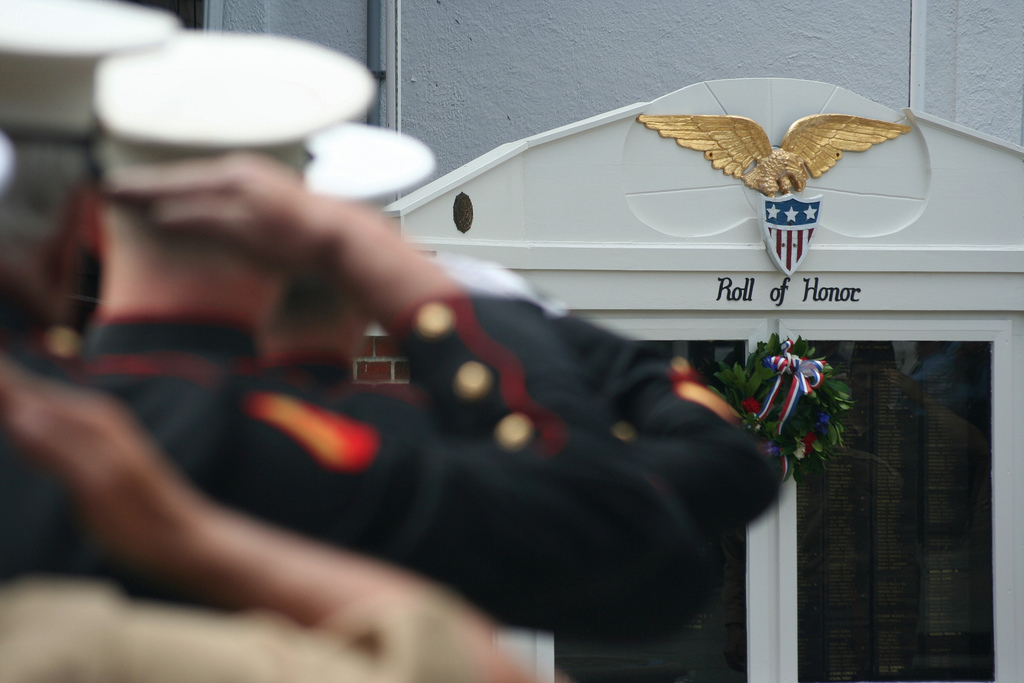 “They think I’m some kind of damned hero,” the young veteran, a former airman, said in a hushed tone while ducking his head and quickly glancing behind him.

His voice and body language communicated that he was distressed, but it wasn’t due to a war-related memory. It was ironically caused by one of those obligatory moments at a Memorial Day observance when someone with a microphone solemnly asked all the veterans in the room to stand so that they could be publicly thanked as “America’s heroes.”

The airman was a munitions specialist who loaded ordnance onto Air Force jets bound for remote valleys in Afghanistan. While he was stationed in Afghanistan, he never left the base and spent his time in relative safety compared to service members who left the wire to fight insurgents.

He knew he didn’t belong on that pedestal. But how could he possibly dissuade the well-meaning folks who smiled and clapped for him? They weren’t applauding the man before them. Rather, their applause complied with the now-expected reaction to all veterans.

I, too, have been to events like this one, which the airman described to me after a recent student veterans meeting. It also made me feel uncomfortable to represent all my fellow veterans and the complex and often contradictory emotions wrapped into the “veteran” label. I was a peacetime soldier who served before the start of the Iraq War. I’m proud to have served, but I know that I’m not a hero.

On Memorial Day, when our thoughts will be with our fallen brothers and sisters, I ask you to reconsider excessive use of the word “hero.” Please don’t perceive it as ingratitude. The word is just too intangible and inaccurate, and it has a different meaning to veterans than to the general public. Whether the title is deserved or not, most of us feel uncomfortable with it.

Even America’s newest living Medal of Honor winner, Army veteran Kyle White, feels the same: “I was just doing my job,” he said in an NBC story. “I am still uncomfortable with hearing my name and the word ‘hero’ in the same sentence,” he added in a CNN story. That is not false modesty. Other combat veterans I know feel the same as him.

We all had jobs to do and orders to follow, and we did so to the best of our training and abilities. Like a very large proportion of living American veterans, the airman and I fulfilled our duty without hearing a single shot fired in anger. And, like all veterans, we implicitly understand that we performed our roles in service of a larger mission. At least as important, we were also in service to each other.

Heroism is not a goal for any service member, nor should it be. Point blank, heroism is for war movies. Professionals in this business know that when the American soldier must rely on heroism, it means that something has gone very wrong in the planning and execution of a mission. Soldiers train, plan, and fight in a way that takes heroism out of the equation. I was explicitly taught by my leaders and noncommissioned officers that a hero is the last thing you want to be. This was a cultural norm reinforced throughout training at different levels and extracurricular professional development.

“Hero” has the connotation of a very explicit four-letter word in military culture. A “hero” is someone who recklessly endangers himself or his buddies. Want to go home? Then don’t be a “hero.” Want to get out of that foxhole alive? Well, you’d better hope that you’re not sharing it with a “hero.” “Heroes” draw fire. “Heroes” take unwarranted risks. A “hero” goes out of his way to act or appear heroic. Most who’ve worn a uniform want nothing to do with these people.

When called upon by the direst of circumstances, though, we’re grateful that true heroes in our ranks step forth. I think of men like Sergeant First Class Alwyn C. Cashe. His uniform soaked in fuel after a roadside bomb explosion, he exposed himself to enemy rifle fire to rescue his soldiers who were trapped in a burning Bradley Fighting Vehicle. While pulling the driver out, Cashe’s uniform caught fire. After carrying the driver to safety—while still on fire himself—Cashe returned to the burning vehicle five more times. He would later die in a Texas hospital from burns to 72 percent of his body. He persisted in his rescue effort despite unthinkable pain and danger. No one asked him to; he did it for his soldiers. All six of them survived that day, and three of them are still alive thanks to him. He is a true hero.

So is Sergeant First Class Danny Ferguson, who died while using his body to block a door to protect a room full of soldiers from the shooter at Fort Hood in April. Cashe, Ferguson, and White (even though the status unsettles him) are true heroes. If faced with similar circumstances, who among us would actually muster that kind of courage?

We’re grateful for our heroes. True heroes have qualities we aspire to but hope that we never have to emulate. That’s because the circumstances for heroic action must exist before an individual can come forward to earn the title. Absent those conditions, we’re just doing our jobs like everyone else. Thus, many of us feel uncomfortable when the word “hero” is used loosely because we know better.

So why is there such excessive use of the term? An older veteran suggested to me that this is America’s way of making up for its neglect of Vietnam War veterans. By heaping praise upon a new generation, perhaps America is trying to heal its soul. Perhaps it’s trying to come to terms with its conflicted feelings about the most recent wars. This notion becomes more palpable with messages to “support the troops but not the war.”

The excessive use of the word “hero” also highlights a growing disconnect between those who are personally touched by war and the general population. During previous wars, there was a significantly higher percentage of the population in uniform, and Memorial Day directly touched most American families. Today, less than 0.5 percent of our population is in uniform. Memorial Day seems transformed from something intensely personal for those who have lost family members or comrades to a spectacle from which many Americans have become emotionally disassociated.

Some correctly recognize that how we treat our veterans is an important reflection upon our society. But I think there’s a better way to express appreciation for veterans than simply calling them heroes. Help America follow through with its promise to veterans by ensuring that the Veterans Administration is well led, well managed, well funded, and accountable. Increase your support for veterans’ transition to civilian lives and employ them. Help the less fortunate veterans in our ranks. But simplest of all: just say “thank you” to acknowledge our service to America.

We served, and now we’re moving on with the rest of our lives. At the close of the Civil War, General Robert E. Lee’s words to his troops in his last address at the Appomattox Court House still resonate for veterans today, regardless of any one individual’s position on that war or any other: “And if you make as good citizens as you have soldiers, you will do well.” We are doing our best, just like you: We’re sons and daughters, coworkers, and neighbors, and despite stereotypes (both positive and negative), we’re also just as complex. We struggle our best to live to a high standard, but we’re very much human. Some of us are proud of our service, and some of us are trying to overcome aspects of it, but we’re neither heroes nor victims. All of us understand that we were in service to something greater than ourselves.

This weekend, our thoughts will be with those we have lost. That’s the real purpose of Memorial Day. Please save the title of hero for Cashe, Ferguson, and the rest of our dead. They won’t flinch when they hear it.