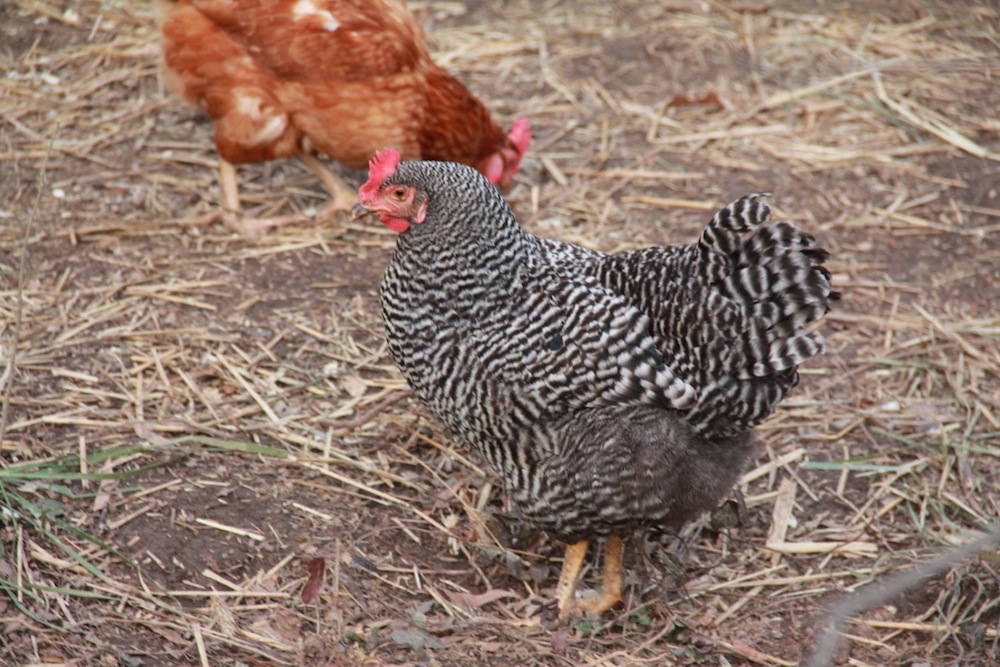 The fox had been casing the joint for several minutes.

Afterward, a neighbor would report that she had seen the grayish-red beast lurking on the street as she went off to the gym at around 7:30 p.m. That would turn out to be the first sighting of the perpetrator of a daring urban raid.

The fox then moved two doors down, to the house where a white Labrador retriever normally patrols the yard. Sadly, disastrously, Buddy was on vacation, his premises unguarded. Two other neighboring dogs remained silent, unwilling to get involved as the invader prowled the bushes, looking for weaknesses in the perimeter fence.

At 7:43 p.m., as my wife and I were finishing putting our children to bed, the fox breached the chicken wire fence and darted into my chicken coop.

The ever-watchful eye of my webcam—operating in night-vision mode—caught the fox as it darted into the coop and jumped up and snapped at our brood of hens.

Chicken Mirabella, a beautiful barred rock hen, darted out of the coop, squawking and luring the fox out of the henhouse.

I arrived on the scene less than a minute later, after my wife heard the commotion and reported a likely cat in the chicken run.

Alas, it was no cat. I arrived at the run to witness the fox snapping at the tail feathers of Chicken Sambuca, who was frantically trying to take cover in an azalea bush. My yell caused the fox to break off the attack and retreat to the neighbor’s yard.

With a freakish spring sleet falling, the fox paused for a split second in the glow of the neighbor’s backyard spotlight. It looked at me, and then left.

Inside the run, Sambuca was alive but shaken, as were two other hens. But the body of Chicken Mirabella lay lifeless on the ground.

As the sleet turned to rain, I dug a grave for the hen. In our home, Mirabella will long be remembered as our best layer.

For the last decade, I have covered the U.S. military and have made repeated reporting trips to Iraq and Afghanistan. Over time, I have come to understand the basics of constructing good defenses.

By the day after the attack, the news had spread in certain halls of the Pentagon. Many of the officers I talk to on a daily basis raised serious questions about “the force protection measures” in my home. I could not dispute it. The chickens had not been locked away early enough. There were gaps in the fence. Had my chicken coop been a military post, I would have been relieved of command.

Still, some in the military found things to praise.

After analyzing the video of the attack, Yeoman First Class Juan Cisneros suggested that Mirabella’s actions met the military definition of heroism. At the cost of her own life, she had saved the remainder of the flock, luring the attacker away, alerting the not-quick enough reaction force.

In other quarters, reaction to the attack ranged from sympathy for the plight of the modern urban farmer to surprise that I had a chicken coop in my backyard.

Raising chickens is actually a perfect activity for people who are stressed out by work and family duties and thus have little time for any hobby that is not a household chore in disguise.

I first acquired my chickens by renting them. The good folks at Rent-A-Coop provided us two hens and a portable coop for a month. It was a perfect way to test exactly how much work the hens would be.

Chickens were really quite easy to take care of. The hens must be released from their coop in the morning to roam their run, and given food and water. They spent the day strutting around their run, looking for bugs, and taking dirt baths. Once a week, I cleaned out their coop and put in new fresh hay. Of course, I would learn too late the critical nature of another task: corralling the birds into their coop before prime fox hunting time.

And so after our one-month experiment, we extended for a month, then we decided to buy the two golden comets (along with two other barred rocks) from our chicken rental agency.

Unlike the other pets in our house—a pair of cats and a dozen fish—the chickens pulled their weight. The good layers gave us an egg a day in the spring, summer, and fall. You can also be sure your eggs are truly organic. When my mother-in-law suggested adding more omega-3 to my kids’ diet, we just mixed chia seeds into the chicken feed.

Many local ordinances still ban backyard chickens, but laws are being repealed around the country as the public comes to see that a few hens running around a backyard—as long as there are no roosters around—do not cause much trouble. (Roosters are loud, and true to their children’s book reputation, rise early. But of course you don’t need a rooster to have a bountiful supply of eggs. And so the dabbling urban chicken hobbyist can do without.)

I had hoped that the fish in our tank would be the primary way we’d teach the kids about the fragility of life. Unfortunately, it ended up being the chickens.

A friend of mine wrote after Mirabella’s death that fox attacks are the very reason he does not name his hens. But in our family, the chickens existed somewhere in the continuum between pets and livestock. Mirabella’s death was not nearly as devastating for my kids as the death of beloved dogs and cats was for me as a child.

The fox attack did lead to an interesting discussion with my 6-year old about the nature of predators. He was initially full of anger toward the fox. My wife and I tried to explain that the fox was not bad, just filling its role in nature.

Nevertheless, we did all feel the loss of Mirabella. Our birds all have distinct personalities and all are smarter than I would have thought chickens could be. It was hard for us to conceive of spending weekend afternoons watching them run around our yard without offering them names.

And so it was with a heavy heart after Mirabella’s death that we trudged forward. I spent the morning after the fox attack—at the advice of chicken-raising friends from Maryland to Colorado to Washington state—reinforcing my fence, burying chicken wire under the earth, and doing what I could to upgrade the force protection measures in place.

It turned out to be inadequate. Three weeks later, the fox came back to finish the job. All three remaining hens were killed, beheaded by the beast.

The follow-up attack, quickly labeled by a friend as Hengazi, stunned me even more deeply than Mirabella’s death. With the attack and my inability to protect the flock still fresh in my mind, I am at a loss.

For now, the old run has been pulled up, and flowers planted in the well-fertilized soil of the chicken’s former stomping ground.

It is not clear whether a new, Fort Knox-style chicken run can be constructed in my backyard or if my chicken farming days are over.