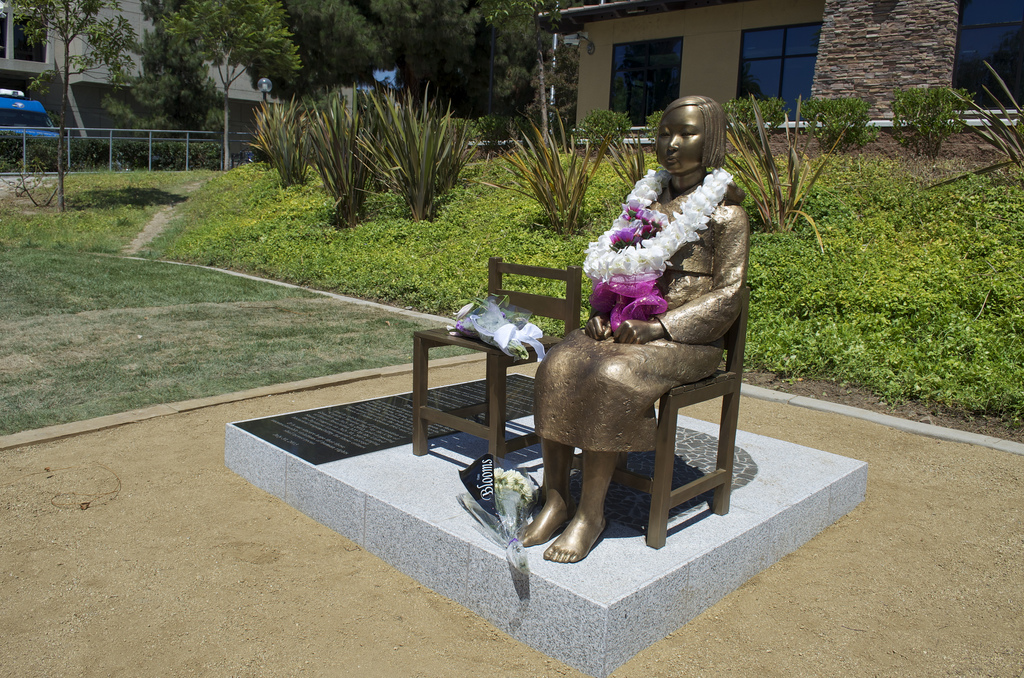 A federal judge will soon decide whether to remove a memorial in Glendale, California to so-called Korean “comfort women” who were forced into sexual slavery by Japanese soldiers in World War II. The case—and the controversy that created it—serves as a reminder that the legacies of war are contested and that the pursuit of virtuous public memories of war will inevitably clash with personal tales of anguish.

When it comes to brutal acts of history, desires to remember are inevitably challenged by cravings to forget. No nation or group wants to be seen as a perpetrator of evil deeds. Patriots across the world celebrate the heroism of soldiers and noble actions while ignoring dark or painful chapters of their nation’s past. For instance, many Americans have embraced a mythical view of their nation’s involvement in World War II, preferring to commemorate the greatness of the generation that fought rather than recall the horrors of Hiroshima, racial strife that permeated their military forces, or the trauma that soldiers brought home.

Acts of cruelty also raise questions of liability. It is hard to imagine the U.S. or England ever being receptive to claims from families of the nearly 800,000 innocent civilians who were killed by World War II allied bombings in Europe. Japan and America have argued since 1945 over whether the U.S. is morally responsible for the atomic bombings that ended the war and resulted in the deaths of hundreds of thousands of noncombatants.

The United States finally agreed to pay reparations to Japanese-Americans interred in prison camps from 1942 to 1946. But it took 40 years, and came only after the story emerged of Japanese-American valor and sacrifice in fighting on America’s behalf in Europe. This minority group—deprived of their possessions and rights during the war—had to link their claims to powerful patriotic identities associated with the American war effort—and downplay their victimization—in order to gain the hearing they deserved.

In a curious cultural turn, Japan actually embraced victimization in much of its public remembrance of World War II. The American bombings brought not only horror and death but also a rationale to avoid accepting any responsibility for brutal deeds like Pearl Harbor or the Rape of Nanking, in which Japanese forces raped and murdered thousands of Chinese citizens. For decades after the war, the narrative in Japan was that the nation’s people had been wronged by military elites who recklessly tried to expand Japanese power in Asia. Textbooks generally sidestepped any notion of responsibility and featured stories of Japanese suffering or kept silent about wrongdoing. However, though the hibakusha—Japanese citizens disfigured by atomic radiation—were certainly victims, they were shunned because of fears that they might spread radiation sickness. They were also troubling reminders of the devastating results of some of the Japanese government’s policies.

Similarly, the claims of Korean “comfort women” have always proved troublesome to the Japanese memory of the war. Their story raises questions not only about Japanese responsibility for sexual abuse but calls to mind the larger legacy of Japanese brutality in East Asia in the late 1930s and early 1940s. In 1991, three Korean female victims filed a lawsuit against the government in a Japanese court. Their cause was supported by women’s rights groups from many nations that were less invested in the politics of war commemorations than the problem of gender abuse. Japan rejected the women’s claims, and some Japanese officials asserted that these women had actually engaged in prostitution. Several years later, Byun Young-joo, a South Korean feminist filmmaker, produced two documentaries—The Murmuring (1995) and Habitual Sadness (1997)—that featured “comfort women” recalling their ongoing struggles since the war. Some spoke for the first time in years about their abuse, about being raped as teenagers, and of the physical and emotional pain they endured, with tears rolling down their faces. After the films came out, women’s groups from throughout Asia staged a tribunal in Tokyo in 2000 to hear testimony from “comfort women” and others as part of a larger public review of the Japanese emperor’s responsibility for wartime atrocities.

These women personify the difficulties in addressing trauma and persistent suffering in patriotic commemorations. Before Vietnam, American war memorials tended to efface a legacy of suffering and death and promote images that were more heroic. When it was created in 1982, the Vietnam Veterans Memorial in Washington, D.C. was controversial because it refused to erase the war’s legacy of agony by completely focusing wartime memories on the thousands of Americans who died.

It was certainly public knowledge that many Americans died in World War II or returned home with emotional problems. But until the Vietnam War, such traumatic memories were not at the forefront of the American commemoration of the conflict. Think of the famous memorial to the American victory on Iwo Jima erected near Washington, D.C. in 1954: Bronze figures of GIs are fused together in a victorious flag-raising. There is no mention on the monument that anyone died, a startling omission considering that one-third of all Marines who were killed in World War II lost their lives on that island. Most Americans still do not know of the struggles the men featured on the memorial encountered for decades after they came home. Ira Hays suffered from what’s known as survivor’s guilt and was upset that the sacrifice of Native Americans like him did not lead to improved living standards on reservations. James Bradley was haunted for his entire life by the sight of the mutilated body of a close comrade he served with on Iwo Jima.

The Glendale monument is not the first erected on American soil to raise issues of Japanese wrongdoing. Veterans of World War II who survived the Death March of Bataan and suffered in POW camps in Asia are featured on a number of memorials in New Mexico. In Las Cruces, New Mexico, for instance, bronze figures of American prisoners convey a sense of distress. Indifferent to the nature of American-Japanese relations, these men refused to subscribe to mythical ideas about a so-called “good war” and insisted their pain not be forgotten.