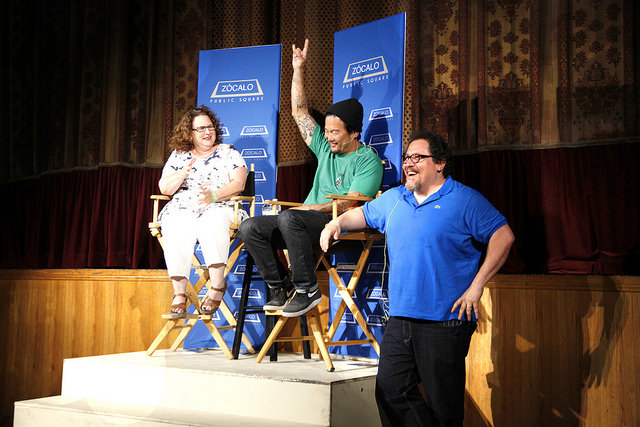 In 2009, Zócalo was the first L.A. organization to invite Roy Choi—then a restaurant-chef-turned-food-truck-operator who was selling Korean barbecue-filled tacos on the streets of Southern California—to speak on a panel about food. Five years later, back on Zócalo’s stage, Choi told a massive, standing-room-only crowd that “it’s nice to come full circle.” He was launching the Zócalo/KCRW “My Favorite Movie” series at downtown’s Million Dollar Theatre.

Today, Choi’s restaurant empire stretches across the city, he’s the author of a memoir, L.A. Son, and he and his partners have even opened a new hotel in Koreatown. So perhaps it’s fitting that Choi’s favorite movie, Chef, chronicles a journey as wild as Choi’s own. Writer and director Jon Favreau stars as Carl Casper, a chef at a fine dining restaurant in L.A. who melts down after a bad review and then hits the road in a food truck to peddle Cuban sandwiches.

Choi, who served as a co-producer and technical consultant on Chef, introduced the film and then sat down after the screening to talk with KCRW Good Food host Evan Kleiman. But first he thanked the receptive hometown crowd: “I love you guys, man.”

Kleiman asked Choi if he felt uncomfortable working on a movie that seemed to have been based on a skeleton version of his career.

The script was written before Favreau knew his story, said Choi. Reading the script for the first time, Choi felt like he was reading about Carl Casper, not about himself: “It’s just one of those coincidences that my life is exactly the same.”

Moments later, Favreau surprised the crowd by joining Choi and Kleiman on stage. He explained that he’d raced over from Marina del Rey after Choi texted him: “‘Dude, there’s a lot of people here. If you come down here, they might lose their minds.’”

Favreau likened the process of making Chef to the way Choi cooks. Choi elevates his cooking by “putting top-shelf ingredients into a simple type of food,” said Favreau. Similarly, Chef was an independent film shot in less than one month that was elevated by the presence of great actors like Dustin Hoffman, Sofia Vergara, and Robert Downey Jr.

In the film, Favreau’s character, his son, and one of his cooks (played by John Leguizamo) drive a food truck from Miami to Los Angeles. Kleiman asked Favreau if the cast actually drove cross-country.

They filmed on location in Miami, New Orleans, and Austin—as well as in L.A., including at Venice’s “First Friday” food truck event. Favreau originally wanted to write a film he could shoot entirely in Los Angeles on a low enough budget that he could have complete creative control. But the script ended up taking him in more of an Easy Rider direction—which ultimately worked well. “You don’t have the money to build sets or anything,” said Favreau. “But what a beautiful backdrop reality is.”

Choi taught Favreau how to cook—as well as how to move around a grill, what it’s like to work the line in a professional kitchen, and the culture of the restaurant world. Choi took credit for a moment where Leguizamo performs a crude gesture with a freshly delivered baguette. “Every cook does that,” said Choi. He also made sure aprons and towels were worn correctly, kept Favreau’s character from wearing his chef’s jacket to the farmers’ market, and taught the director the proper way to tap a spoon clean.

Most consultants, said Favreau, will create a menu and give tips to the food stylists. But every day there was food being filmed, Choi was on set—and he was cooking.

It wasn’t just the kitchen scenes that rang true for chefs, however. Casper is a divorced dad who has trouble connecting with his young son. It’s something a lot of chefs really relate to when they see the movie, said Choi.

When you’re passionate about your career and it involves long hours, your family often loses, said Favreau, whose parents were divorced. Like Casper and his ex-wife in the movie, Favreau’s parents didn’t argue. But Favreau didn’t understand why they weren’t together—which, he said, “is even more heartbreaking.”

What has the film done so far for these men and their careers and lives?

“It’s given me even more confidence to believe in my gut,” said Choi. As a chef, you live in a walled world; outside the kitchen, there’s a lot of doubt. But with the success of Chef, Choi feels he’s gained the ability to trust other creative sides of himself.

“It changed my life,” said Favreau—including his relationships with his kids and his relationship with food. And he learned, too, about leadership from Choi. “Roy talks to every single person in his kitchen in whatever language they speak,” said Favreau. “He knows their stories.” And yet he’s also the boss, and he takes that responsibility seriously. Seeing the way Choi and his cooks interact “changed my mindfulness,” said Favreau. It’s the kind of relationship and work that “forces you to be present.” 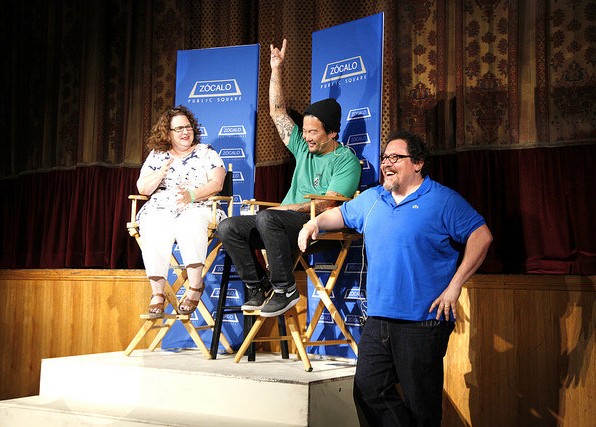 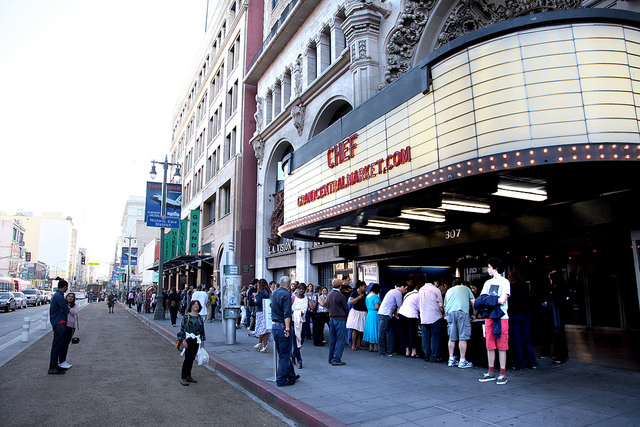 Audience members lined up around the block outside downtown L.A.’s Million Dollar Theatre 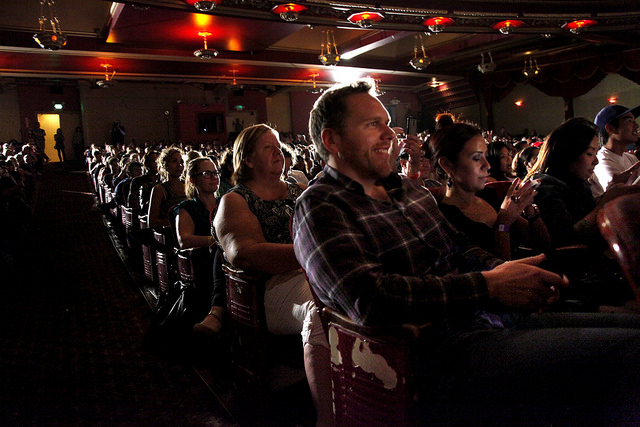 It was a standing-room-only event, with guests filling the ground floor and the balcony 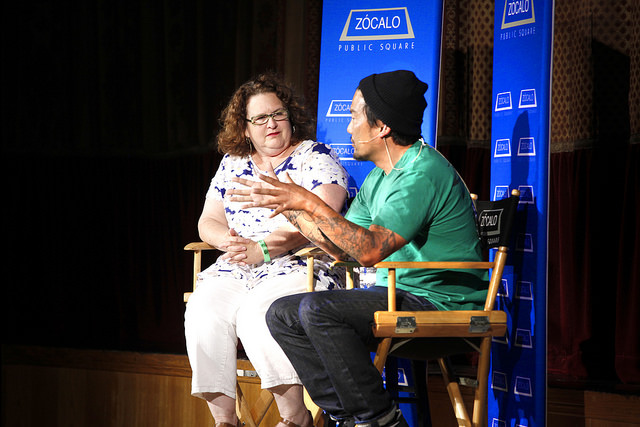 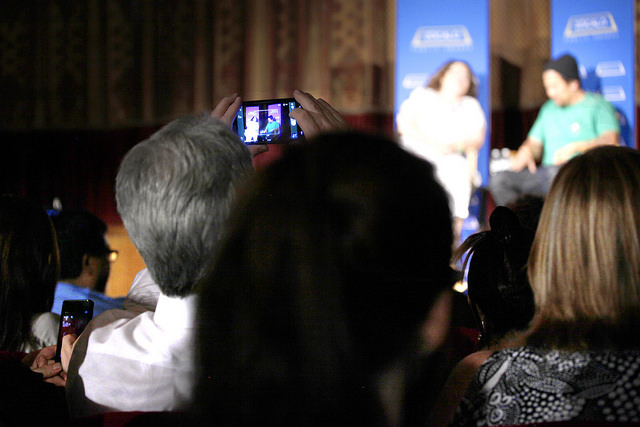 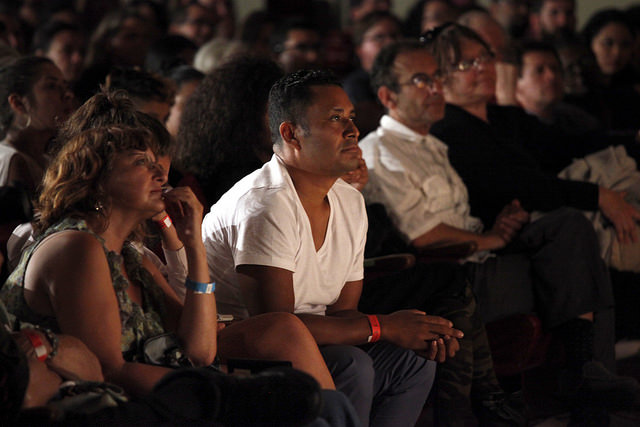