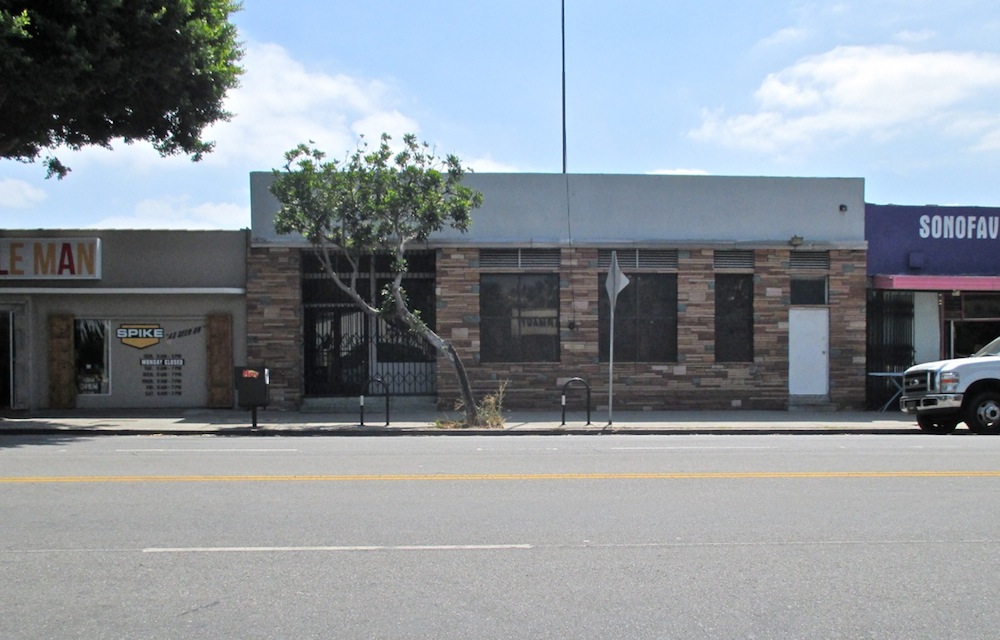 In 2011, after months of arduous searching, I happened upon a listing of a former U.S. Post Office for sale in the El Sereno neighborhood of Los Angeles. At the time, I was possessed with the idea of buying a building to convert into an art studio for my work on abstract drawings and paintings, sculpture installations, and performance-based pieces. My recent studios had been in industrial areas, and that meant fumes from neighboring factories, dirt and debris staining my works on paper, landlords who didn’t fix leaks or crumbling walls, and racing to my car at night on abandoned streets. I fantasized about buying a building where I could find peace and stability.

The post office’s online listing indicated it had the right amount of square feet, was practically empty (no massive demolition—we could tailor it to suit our cranky artist’s needs), was in a commercial area (no more toxic fumes), and came at a reasonable price (under $100 per square foot).

A friend and fellow artist, Deborah Aschheim, who had been griping in studios with me for many years, and my husband Ed Dimendberg, a film studies professor who also writes about architecture, were game to go with me on this potential folly. The listing sounded promising, but would it have the right kind of light, walls, and hard-to-describe feel that we were looking for?

When we went to look, we found a shell of former civil utilitarianism: Mostly empty except for some leftover parking signs, and a meter box with labels for mysterious functions we couldn’t interpret. The black floors turned out to be rubber linoleum, useful for pushing those heavy carts around in a time when there were lots of letters and packages filling them. The back doors were heavy and metal-hinged, the kind that open both ways with rubber skirts at the bottom. One of the running jokes was that we might find Jimmy Hoffa’s body in the storage shed in the back.

The bathroom was actually the only beautiful space in the building: one long, light-filled room with a row of eight urinals, three stalls, and terrazzo floors. We wondered what the women who worked at the post office did when they had to go to the bathroom. There was a separate handicap one, so maybe the more modest females went there.

But although it was hard for us to imagine, there was history in this building. The eyes of our neighbor, Charlie, who helped his father run Tamale Man next door, lit up when I asked him to describe what the post office used to look like. The green terrazzo on the entry stairs trailed all the way inside and up the walls, which were lined with rows of glowing copper P.O. boxes. It sounded like a place of old world grace and sensuous materials.

We were also delighted by the location. It was on a tree-lined part of Eastern Avenue that, serendipitously, I had often passed through on my way to teach classes in Long Beach. I had thought during my drives, “This would be a pleasant area to have a studio in.” There were some schools and parks nearby in addition to the tamale restaurant and small businesses that included an acupuncturist and herb store. And there was a flagpole outside, which I was sure we could put to some interesting use.

But it was the open floor plan that convinced us. We could build out studios for Deborah and me and four tenants, with walls and hallways positioned to fit an artist’s work needs. The 12-foot ceilings were very desirable—great for very large paintings, video projections, and sculpture works. We could put in 8-foot high doors so the work could actually leave once it was made.

After moving in, we did encounter some downsides. We had problems at the beginning with some people who would lounge in the back of the adjacent property and block access on our entry steps in the morning after buying drinks at the liquor store across the street. A few junkies used to shoot up at the back of an empty commercial building two doors down, in view of the young children living in a nearby house. Being the pain in the ass that I am, I called the community police officer a number of times, and these unsavory characters seem to have disappeared, for now. I also periodically go over to the City Council District 14 office in El Sereno to request trash cans and a stoplight for our street.

But, after almost two years happily ensconced in El Sereno, Deborah and I are extremely pleased, as is Ed, who has additional book storage in one of the beautiful bathrooms. The four other tenants are working steadily and sometimes frantically away on abstract paintings, videos, sculptures, drawings, and installations. If we need a break, we can stand out on the back loading dock and see the gentle house-studded hills of El Sereno and, further in the distance, the rugged skyline of the San Gabriel Mountains.

I am also getting to know the neighborhood. In the daytime, I actually see people walking down the street, a contrast to the landscapes around my former studios. A postal worker on delivery rounds struck up a conversation about what we are doing in his former haunt. At 2:30, when schools let out, the teenagers appear, boys shuffling down the sidewalk and groups of girls walking with their heads close together. On Saturday mornings, the church on the corner gets packed, and it’s hard to find street parking, but we make do.

The strongest friendship we’ve made is with the family running Tamale Man, next door. Carlos, the patriarch of the family and Charlie’s father, became a real comfort throughout the process of buying and renovating the building. He generously let our contractor’s workers use the restaurant’s bathroom. And he’d tell us stories about how his mother, Guadalupe, came from Jalisco, Mexico to start a tamale business out of her kitchen. Carlos took the tamales to the street to sell, and in 2003 they moved into their current location. I found out that the restaurant cooked and ground their corn from scratch when one of the other artists in our space, Alise, smelled an overwhelming popcorn scent one night. Since Carlos’ passing, we’ve remained close with the family, looking out for each other.

I never expected to own an old post office in a neighborhood I used to know only through my car window. I now have odd areas of expertise about fire codes and bathroom regulations, and Deborah has wrestled through so much of the paperwork involved in small business financing that she could become a loan consultant. Ed is trying to figure out how to creep into my storage area to wrestle even more space for the books that keep arriving on our doorstep at home. And we certainly get a kick out of telling people we have our own post office.

As for the flagpole, who knows? Maybe we’ll invite other artists to design flags for an exhibition project. Or I might make an enormous flag that says “Complaint Center” on pink stained fabric to fly above the building, as part of an ongoing project where I collect complaints from the public and transform them into drawings and installations.

The flag might elicit a chuckle out of the frantic commuters tearing down Eastern Avenue in their rush to the 710 Freeway. It might give our neighbors a clue about what is going on in their old post office. Or it might make observers even more perplexed—which in the end is not a bad outcome for a building re-purposed for the making of art.