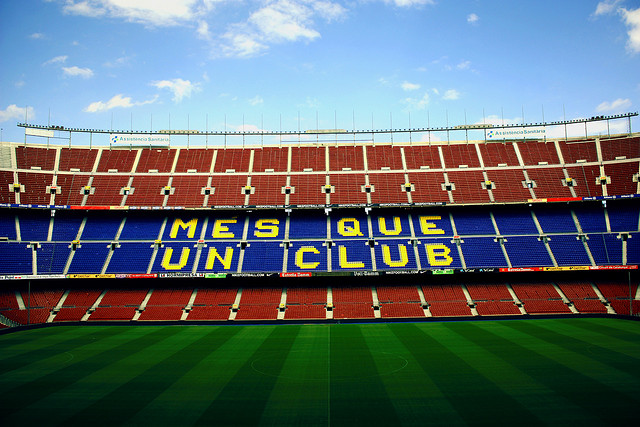 I’ve rooted for you—the Spanish soccer team FC Barcelona, one of the most successful sports franchises in the world, founded in 1899—since I was a kid. And for good reason. Remember your slogan, mes q’un club—“more than a club”? You weren’t supposed to be just about winning, but about playing, and conducting yourself, in a certain way: with artistry, open to the world, and without excess of ego. That is what your more than 160,000 registered member-owners (“Barça” pioneered the communal form of ownership that is common among European soccer clubs, and emulated in American football by the Green Bay Packers) and tens of millions of fans around the world have come to expect.

And you have long been a symbol of cosmopolitan defiance to the more conformist, authoritarian version of soccer (and, well, of Spain) emanating from Madrid. Under Franco, when all other forms of Catalan culture were suppressed, rooting for Barça was the one remaining way of defying the dictator. As Spain transitioned to an open democracy, Barcelona led the way to a more open, mesmerizing game, aided by a generation of Dutch imports led by the long-haired wonder Johan Cruyff. From Madrid’s point of view, it was all very seditious.

This summer, however, something changed. I’d say you broke my heart by signing the Uruguayan striker Luis Suárez away from FC Liverpool for a $108 million transfer fee. Of course, it might be more appropriate to say you bit a chunk out of it, given the man we are talking about. Suárez is now serving a four-month worldwide suspension for biting an Italian defender during a first-round World Cup match. Astonishingly, that was Suárez’s third such incident in recent years. And let’s not even get into accusations that he made racial slurs against an opponent.

On the day of The Bite, my 9-year-old son said, “Well, there goes his chance of being signed by Barcelona.” My son was confident that Barça would never sign a player like that, no matter how talented. But Barça proved him wrong, signing the Uruguayan biter (and the top scorer in England’s Premier League last season) a few weeks later, after he sort of apologized for his perverse behavior, which he’d initially denied.

I feel betrayed, and somewhat ridiculous for having convinced my kid that Barcelona was in a league of its own when it comes to class and character—ashamed to have clung for too long to certain childhood illusions about my sports heroes, or rather about the purity and virtue of an institution. Signing Suárez under these circumstances is the kind of thing—dare I say it? —that our archrival Real Madrid does, not Barcelona.

The Barcelona-Madrid rivalry is one of the more epic rivalries in all sport in part because each time the teams face each other, it amounts to a reprise of the Spanish Civil War. But it is about more than politics. I long believed that to root for Barcelona against hated Real Madrid was akin to rooting for Obi-Wan Kenobi and the rebellion against Darth Vader and the Empire; for humility and teamwork (Messi) against individualism and narcissism (Cristiano Ronaldo); for long-term authenticity (developing your own players over time to fit into your unique system) against success purchased overnight (Madrid’s practice of paying any price for the world’s biggest stars, “galácticos,”once they’ve made it elsewhere).

Now it seems that I’m the outlier. I struggle to imagine the meeting at which Barça executives, acting on behalf of its member-owners, made the decision to acquire Suárez. I’m picturing them gathered in a conference room near the Nou Camp stadium, a Mediterranean breeze wafting in through an open window, when someone chimes in: “We have one of the most beloved and respected brands in world soccer, indeed in all of sports. We have arguably the two best players in the world these days—Argentina’s Lionel Messi and Brazilian star Neymar—and we’re revered by fans everywhere for playing a mesmerizing, fluid, offensive game, featuring talented players (many of them homegrown) who subsume their egos for the collective. Clearly, what we need to do is bring in this guy Suárez, who can’t stop biting opposing players.”

Didn’t anyone around the table suggest that this might be a great way to tarnish—or nuke, more like it—the team’s carefully nurtured identity? I guess not. It doesn’t help that our rivals Real Madrid and Atlético Madrid won championships last year, and we didn’t. Still, even one disappointing season—or Barcelona execs’ self-serving claims that they’re reforming other teams’ villains as a humanitarian mission—doesn’t seem like enough to justify this signing.

I am not naïve, or at least I didn’t think I was. I know that individual sports heroes often disappoint as societal role models, which is why I never buy my son a jersey with any one player’s name on it. But I figured it was safe to believe in a hallowed institution like Barça, that the team as a whole could be safely placed on a pedestal, to be counted on over time to stay true to certain immutable principles, principles that would preclude rewarding someone like Suárez with a five-year contract.

Not that long ago, after all, Barcelona was famous for being the only major European soccer team not to sell its jersey to an advertiser. For a number of seasons, before selling out to the Qataris (the jersey now plugs Qatar Airways), Barça players promoted UNICEF on their chest as part of a program to raise funds for the UN agency’s relief work. This team really did seem different, almost virtuous. And it felt virtuous to root for them, too.

That is the thing about powerful brands (sports or otherwise) that draw your allegiance: to identify with them, to wear the colors and logo, to take a side, is to make a statement about where you stand in the grand scheme of things. It’s about choosing who you want to be. And all virtue be damned in this case: I apparently chose to be duped by a team that pretended to be different.

Now, far beyond the years when anyone should be doing so, I am forced to rethink whom I root for over there, and why. It is a scary prospect, revisiting questions of identity and belonging, and opens up a frightening possibility: becoming one of those lonesome, jaded people who decides there isn’t any team worth rooting for. Let’s hope it doesn’t come to that.