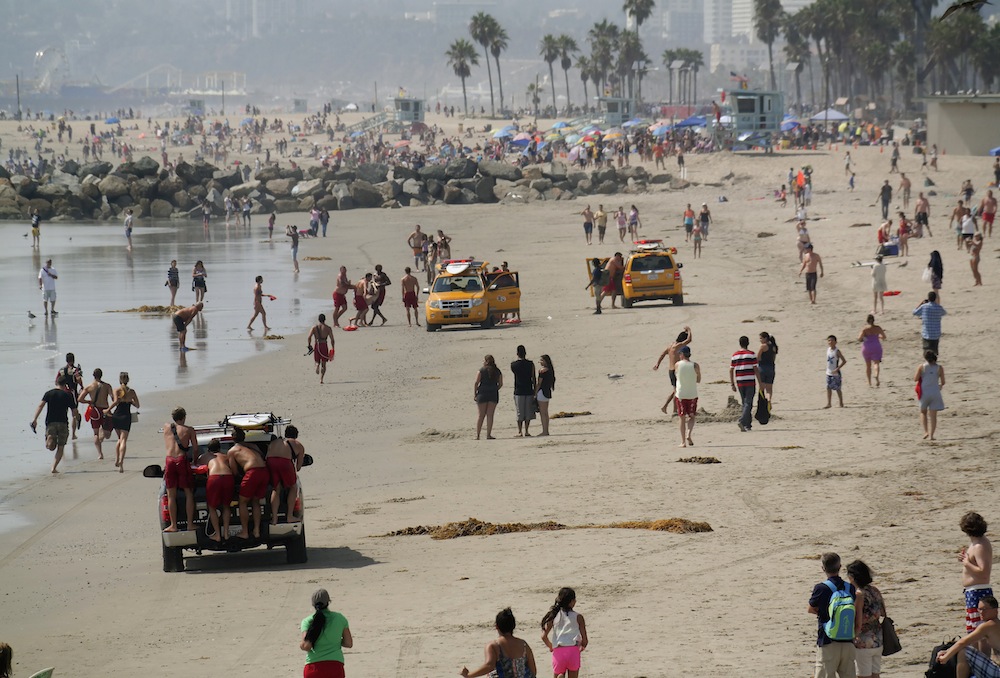 On Sunday afternoon, I was knee-deep in the ocean, right next to the Venice Pier, when the deadly lightning bolt hit the water. This rare bit of weather would kill one person and injure 13 others, making national news. But I didn’t know it right then.

I had gone to the beach with my college roommate Amanda, who flew in from Arizona on Thursday for the weekend. On Sunday, a few hours before her flight home, we finally found time to try the beach, as a brief stop on our way to drop her off at LAX. On the way, we picked up another friend, Sam, who lives on a houseboat in the Marina. Finding parking at the Venice Pier took 20 minutes; after a stop at Starbucks, we had 45 minutes to dip our toes in the sand before heading to the airport.

From the coffee shop, we made our way past packed cafés serving brunch to locals and tourists alike. Before approaching the sand, we slipped off our shoes and walked alongside the Venice Pier until the chilly water was up to our calves. The sky was overcast, and the ocean water was refreshing. I was relaxed and happy as I soaked in the idyllic combination of crisp air, toes in the sand and the company of my closest girlfriends, one from middle school and one from college. I missed this. I grew up taking weekend trips to Perry’s Beach Café with my dad on Sunday mornings, driving up PCH to The Reel Inn in Malibu to eat fish on paper plates, and celebrating birthdays with picnics in Zuma.

Walking in and out of the surf, we shared a beautiful 30 minutes, and stories of ex-boyfriends, college classes, and our mutual struggles to be vegetarian. We were standing in a triangular formation; I was up to my knees in water facing Sam and Amanda. I had been digging a hole in the sand with my feet, burying my ankles in it as water rhythmically filled and emptied it.

Without warning and without a second to look around, an explosion erupted above my head. My heart skipped about 10 beats. An enormous, white light broke the sky above me. A huge roar echoed across the beach, and my body refused to turn around, for fear of seeing that a bomb had gone off around me. I still had my Starbucks coffee and flip-flops in my hands, but those hands had gone numb.

Seconds later, the bright light disappeared, and the thunder was replaced with sounds of chaos on the beach. We ran, out of instinct, to shelter, which was out of the water and under the pier. As Sam and Amanda caught their breath, my attention was focused on my left kneecap, which was tingling. As I reached down to touch it, I became very aware of my hands. The joints in my fingers felt tender, and my hands were suddenly tingling as well.

As I glanced around the beach, trying to make sense of the last 10 seconds, I heard Amanda telling Sam that it was lightning. Amanda told me that the bolt had hit the water directly behind me, just 30 or so feet away. I would later learn, via the Weather Channel, that the lightning strike electrified the water for about 50 yards around it. I had been standing knee-deep in what they called the “hot zone.” My left leg was closest to the deep water, so the shock may have entered through that extremity and exited through my hands.

From under the pier, I watched as dozens and dozens of people poured out of the ocean, sprinting, while others ran into the water to attend to surfers and swimmers who had been struck. The line separating the water from the dry sand was swarming with frazzled men and women. Sunbathers sat up straight. Families with picnics and umbrellas farther up the beach were quickly packing up to head home.

I began to regain sensation in my hands and ignored my tingling knee as we joined the mass exodus from the beach. We walked past the surf shops and restaurants again, this time overhearing conversations between strangers about the lightning. As we climbed into my car, I brushed the sand from my feet, which sent a small but sharp sensation through my ankle. The sand felt more grainy than usual on my fingertips. Perplexed, I gave up cleaning my feet and started the car.

I felt more scattered and anxious than usual, but I had to drive. I dropped Sam off at her boat and took Amanda to LAX. Then, while driving away from the airport, I made the uncharacteristic decision to try to get back to South Pasadena without using any smart navigation apps. I could hardly focus on where I was going and desperately didn’t want a voice coming out of my phone micromanaging my driving, so I got on the freeway and drove straight until I felt like changing lanes.

I read “Norwalk” on a freeway sign, and not knowing where that was, took the exit. I was preoccupied with my own thoughts, replaying the surreal scene of families, couples, and small children running out of the ocean. In that moment of aimless driving, I wanted to go to a bookstore and skim the shelves. No, I wanted to go shopping for workout pants. Shaking my head, I decided I wanted food. I was starving, my arms were suddenly sore, and I wanted to stop driving as soon as possible.

I gave in and turned on Waze for directions to Fresco Community Market, my favorite grocery store. I spent about 45 minutes walking around, forgetting why I was in that aisle, staring at the Greek yogurt choices, walking away and then coming back. I was dazed, but didn’t recognize it. Finally, I bought a loaf of bread, fig jam, and several types of cheeses and drove home. After making myself a grilled sandwich with my new ingredients, the chaotic day melted away as I watched Chopped, the Food Network show, and drank orange juice.

A few minutes after I finished my meal, my parents walked in the door, and I told them about my wild afternoon. I insisted I was fine, and I really thought I was. Once I finished my sandwich, I stood up.

This is when things took a turn. My mother watched me with a close eye as my legs grew weak, and my fingers began to tingle again. Within seconds of standing, I had hardly enough energy to bring my plate into the kitchen and left to lie down in my bedroom.

I lay on my bed and stared at the ceiling. I have a long-standing sensitivity to fluorescent lights in the kitchen. But usually the dizzy feeling brought on by visits to the kitchen goes away within seconds. Not now. My eyes wanted to close, and suddenly my body felt cold. I reached up to itch my neck and froze. I looked down as I ran my finger across my neck. The tingly feeling I had felt in my knee and my fingers earlier that day was spreading. It felt as though there were eight layers of skin between my fingertips and the rest of my body.

The inside of my elbow became achy, and my muscles became sore with every second that my arm was elevated to reach my neck. The nerves throughout my body felt both electrified and numb. I lay very still as I called for my parents to come upstairs. When they arrived, my eyes were glassy, and my shallow breaths came and went quickly. It felt like an electric wave was moving up and down my left leg, across my torso. I squirmed on my bed to try and shift the sensation but it had no effect.

My parents started asking me specific questions, such as where my shoes are, if I remember the names of my medication, and what I ate today. I stared blankly at them and didn’t speak. A few minutes later, I watched as six or seven paramedics walked through my bedroom. A paramedic asked for my name and age; I answered quickly to focus on following the electric current through my body. They took my blood pressure and asked me other questions, to which I murmured answers.

The paramedics said that I seemed fine, medically speaking. But the fatigue was overwhelming, and a loud beep from a paramedic’s walkie-talkie gave me a sudden and raging headache. I tried to explain how I was feeling, but the paramedic interrupted to say that they couldn’t answer specific questions because of liability concerns. The paramedic offered me a ride to a hospital, but I shook my head quickly. If I was in any real danger, I figured I wouldn’t have been able to operate the car as I did after leaving the beach. Within minutes, the paramedics were gone.

The electric wave moving across my body had slowed down since I began dealing with the paramedics. When I awoke and joined my family later that evening, I felt tired, but the tingly sensation had stopped. I contacted Sam and Amanda, who reported no ill effects.

I feel fine today as I recount this. The rare lightning bolt was a surprise to Angelenos, as were the heavy rainstorms earlier in the day. We’re not used to such things. I hadn’t known, on Sunday morning before my trip to the beach, that thunder follows lightning, or that untimely rainstorms are something to worry about. I know now.