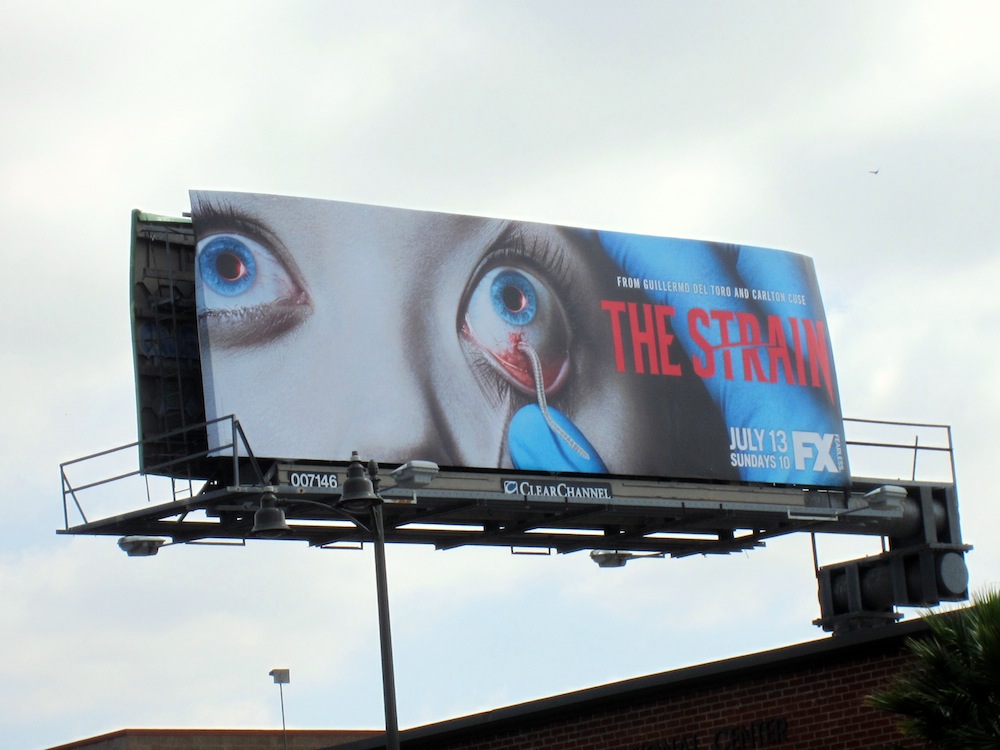 “Mommy?” I look in the rearview mirror at my 6-year-old daughter. Her brow is furrowed and her mouth turned down as she stares at something out the window. “I don’t want to go this way to camp anymore,” she says.

I know exactly what she saw at the corner of Pico and Bundy in West Los Angeles. It’s CBS Outdoor billboard number 14461A, advertising FX’s The Strain. A pair of giant blue eyeballs gaze upwards, held open by a nitrile-gloved hand. At the bottom of the left eye, a silver worm that looks like a sharp hook pokes through the sclera, surrounded by inflamed red blood vessels.

For adults, the image is provocative. For young children, it can be terrifying. A friend told me that her 4-year-old son couldn’t sleep after seeing the image, asking repeatedly, “Mommy, will there be a worm in my eye?” From parents at my daughter’s school, on a parenting listserv, and on Facebook, I heard the same story repeated: “My 9-year-old son told me those billboards completely scare him!” and “My son asked: ‘What is wrong with that person’s eye? Why would anyone do that?’”

The ad created enough uproar to be covered in Entertainment Weekly, AdWeek, and Deadline Hollywood. At the Directors Guild of America premiere of The Strain on July 10, FX CEO John Landgraf addressed the controversy: “We had to terrify some children in order to launch this show, but I think it was worth it. Just saying.”

Guillermo del Toro, co-creator of the series and the book that inspired it, similarly made light of the furor. “Look, honestly, I find every other form of advertising more morally disturbing. Beer commercials, aftershave. This is just a [expletive] worm in the eye!”

After my initial outrage over Landgraf and del Toro’s words, I decided to take them as a serious inquiry: Does the financial success of a TV show justify frightening some children? Is a [expletive] worm in the eye that bad? How do we balance free speech and protecting young kids? And does the public have any rights over the advertising images that fill outdoor space?

The storm over the ads certainly didn’t hurt the profile of The Strain. Jennie Timar, a mom who worked in media advertising, wrote on a parenting listserv: “Bad/negative press is almost as good as positive press for a show, so this will actually probably make people want to watch The Strain.” The show aired on Sunday, July 13, with nearly 3 million viewers, significantly higher than FX’s other recent debuts.

Defenders of the campaign told parents to explain the ads to their children, or tell them to look away. But it is difficult to impossible to un-frighten a young child through explanation. Children under 8 are still working out the boundaries between fantasy and reality.

Many children don’t yet have the verbal and cognitive tools to process their fears through talking. One mom wrote to me through Facebook about her son’s reaction: “Today, as we drove past one, I was watching him in the rearview mirror, and he was clearly disturbed by it. I asked, and he put his head in his lap. Refused to even talk about it. Tonight, finally, he did say: ‘Maybe they should take it down.’”

My daughter, who is less sophisticated than del Toro, is not yet scared by ads for aftershave or beer. By the time my kids are old enough to possibly find them “morally disturbing,” they will be old enough for a rational discussion about them.

The dilemma parents face with outdoor advertising is that we cannot choose whether our children see a billboard or signs plastered on public transportation and transit shelters. I know what my own children can tolerate. I can limit what kind of television and movies my children watch. I can control which magazines they read and websites they visit. But when a bus stops next to us with a disturbing image at my kids’ eye level, I’ve already lost my power to exercise parental discretion.

Movies for general audiences must meet certain standards set by the Motion Picture Association of America. The MPAA’s self-regulation sparks controversy on its own, but nevertheless, films rated G are strictly limited for sex, violence, and language. Additionally, movies are targeted for specific demographics, including children. Parents can boycott films they feel contain inappropriate content and are rated improperly.

It’s uncertain whether the organization that controls billboards—the Outdoor Advertising Association of America—would or could implement a similar system. Parents and children are not consumers, in a traditional sense, of outdoor advertising. We view billboards, but we don’t purchase them. If we avoid them, it doesn’t affect the company’s bottom line.

In theory, billboards that may be offensive to certain constituencies—parents and religious communities, for example—can be kept from their sights if the ads are placed away from schools and places of worship. But people are not static.

So how do parents protest ads with objectionable content?

On June 27, a group of parents succeeded in removing a billboard ad for The Strain near LAX within 24 hours by calling Clear Channel and the City Council. The next day, FX responded to angry calls and tweets and negative press by announcing that ads would be replaced “in several locations.” But the billboard 14461A on my route, and others parents reported to me, stayed up for three more weeks.

During this period, I made multiple calls to the city council and CBS Outdoor, which owns billboard 14461A, as did other parents. Craig Rosato, general sales manager for CBS Outdoor, told me that the company is contractually bound to display copy for a client for a fixed period and cannot immediately pull an ad. The contract does not directly link CBS Outdoor with FX—the promotional buys are handled by intermediary agencies. Going through this chain to get approval to pull an ad takes time, Rosato explained. (Somehow Clear Channel managed a swift response with the billboard ad near LAX.)

State and local governments currently have limited authority when it comes to offensive ads. Fred Sutton, a field deputy for Councilmember Mike Bonin’s office, wrote to a parent with support, but cautioned about First Amendment issues: “We are only allowed to regulate signage within narrow parameters, and the city’s ability to require that the content of a billboard be changed or removed is strictly limited by law.”

Yet commercial speech is less protected than political speech, and the few regulations in place are clearly intended to protect children. Tobacco products have been banned from outdoor advertising nationally since 1999, and the city of Los Angeles code forbids “obscene” content. (“Obscenity” is defined legally as appealing to “prurient interest” or depicting “sexual conduct.”) The California Outdoor Advertising Act and Regulations ban “any picture or illustration of any human figure in such detail as to offend public morals or decency, or any other matter or thing of an obscene, indecent or immoral character.” Many parents—and non-parents—would agree that The Strain ads offend public decency.

Existing laws should be expanded to limit gory and/or violent content, images that are at least as distressing to young minds as sexual ones. One Los Angeles mom has initiated a MoveOn petition calling on the California state legislature to “create more stringent regulation on billboards and other public advertisement.”

The ad at billboard number 14461A finally came down on July 21, a full week after the premiere. My daughter cheered when I gave her the news. But, it’s only a matter of time before another horror movie or TV series needs promotion. I don’t expect media and advertising companies to stop creating edgy, disturbing images. Nor should they. I can handle seeing an image that scares me in a newspaper, a magazine, or on TV during an adult program. I’m a grown-up.

But companies can and should promote their products without terrifying children. I don’t want my 6-year-old daughter to face another nightmare scrawled against the sky.