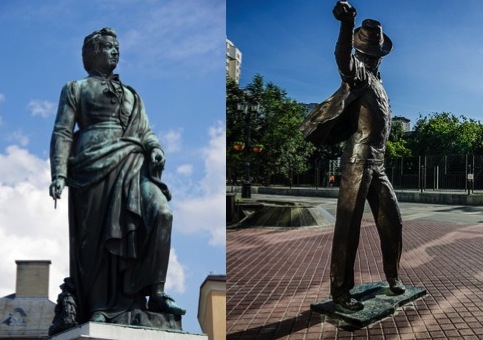 Even as teenagers, John Lennon and Paul McCartney saw themselves as “the next great songwriting team.” Sitting in McCartney’s living room with their guitars, they jotted down ideas in a notebook and labeled each page “A Lennon-McCartney Original.” It might have been youthful hubris—but those lads in Liverpool had the right idea.

There have been a handful of successful creative partnerships like theirs—spectacular ones that earned two people fame and linked their names forever: Marie and Pierre Curie. Richard Rodgers and Oscar Hammerstein. Steve Jobs and Steve Wozniak.

What other sorts of collaborations might have happened? What if brilliant minds and artists throughout history had worked together rather than independently? In advance of Joshua Wolf Shenk’s visit to Zócalo, “Is Collaboration the Secret to Creativity?”, we asked writers: Imagine you have the power to bring together two creative greats (living or dead) to collaborate. Who would you choose and why?

One day in 1949, Julia Child watched Colette stalk across the dining room of the Le Grand Véfour, the 18th-century restaurant in the Palais Royal. The novelist, she learned, came down from her apartment upstairs every day to claim a banquette seat as if it belonged to her.

At 76, Colette was famous as the author of Gigi and Chéri; at 37, Julia Child had not yet thought of writing Mastering the Art of French Cooking. In awe of this monstre sacré as she paraded across the room, Julia later noted in My Life in France: “She avoided our eyes but observed what was on everyone’s plate.”

Now let’s imagine that Colette, approving of what she saw on Julia’s plate, actually acknowledged her. The short, bristling Frenchwoman stared up at the towering American as if she were a giraffe with culinary interests. “Madame,” she inquired, “how is it that you partake of our national treasure, truffles, when you do not have them in your country?”

“For that very reason,” Julia laughed. “They’re costly, but we love them.”

“So do I. If I can’t have too many truffes, I’ll do without. Let me tell you how to cook them.” Julia took notes as the writer spoke with a look of fierce concentration.

“First scrape them carefully, then stew them in a cast-iron pan with bits of browned bacon, salt, pepper, and champagne. The broth smells suspicious, like all good things, and perfumes your apartment. After 20 minutes bring them to the table in their pan and serve the broth in glasses. You need nothing else.”

Julia took her advice. “Truffles, so deliciously musky,” she would write, “became an obsession.” But those who did not live in France had to make do with the canned version, “which give only a hint of their original glory.”

Perhaps Julia’s sense of glorious cuisine (which we misunderstand in simultaneously over- and under-estimating its allure) began that day, over a plate of redolent, well-sauced truffles?

Carolyn Burke is the author of No Regrets, The Life of Edith Piaf; Lee Miller, A Life; and Becoming Modern, The Life of Mina Loy.

I’m imagining it: Miles Davis and Jerry Garcia lounging around my dining table. And for those of you saying That’s impossible!—you’re either too young or too old to remember Miles and his electrified compatriots opening for Jerry’s band, the Grateful Dead, at the Fillmore West in San Francisco on April 12, 1970.

Reunited, the two might reminisce about the release of Miles’ groundbreaking album Bitches Brew shortly before the Fillmore gig. Or about how the Dead felt that spring night rocking their songs “China Cat Sunflower” and “Good Morning Little Schoolgirl.”

I’ll ask Miles what he thinks of contemporary artists like Chris Botti, and he might rasp: “I don’t care if a dude is purple with green breath as long as he can swing.” I might ask Jerry what he thinks of Joe Pass—of the improvised lead line and spontaneous modulations—and I’ll remember Jerry’s old maxim: “If the thunder don’t get you then the lightning will.”

I’ll ask these late artists about their dream collaboration in the place where they live now. I’ll press for “Autumn in New York”—even though Davis famously said he stopped playing ballads because he loved playing ballads. Or maybe they could just do some riff and improv that would suit Jerry. More likely, they’ll just ignore me and pick up their trumpet and guitar. If I said I suspected they were trying to bridge the gap between Jerry’s “Fire on the Mountain” and Miles’ “The Pan Piper,” I think they’d say there is no gap … What they both were seeking was a more “open” concept of playing, an ability to make the audience hear the silences, the notes that aren’t played. Wherever they are, I think they’re playing those silences, still.

Lynne Thompson is the author of two collections of poetry, Beg No Pardon and Start With A Small Guitar. She is the reviews and essays editor for Spillway, a literary journal published in Southern California.

Following on the heels of his first film Citizen Kane, in 1941, Orson Welles was looking for what would come next. He hit upon the idea of tracing the history of jazz over four generations, from its origins in New Orleans to its spread across the globe. Welles based much of his script for The Story of Jazz on the life of trumpeter and singer Louis Armstrong. He placed the jazz phenom on retainer, along with Duke Ellington. Armstrong was to play “Reggie,” a musician who leaves New Orleans to teach at a music conservatory during the Great Depression.

Due to the box office failure of Citizen Kane, studio executives at RKO Pictures refused to support the jazz project, viewing it as too big a box office risk. Instead, Welles used the same technique—a narrative depicting characters across several generations—in his second film, The Magnificent Ambersons.

Rather than give up The Story of Jazz entirely, he opted for a more straightforward telling of Armstrong’s rise from abject poverty to become a world-renowned star. In 1945, Welles visited Armstrong backstage and revived their mutual interest in the project. As a result, Armstrong supplied Welles with a lengthy synopsis of his life. Alas, the film was not meant to be. The treatment fell into lesser hands and was made as the film New Orleans in 1947.

My dream collaboration is to have the two giants in their respective fields, Orson Welles and Louis Armstrong, return to finally complete their great and unrealized collaboration, The Story of Jazz. I have no doubt that this film would be a lasting tribute to the extraordinary talent and artistic vision of both creators, and a gift for generations to come.

Steven Brower is an award-winning designer, author, and educator. He is the director of the Get Your Masters With the Masters MFA program for designers, illustrators, educators, and working professionals at Marywood University in Scranton, Pennsylvania.