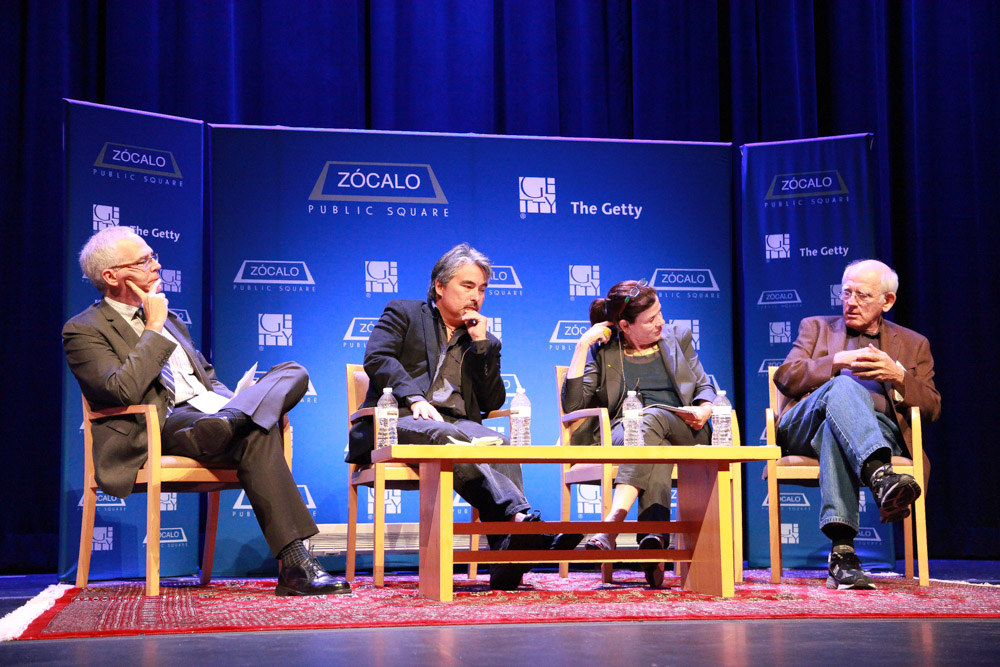 In an age when you can purchase a beach umbrella with solar panels to charge your smartphone, defining a public space—and differentiating it from the digital realm—is complicated. A Zócalo/Getty “Open Art” event at the Getty Museum, presented in conjunction with an exhibition of the Belgian artist James Ensor, explored whether such technology is killing public spaces and changing our relationships to the world around us and to one another.

Robert McGinn, a scholar of science, technology, and society at Stanford University, said that technologies like the solar-powering umbrella lead him to wonder whether physical public spaces are becoming nothing more than “takeoff points” for adventures in cyberspace. People make less eye contact on the street, he’s noticed, and have fewer serendipitous encounters in places like cafés. “I think there’s even the possibility that there’s been a loss of psychic refreshment that can be provided to us by open public spaces like beaches,” he said.

At the same time, the digital age has created new ways for people to come together. McGinn has watched the Metropolitan Opera perform at Lincoln Center live—from a Palo Alto movie theater—thanks to excellent digital technology. Technology can also mass political forces, encouraging people to come together around causes. However, McGinn remains concerned about tools like Google Glass changing public spaces and people’s behavior in public: “I don’t think digital technologies are killing public space, but they are devaluing—or there’s a risk that they’ll devalue—physical public space,” he said.

But what we might perceive today as a battle between the digital and physical worlds might not turn out to be a battle at all, said technology forecaster Alex Soojung-Kim Pang. Twenty years ago, it seemed obvious to cyber-utopians that the Internet was going to win out over reality; 20 years from now, distinguishing between the digital and physical worlds will probably also seem “kind of anachronistic,” said Pang. We imagine ourselves as made of flesh and blood, while technologies are silicon and bits. But for the last 2 million years, our bodies have been shaped by adaptation to new technologies—like eating cooked food and wearing clothing.

John King, the San Francisco Chronicle urban design critic and the evening’s moderator, asked architect Mia Lehrer how a designer of the urban realm navigates this new terrain and creates spaces that are in sync with the technology of today and tomorrow.

Lehrer, the founding principal of Mia Lehrer + Associates, said the key is creating “places and spaces that are flexible.” Also: “trees matter.” Ultimately, however, the digital doesn’t play as large a role as we might think. “We still need shelter, food, water, power, and we need each other, as it turns out,” said Lehrer. But cities do need to change in response to environmental, demographic, and technological shifts. America’s public parks “are still stuck in the age of the typewriter,” she said. In order to make a rapidly urbanizing world more livable, “we do have to think about reimagining all this public infrastructure in a way we can all bike and jog and smell the flowers and enjoy our families and maybe even throw a Frisbee—and potentially take a very important call from a very important person,” she said.

A few hours earlier, King said, he’d walked into a Starbucks, opened his computer, and proceeded to stare at the screen. Is that analogous to, say, someone reading a book at a café 20 years ago—or does it make for a more atomized public sphere?

A computer was designed to be “a weapon of mass distraction,” said Pang—“to capture your attention in as many ways as possible for as long as possible.” It’s not the same thing as reading a book or newspaper. However, even as smartphones and laptops change our behavior, we are also able to “unlearn bad habits” thanks to neuroplasticity. Twitter “literally changes your brain”—but time spent interacting with people can restore it.

In the question-and-answer session, an audience member asked Lehrer whether it’s possible to design spaces and places that stop people from staring at their phones.

“I think it’s going to be a matter of time,” said Lehrer. People are going to understand how to use their devices and develop discipline about their use. But it might take awhile.

Does it even make sense, asked another audience member, to talk about the private versus the public sphere in a time when technology is everywhere?

“Privacy has not disappeared,” said Pang. “The capacity of bad actors to violate your privacy has exploded.”

Are people feeling less ownership over public spaces as a result of technology?

No, said Lehrer. She thinks people feel more engaged and participate more in community life thanks to the opportunities for connection and communication afforded by the Internet. She sees people creating communities—around geography, issues, and interests. You may not know your neighbors, but in one way or another, you’ve had conversations with them. “That’s my experience,” she said. 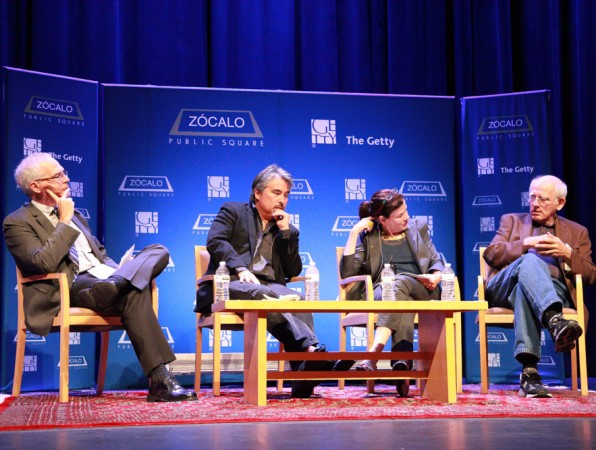 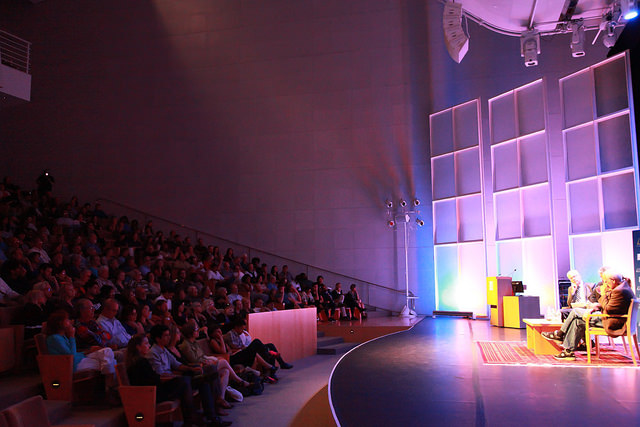 The crowd at the Harold M. Williams Auditorium at the Getty Museum 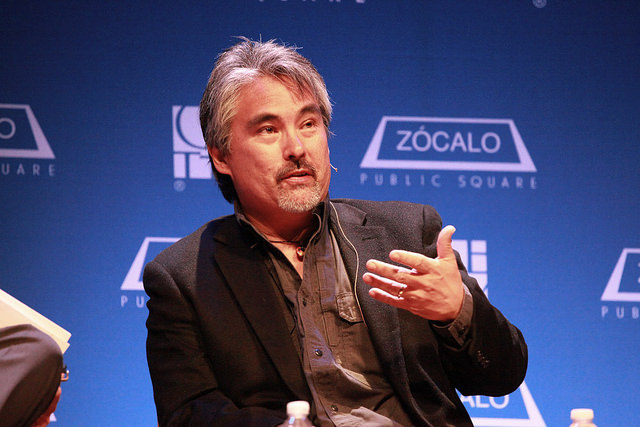 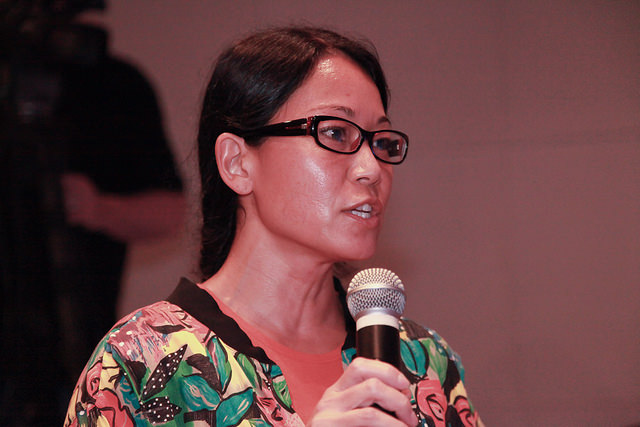 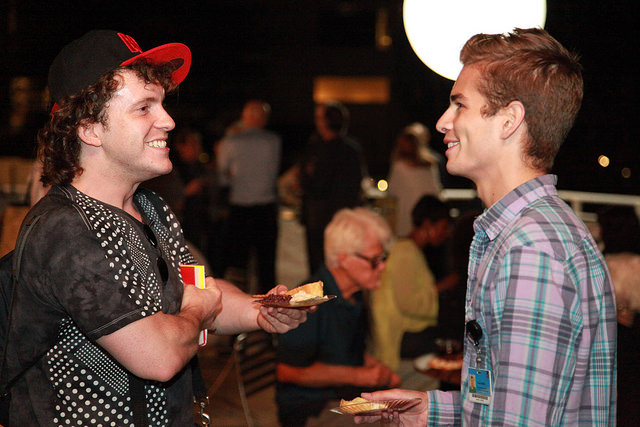 Guests chat at the post-event reception 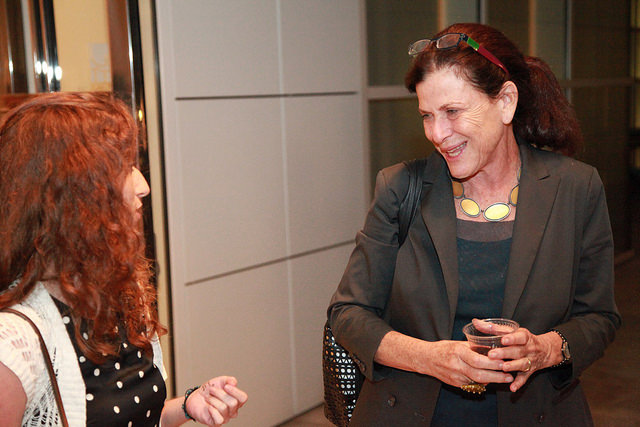