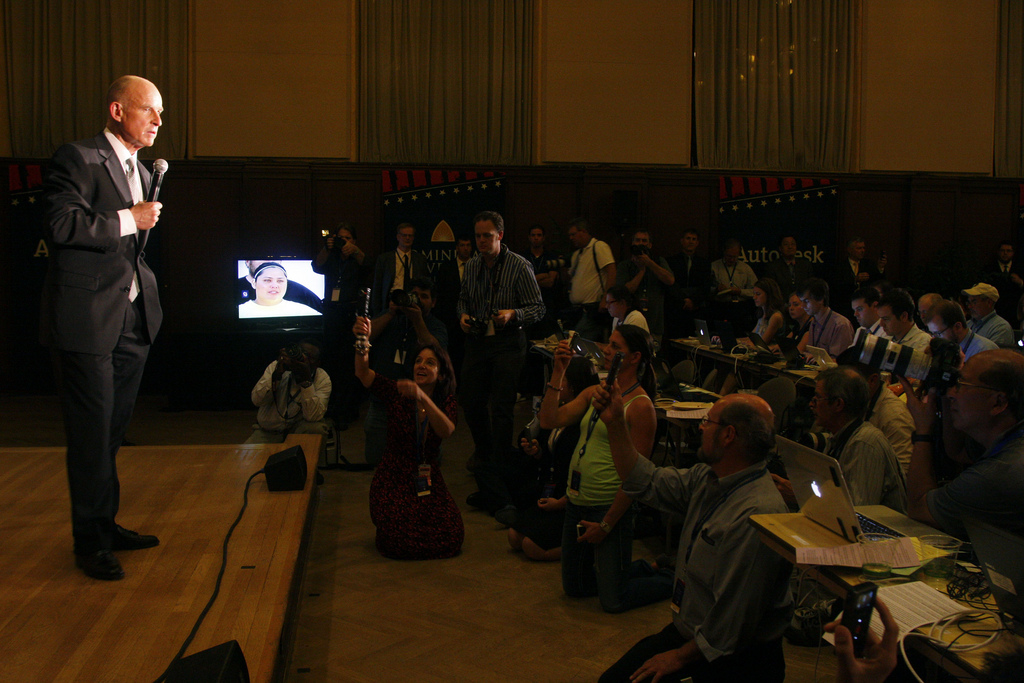 Did we just watch the last California gubernatorial debate–ever?

Trick question. It appears very few of us bothered to watch last week’s debate between Governor Jerry Brown and challenger Neel Kashkari. If this proves to be the last such debate–a real possibility since there was almost no debate this year–most Californians wouldn’t notice the event’s demise.

We shouldn’t be proud of this state of affairs. Yes, it is perfectly fine for Californians not to follow state politics closely; the world is full of more important things, and there hasn’t been a close governor’s race in 24 years. But a gubernatorial debate ought to offer a moment that is an exception to our inattention. A well-designed public conversation between the candidates could offer our sprawling and splintered state a chance to think about itself as a whole. We’re missing a rare opportunity for California citizens to consider what is most important in our shared civic life, and in preparing for our future.

The structure of most political debates, not to mention the realities of our lives, don’t allow for such a moment. I write about California for a living, and even I had little interest in this debate. I entered Thursday evening, a busy night in the week for our family and many others, with no firm plan as to how I would watch. My wife was out of town for work, and I had to juggle three children–retrieve one from the doctor, go home to pick up the baby, then meet my parents, who had the third kid, for dinner.

In the car on the way over to my parents’, my two boys in the backseat, I turned the radio to the NFL season opener, but it was halftime. So I searched the dial for the debate, landing on public radio just as Brown and Kashkari made their opening statements.

I immediately wondered if I should switch back to football. The early conversation focused not on California but on the polls and who might win–a pointless conversation given the lack of suspense around the election’s outcome. When Governor Brown said that Kashkari didn’t stand a chance, the challenger didn’t bother to dispute the premise.

It was striking how the two men struggled to talk fast enough to fit the short time periods: 90 seconds for responses, 30 seconds for rebuttals. How could anyone learn much of anything from this? Twelve minutes later, we reached my parents’ house. Curious to know if the debate looked any better than it sounded, I turned on their TV and clicked through the network affiliates. Only KVEA, the Telemundo station, was airing it.

In whatever language, it was hard not to notice the contrast in ages: an elderly white man, 76, and an Indian-American (who calls himself a “brown kid”) with a shaved head who just a few years ago was on People’s list of the “sexiest men alive.” Kashkari is 35 years Brown’s junior, and, in a first for a major party nominee for governor, younger than me (by four months). They represent two types familiar to Californians. There’s the old guy who is wise but a bit too schooled in the limits and disappointments of the world, and thus a couple measures too patient. And then there’s the young guy who says he has a killer app to transform the world, which sounds great, except you can’t understand how the app is supposed to work.

Brown is the state’s brilliant if daffy great-uncle, a guy you don’t really know but your grandparents and parents had strong opinions about. His longevity is a gift to California, because it connects us across generations. My parents, who are both journalists, love to reminisce about covering the 1966 gubernatorial race, between Ronald Reagan and Brown’s father Pat, for the college newspaper where they met. My mom, who is seldom wrong, likes to mention that my dad predicted back then that Brown would win, because Californians would never elect a movie star as governor. My parents got married the next year.

After a few minutes, I grew frustrated with the Spanish translation; Kashkari was dubbed by a loud, grating voice. So I pulled out my computer to look for a live stream in English. I found it on the California Channel, which typically broadcasts the state legislature. Finally able to both hear the debate in my own language and watch it, I grew more frustrated.

At one point, after Brown attempted an answer to the complicated question of what to do about water and the California Delta, one of the questioners turned to the challenger and said: “Mr. Kashkari, 30 seconds on water.” Thirty seconds on water? It would take 30 minutes to explain the Delta, much less the array of serious water issues confronting the state.

The format cheated us, because the combatants have things to say that we should hear. Brown understands California as well as anyone alive and could explain its complicated challenges—with some time. Kashkari has a fairly detailed platform that he deserves time to explain.

Instead, they had just enough time for banal sound bites: Brown kept saying California has “momentum” (fact check: so does almost anything going downhill). Kashkari kept talking about “civil rights” and “jobs” without explaining how he would guarantee either. And then each impugned the other’s motives, dialing up the sort of phony outrage upon which modern American politics is based. Brown kept saying Kashkari is a Wall Street banker (he’s actually a guy who has had trouble sticking to one career), and Kashkari kept mentioning Brown’s powerful family and powerful union backers.

After the debate, pundits, citing these personal exchanges, claimed that they showed differences between the candidates. In fact, the opposite is true. Such attacks result from the absence of significant differences between them, or among the media and government elites of California. The debate was striking for its substantive agreements–on the need for more school spending, more infrastructure, and more action against climate change, as well as for same-sex marriage and driver’s licenses for undocumented immigrants. Disagreement was limited to prosaic issues: the cost of high-speed rail, the methods of processing Central American refugees, and a ban on plastic grocery bags.

The debate was billed as hour-long, but it was really a psychiatrist’s hour, 50 minutes. That’s about 78 seconds of conversation for every million Californians, less than a minute for each of the state’s 58 counties.

Why do we persist in holding debates like this? It’s especially maddening when you consider that our state is full of technologists revolutionizing how we communicate. Why not take the debates away from the media companies, who aren’t drawing audiences for them, and turn them over to universities or nonprofits with expertise in technology, communication, and civic engagement? Even a minor updating–let each candidate offer a PowerPoint of her plans, while the other is permitted to interrupt intermittently with questions and comments–would be a huge improvement.

But powerful media and political people are accustomed to the current format, and so it may live on, zombie-like, for a few more elections. Next time, however, like nearly all my fellow Californians, I won’t be watching. A debate like last week’s, no matter how it’s broadcast, isn’t worth our time.