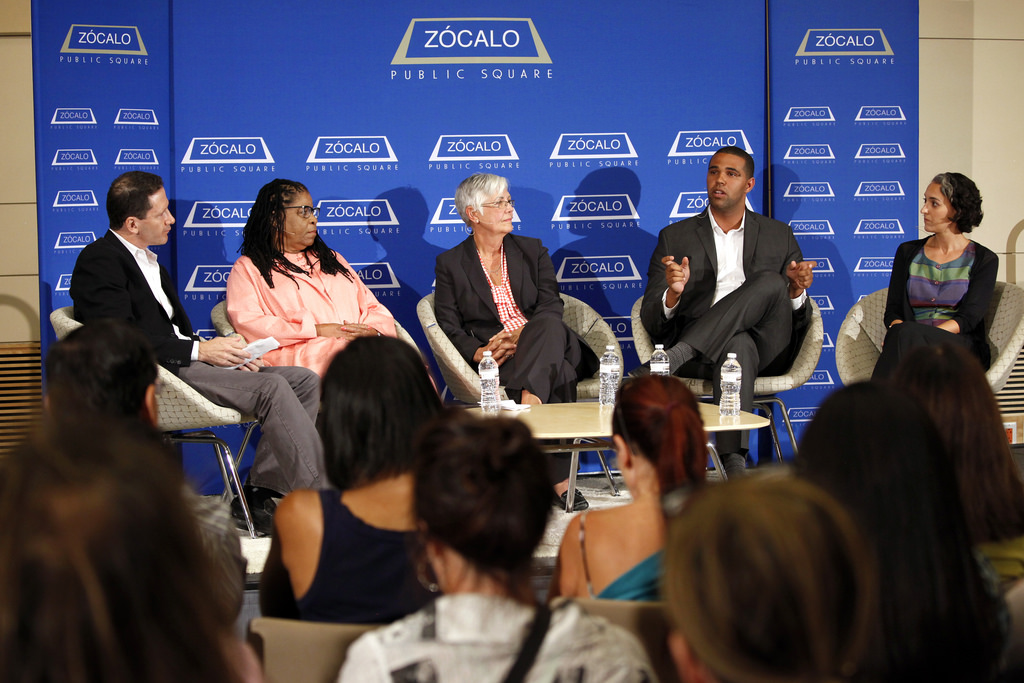 Should we be optimistic about the criminal justice and prison systems in America? This was the question Tim Golden, The Marshall Project’s managing editor for investigations and news, posed to open a Zócalo/California Endowment panel he was moderating. Golden prefaced the question by sharing some news with a standing-room-only crowd at the Endowment’s downtown L.A. headquarters: This year, the number of Americans in prison increased after three straight years of decline. Has the country truly turned a corner after three decades of rising incarceration rates?

Prophet Walker, who helped create a Youthful Offender Pilot Program in California prisons and spent time in prison as a young man, said that of course we want to see constantly declining numbers. And he feels optimistic about a number of new policy changes and discussions, including around the “two strikes law.” A second-time offender currently receives double the sentence as a first-time offender, but California is talking about changing that now.

Jeanne Woodford, the former director of the California Department of Corrections and warden of San Quentin Prison, said that we’re seeing good news out of a number of states, including New York, where sentencing reforms are causing incarceration rates to decrease. Lowering the number of people in prison is an incremental process. “We’re just chipping away at it,” she said. “I think we’re still heading in the right direction.”

Susan Burton, founder of the re-entry organization A New Way of Life, spent time in the system herself and said that Americans have come to realize that it’s necessary to change our prison system. “It’s not working, it’s broken, it’s too costly, it’s taken lives that could be handled differently,” she said. It’s a matter of the system itself catching up to this public sentiment, and the policies changing as well.

Keramet Reiter, a UC Irvine criminologist, cautioned that it’s important to take a long view. In 1980, a few hundred thousand people were in prison; today, over 1.5 million Americans are in prison. An increase of a few thousand people in one year is nothing like the 1980s, when tens of thousands more people were going to prison each year.

A reason for optimism in California, said Burton, is Proposition 47, a measure on November’s ballot that lowers the amount of time people spend in prison for nonviolent offenses and makes people who went to prison for those offenses eligible for expungement after release. Twenty years after her release from prison, Burton would at last be able to clean up her record.

Why, asked Golden, has the discussion and politics around prison reform shifted?

“The power of story is being utilized a lot more effectively these days,” said Walker—and narratives of people leaving prison successfully rehabilitated have been reaching the public. We are seeing a transition from “being tough on crime” to “being smart on crime.” Yet in California, the corrections budget still outstrips the budget for higher education by billions of dollars.

Woodford added that new research is also encouraging a shift in public opinion. “People didn’t understand the collateral consequences of putting people in prison,” she said—from increasing the burden on the foster care system to the growth of gangs.

“We release people from prison without a plan,” said Woodford. Prisoners are released from county jails in the middle of the night, when no services are open, for example.

“When people come home they need an exit plan,” said Burton. They need a place “to just detox the whole prison experience.” And they need space and time to figure out what to do next with their lives.

But getting money for re-entry programs is difficult. Golden said that a prison warden recently told him that if he received discretionary money, he’d spend it outside of the prison system—on re-entry programs.

Reiter said that there’s a prejudice against preparing prisoners for life beyond bars. She’s taught in prisons and has been asked many times why she’s providing higher education services to people who broke the law rather than to college students paying to be in her classroom. Her answer: “Do you see how expensive it is to take care of these people in prison as opposed to in a college classroom?”

Walker said that he was released from prison with $200 and told to forge a new life after being incarcerated from 16 to 22. Just getting a social security card and driver’s license was hugely difficult. Why isn’t that done in the last few weeks before people are released from prison?

One way of addressing the gap in rehabilitation and re-entry services could also solve another big problem in decreasing the number of people in U.S. prisons: job loss. A smaller prison system means fewer guards and administrative staff. How do we utilize that population? Walker suggested that shifting these people to jobs in social work, health, and education could help prisoners and corrections employees alike.

The panel was fairly optimistic about public sentiment and dialogue around the prison system. Golden challenged them to talk about the possibility of backlash.

Reiter said that we don’t yet know if decreasing the number of people in California’s prisons is increasing crime rates—and in any case, “we’re bad at understanding why crime goes up.” But if even one person who’s been released from prison commits a crime, there’s a potential for backlash. Reiter pointed to Willie Horton, who committed murder while out of prison on furlough in Massachusetts—and managed to torpedo Michael Dukakis’ presidential campaign. We can’t expect to get it perfect, she said, and we need to be willing to accept some error. Unfortunately, one horrible crime is “more memorable than the thousands of people who came out [of prison] and did really well.” We need to tell better stories of those who succeed.

Walker said that the narrative of what it is for someone to commit a crime needs to change as well. “When I was 16 I committed a crime,” he said, “but I wasn’t a criminal.”

Both Woodford and Reiter said that transparency and more information can provide useful counter-narratives—data about what policies work and what don’t.

In the question-and-answer session, an audience member asked the panel to address incarceration and civil rights—a subject that hadn’t yet been touched on.

“Race is driving this,” said Burton. She likened the prison system to modern-day slavery—and cautioned against removing this figure from the equation. 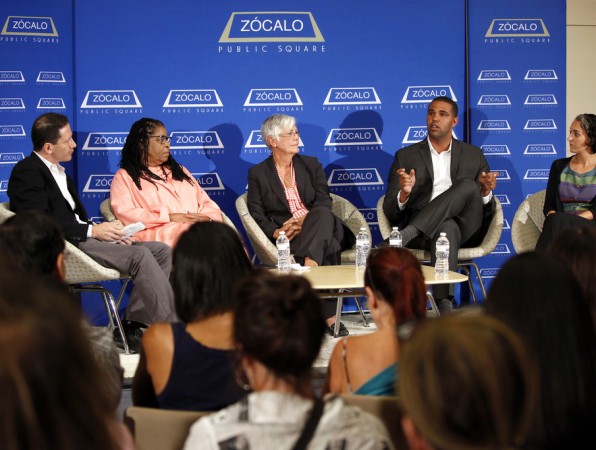 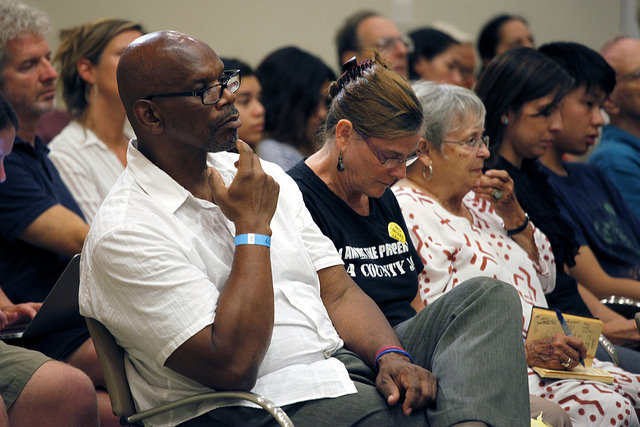 A full house was in attendance 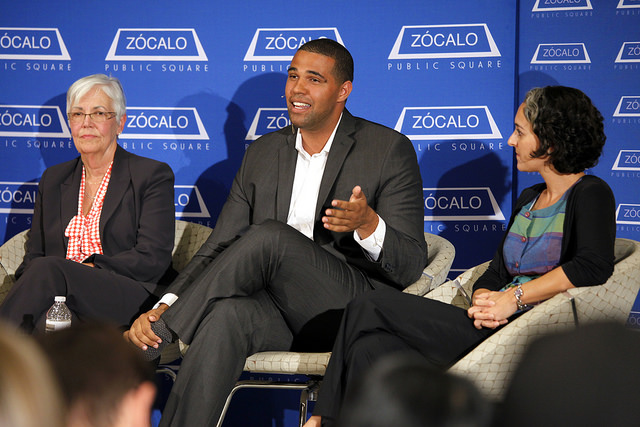 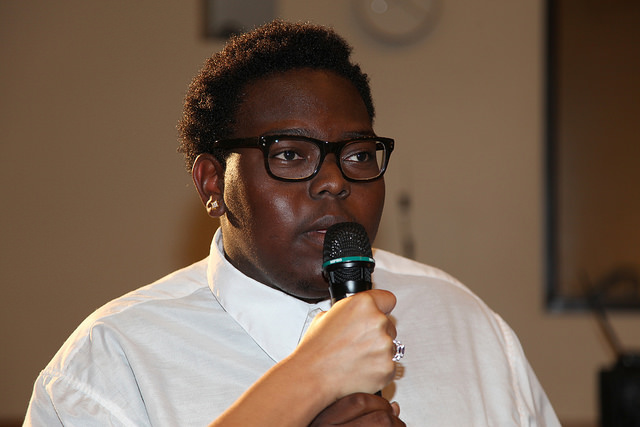 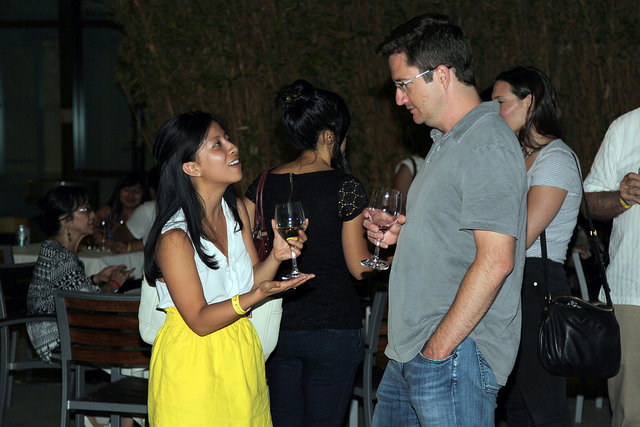 Chatting at the post-game reception 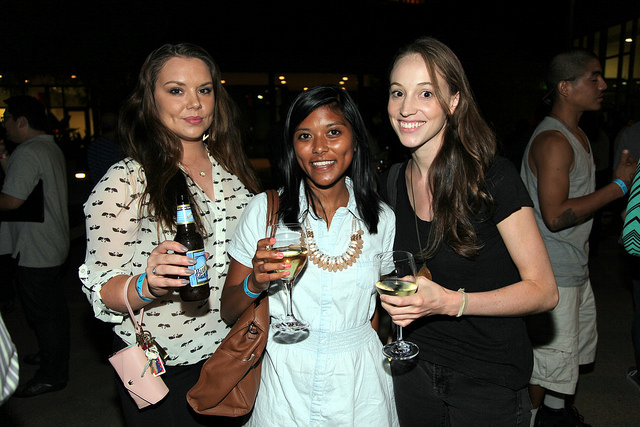