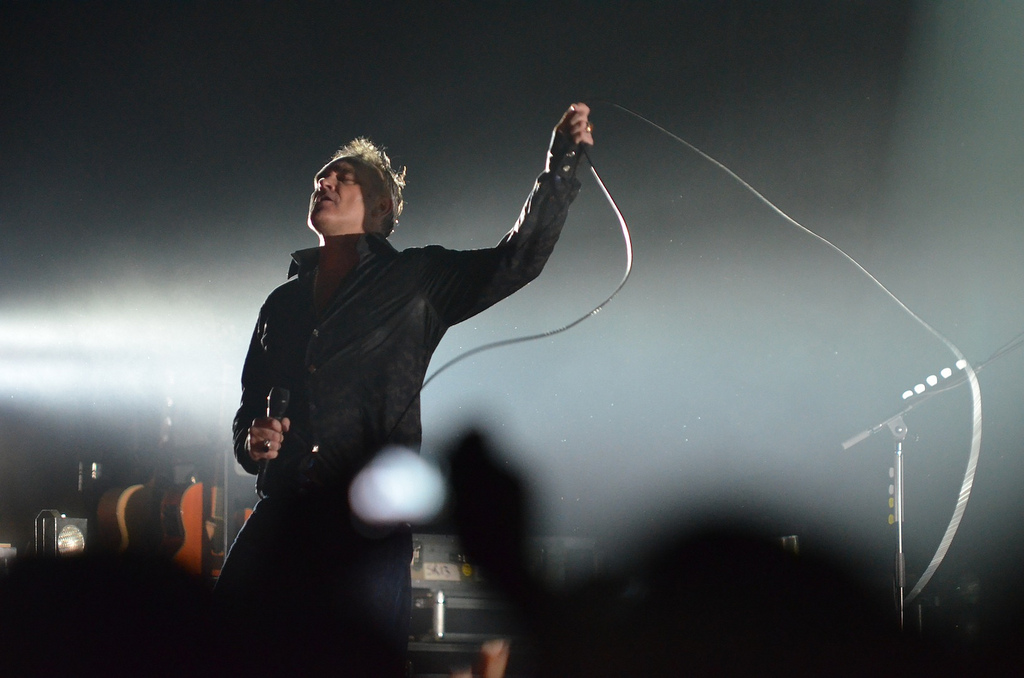 My lifelong devotion to punk rock started with my first backyard gig in Boyle Heights at age 12, which eventually led to me playing guitar in the band Bad Influence a couple of years later.

In those days, one band in particular resonated with me and many other kids in East Los Angeles: The Misfits. Horror-themed fast music with lyrics about zombies and ghouls that was easy to sing along to and play on your guitar? Sign me up. There was just something about that eerie “Crimson Skull” silhouette that stood out. Was it the similarities to the calaveras–those big-eyed cartoon skulls with tattoo-like decorations all over their faces–that l grew up with every November on Dia de Los Muertos? Who knows? But it definitely looked cool as hell on a black T-shirt or sewn on the back of a studded denim vest.

Which brings me to another musical phenomenon that is as embedded in the Mexican-American culture of East Los Angeles as bean and cheese burritos: Morrissey, lead singer of The Smiths, an English rock band that established a cult following in the 1980s.

Morrissey’s extremely melancholy ballads have been the theme music for breakups and lost love for decades. Songs like “Suedehead” and “The More You Ignore Me, The Closer I Get” appealed to the angst of young people, especially those who live in L.A.’s Eastside communities.

Eastside Luv, a bar in Boyle Heights, hosts a free monthly Morrissey-themed karaoke night called MorrisseyOKE, where dozens of depressed Mexican-Americans sing Morrissey’s classics until they get kicked out of the bar. Echo Park’s popular Part Time Punks club hosts a quarterly Morrissey night. I just learned about a brand new Morrissey-themed night at the Melody Lounge in Chinatown. There is even an annual Morrissey convention hosted by the local alternative radio station KROQ. Los Angeles has two serious Morrissey/The Smiths tribute bands—Sweet and Tender Hooligans and These Handsome Devils—both of which have at least one lead Latino musician.

What is the appeal of Morrissey (or “Moz”)? The question has intrigued me since I first discovered punk rock, and found that behind every dude wearing a Crimson Skull shirt, there always seemed to be an older brother with a goatee, a Dickies jacket, and a Morrissey bumper sticker on his car. Hell, every other friend at my high school graduation (happiest day of my damn life, like an escape from Alcatraz), and my first couple of girlfriends, were “Level 10” Morrissey fans.

So–with help from Nancy Marie Arteaga, a former diehard Moz fan–I found three major Morrissey fans and asked them about the Moz-Latino phenomena. Some of these people have built their lives around him and traveled all over the world for his concerts.

Vivian Guerrero, 34, has attended approximately 150 of his concerts and has his signature tattooed on her arm. She describes his music as “ranchera-esque” for its similarity to Mexican folk music of the early 20th century. Those songs are about lost love and “this person left me” and “the one that doesn’t want me.” You know, she told me, the stuff that grown Mexican men drink and cry out loud about at every family gathering. In other words, Morrissey’s music is an English version of the melancholic music that my parents and the parents of many other millennials in East L.A. grew up listening to.

I had never thought about these points but they made so much sense. I grew up falling asleep to the loud-ass live tamborazo groups that played all of my family parties–only to wake up when an uncle had a few too many Bud Lights, and started to sing along, and let the tears flow wild. Wouldn’t you know it? Morrissey was pretty much the British version of Vicente Fernández.

Guerrero can pinpoint the moment that Morrissey started catering to his huge Mexican fan base. It was in 1999 to be exact, when he released Oye Esteban, a DVD collection of his music videos. During a tour with the same name, he was actually quoted as saying: “I wish I were Mexican.” Furthermore, in some of his songs, he explores two essential subjects–the sense of cultural belonging and longing for the motherland–that many Mexican-Americans contemplate at some point in their coming of age. His song “Mexico” takes on white privilege: “It seems if you’re rich and you’re white you’ll be all right / I just don’t see why this should be so.”

I know my dueling American and Mexican identities certainly did a number on me growing up in terms of my anxiety levels and personality. I’ve been lucky enough to cope with my culture clash issues as a budding and nationally published writer who came out of poverty in East Los Angeles. Nonetheless, I quickly realized how insanely easy it was to get pigeonholed as a Latino writer. I wanted to be the best writer in the whole wide world … not just in the brown world, dammit! Maybe I should have given Moz a chance back then to help me with my frustrations. He seems to know a lot about alienation.

Guerrero connected me with her good friend in Mexico, José de Jesús Valderrama, a 36-year-old doctor in León, Guanajuato who has seen Morrissey perform 43 times around the world. He considers himself very lucky to be alive at the same time as Morrissey. He believes that the reason so many Mexicans are obsessed with Morrissey has something to do with having grown up heavily oppressed by their government, Catholicism, and unwavering machismo patriarchal standards. “It’s mesmerizing to watch such a grandiose male artist express intensely emotional sentiments with such ease and detachment,” said Valderrama. “In my case, Morrissey is a force that inspires me to face the day to day.”

I immediately thought about my dad, who is as brashly macho as they come. He grew up in the streets and was constantly hassled by corrupt Mexican cops in Zacatecas and then by border control in the U.S. the first couple of times he tried immigrating here in the 1950s. He was a devout donation-giving Catholic his entire life–until I introduced him to meditation and Buddhism, that is. I’m pretty sure he sees Buddhism as just an extension of traditional Mexican curandero spiritual beliefs. I wonder what he would think of Morrissey’s “Suedehead” lyrics if I translated them into Spanish?

Why do you come here?
And why do you hang around?
I’m soooo soooorry.

Back in Boyle Heights, the Morrissey phenomena fascinated Robert Zardaneta, the 39-year-old director of Youthbuild Boyle Heights, an alternative charter school for students who don’t fit into the mainstream academic regimen of Roosevelt High School a couple blocks away. It interested him so much that he created an elective class, “Arts, a Reflection of Society” with a focus on Morrissey. The class starts off with Zardaneta reading the lyrics to Morrissey’s “The First of the Gang to Die” to his class, which tends to be filled with young men and women who are active or who were active in local Boyle Heights gangs or graffiti crews. “A lot of kids started out saying that it was cool and thinking that these lyrics belonged to a hip hop song,” he told me. “Only for all of them to have a ‘what the …?’ expression when I showed them Morrissey’s face.”

Zardaneta explained how he got into Morrissey as a teenager growing up in L.A. in the ’80s. “Morrissey is easy and cheap to pull off. All you need is some faded jeans and pomade and you’re set,” he said. “You listened to Metallica and you felt tough, NWA and you felt hard, Bobby Brown and you felt like a playa. Morrissey was more introspective, made it OK to feel awkward. Which is worth a lot when you’re in that coming-of age phase.”

As for me? Well, I’ve never been able to relate to Morrissey at all. His music just isn’t fast enough for me.