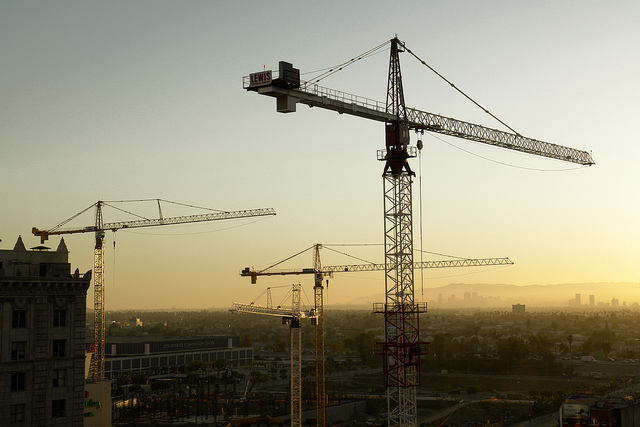 I fell in love with downtown Los Angeles on a warm summer night in 2004. I had parked my car on 7th Street and Grand Avenue, where the restaurant and patisserie Bottega Louie opened five years later. But that night, there was nothing there and not a single soul walking around at 9pm. It was dead quiet on the streets. Still, I saw the amazing bones of a real urban center. In that moment, I decided to get involved somehow with helping to turn downtown into L.A.’s vibrant urban center.

A year later, I moved downtown–to the Pegasus Apartments on Flower Street and Wilshire Boulevard–and started working for the Downtown Center Business Improvement District. It was my dream job: focusing on bringing businesses and residents to downtown. And I was so excited to live there, even though there wasn’t a grocery store downtown until Ralphs Fresh Fare opened in July 2007.

I’ve always loved cities. I think my love of urbanism is genetic, a trait that my father, who lives in Taipei, passed down to me. (He also named me after the school in Utah where he was getting his Ph.D. when I was born–Brigham Young University–though we’re not Mormon!)

I grew up in Monterey Park, so downtown L.A. was practically in my backyard. On a school field trip to Little Tokyo in seventh grade, I had my friend take a picture of me with the downtown skyline in the background. I just loved skyscrapers. When I was a student at UC Berkeley, I went to San Francisco every chance I got. In 2003, I took a trip to New York City that cemented my love for all things urban. I knew I wanted to live somewhere with that energy and vibrant city life.

The revitalization of New York City is an example of “urban done right”–and how a city can be an amazing place to live, work, and play. A decade ago, the future of downtown L.A. seemed so unknown. We wanted it to become a center where Angelenos could gather, shop, play, work, and live. But most people couldn’t have imagined the downtown that exists today.

A great example, and one of the most memorable projects I worked on with the Downtown Center Business Improvement District, is L.A. Live, the sports and entertainment district completed in 2007. The spot where it now stands was once a huge, lifeless surface parking lot across from Staples Center. Now it’s an amazing piece of the downtown puzzle: a place where people go to see music or sports, to eat, to go bowling, or to watch a movie.

In the years that I’ve been working and living downtown, there has been so much revitalization, from Grand Park to Grand Central Market. The next big projects I am excited about are the Bloc and the Broadway Trade Center, which are both game changers for in their respective downtown neighborhoods, bringing new retail, restaurants, and jobs back to the center of Los Angeles. I think people were tired of living in the suburbs and being stuck in in their cars in traffic. I also think Angelenos were tired of people in other cities picking on L.A. as not being a “real city” but a huge sprawling suburban wasteland.

We still have problems downtown, including homelessness. It is inhumane for people to live the way they do on our streets, especially on Skid Row. Downtown L.A. is full of homeless people with serious mental health issues and the situation cannot continue indefinitely. The city of L.A has started looking at this issue and finally taking it more head-on with the proposal of hiring a “homeless czar.” My view is that we need to decentralize Skid Row by not concentrating all of the homeless facilities into one small area; this is a problem for all of L.A. County to address, not just downtown.

If urban revitalization can happen in downtown L.A., it can happen almost anywhere. We have faced and overcome tremendous challenges. Downtown L.A. was completely forgotten, but now Angelenos are coming back to the city. Downtown is in fierce competition for people and money with so many other smaller centers in the city, yet it continues to grow and become more vibrant. It really proves the old cliché: “If you build it they will come!”