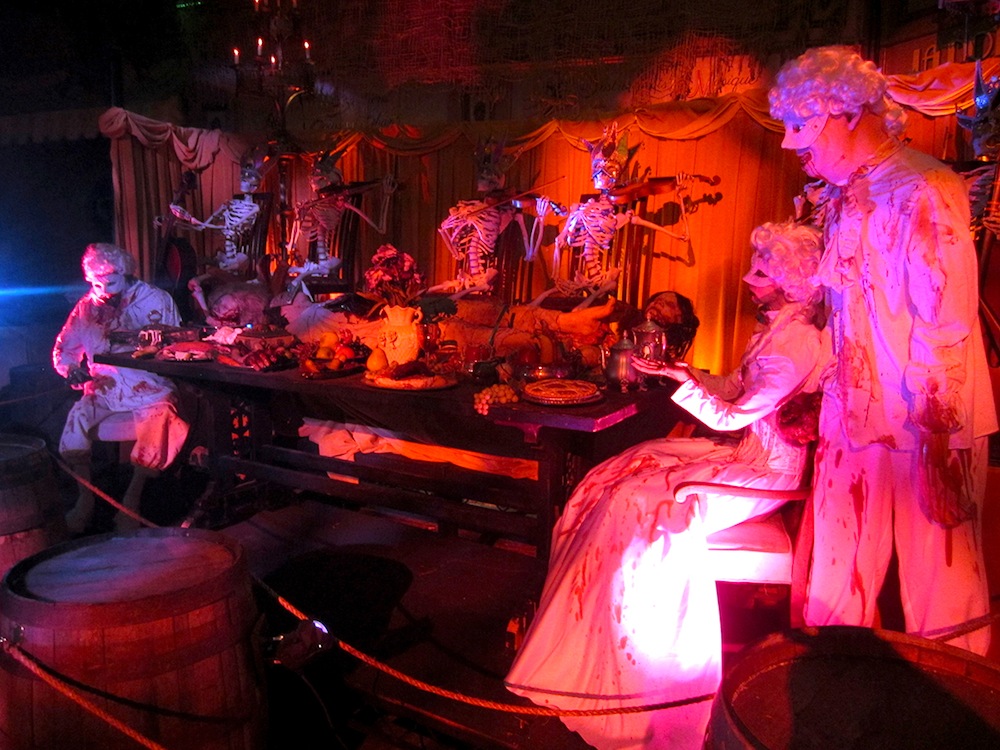 I always knew that writing and visual arts would be unpredictable career paths. But I’ve discovered that there is one thing that I can always count on: dead bodies.

As the art director for the “Scare Zones” at Universal Studios Hollywood’s Halloween Horror Nights, I oversee the zombies and ghouls that overtake sections of the park every October. I was just 18 when I started working at Universal. In the fall of 1980, I graduated from high school in the Highland Park neighborhood of Los Angeles and was trying to find a job. My sister heard the theme park was hiring so I went in for an interview. Later that same day, I was being fitted for a costume for a full-time job playing the Phantom of the Opera.

It was a perfect job for me: I grew up on horror movies and made haunted houses in backyards and basements with my childhood friends. Over time, my character resumé grew to include the Wolfman, a mummy, and my crowning achievement, Beetlejuice. That was a speaking part, which meant no rubber mask and a pay bump. Life was good. 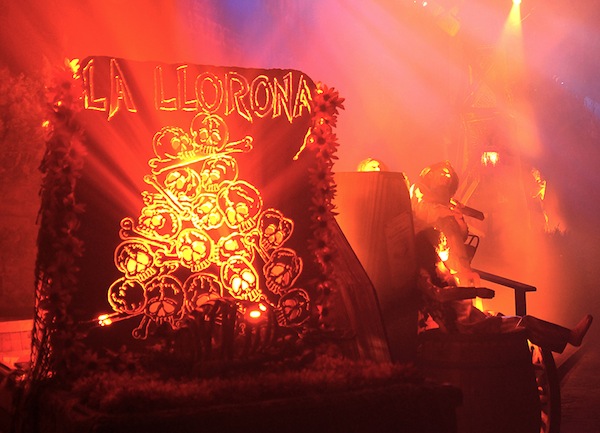 But I was getting promotions at Universal. I took off the mask and put on a tie to become a talent supervisor, which basically meant I got to babysit the Phantom and his friends. The park was growing and so were the creative opportunities. I started building props for the performers and created a few small street shows. At the time, we had a lot of classic Hollywood look-alike performers. So my job could involve finding a giant rubber fish for “Laurel and Hardy” or enlisting park guests to do a screen test with “Humphrey Bogart.”

A seed for my current work was first planted in 1996 when I saw an Ed Kienholz exhibition at the Museum of Contemporary Art downtown. Kienholz was an installation and assemblage sculptor who took found objects—car parts, broken dolls, damaged furniture—and reassembled them into works of art. He relied on a screw gun, not a paintbrush. That was a concept I could wrap my hands around. So I started to create my own assemblage work. The mixed-media artists Lee Bontecou and George Herms (with whom I took a class at the late, great art school that the Chouinard Foundation ran for a time in South Pasadena) also inspired me.

I took classes in stained glass, welding, and screen-printing. I added printed text and old photographs into some of the pieces. My goal was to tell stories with visual art as I had with the written word and, especially, to connect with an audience the way that only a good story can.

By the early 2000s, I was a part of a small department at Universal called Entertainment Production that creates special displays and events in the park. No event is more special than our annual Halloween Horror Nights, where I have the opportunity to scare up to thousands of people a night.

In addition to the usual rides, weekend nights in October feature mazes based on movies or TV shows, such as The Walking Dead, Alien vs. Predator, and An American Werewolf in London. There are also five Scare Zones that act as “warm ups” to the mazes. These productions go well beyond the bedroom-sheet ghosts, tin-foil robots, and toilet-paper mummies my friends used to set up at our houses to spook our parents. Universal’s Scare Zones are dimly lit, fog-filled streets overrun with actors (or “Scare-actors” as we call them) who have one job and one job only: to scare the crap out of you. And it’s my job to ensure that happens.

That’s where the dead bodies come in.

In mid-May or so, I meet with the event’s creative director and the head art director to hash out ideas. They oversee the creative content for all the mazes as well as the Walking Dead Scare Zone. As with the mazes, our first options are films or television shows related to the studio, which is one reason why New York Street has been overrun for the last two years by crazed mobs inspired by the Purge films. Occasionally our marketing department plays a role in the process: Halloween fans got to vote on a theme for our French Village Street this year. Sometimes I’ll do Internet searches on the history of London, disasters, notorious criminals, or ghost stories to get ideas. This year, the overwhelming favorite zone was an idea I pitched: “Dark Christmas.” Evil elves, Krampus (the half-goat demon who frightens children into being nice), and a scary Santa Claus all run amok down our version of London’s Baker Street.

Over the years, New York Street has been infested by mutant soldiers, radioactive zombies, and killer clowns. French Street has been consumed by the plague, sideshow freaks, witches, and killer clowns with a French twist (harlequins with hatchets). Baker Street has hosted Jack the Ripper, zombies inspired by the cult film Shaun of the Dead, and demonic toys like a man in a bloody rabbit costume wielding a chainsaw. As they say in the Industry, the bunny was a real crowd-pleaser.

In the lead-up to Halloween, dozens of craftspeople build sets, design costumes, and create props in a vast warehouse not far from the studio. If we can’t build something ourselves, we buy it from specialty vendors, many of whom we encounter every year at the TransWorld’s Halloween Convention. The four-day trade show has hundreds of exhibitors selling everything from simple plastic masks to animatronic creatures that cost thousands of dollars. 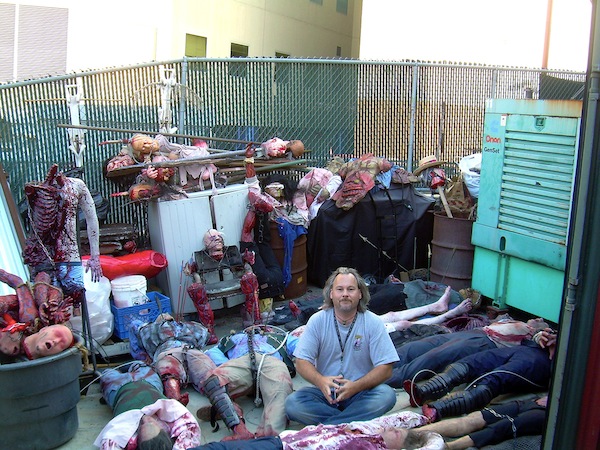 The author backstage with friends

I typically work on a much smaller scale. My budget is tight so I reuse a lot of stuff year after year. For example, I once repurposed some killer clowns into zombie hookers. Some of our dead bodies are brand new, but we also have “veteran” bodies held together with tape and hot glue. There is nothing you can’t accomplish with a screw gun, a roll of gaff tape, and a bag of zip ties.

I often work high-art or folk-art flourishes into the designs. The concept that received the most audience votes for French Street this year was “Mask-A-Raid”: a horde of cannibals masquerading as French aristocrats. I arranged French aristocrats at a massive table laden with fruits, vegetables, and human body parts in the spirit of 17th century Dutch still-life paintings and the grotesque tableaux of contemporary photographer Joel-Peter Witkin. A string quartet of skeletons is playing violins and cellos behind them.

In 2010, I created a Scare Zone inspired by the Mexican folk legend “La Llorona,” the “Weeping Woman” who is searching for her dead children. I created two large backlit metal silhouettes mounted on wagons based on the Dios de los Muertos illustrations by Jose Posada. A few years later, I converted them into an altar that was featured in a Dios de los Muertos festival at the Museum of Latin American Art in Long Beach.

Being the Scare Zone art director allows me the luxury of making stuff just because it’s cool.
But viewers move on after they see something to the next fright. I try for the opposite with the mixed-media art I create in my spare time so that viewers will linger and wonder about the story I’m telling with vintage photographs, an old desk, and scrap metal.

This year’s Halloween event is winding down. All I do now is periodically walk through to check for damage and readjust the lights. I can relax until November when it all gets packed up for next year. I plan to use the downtime to start a new piece for a possible gallery show next month.

For some reason, all of my ideas involve dead bodies.