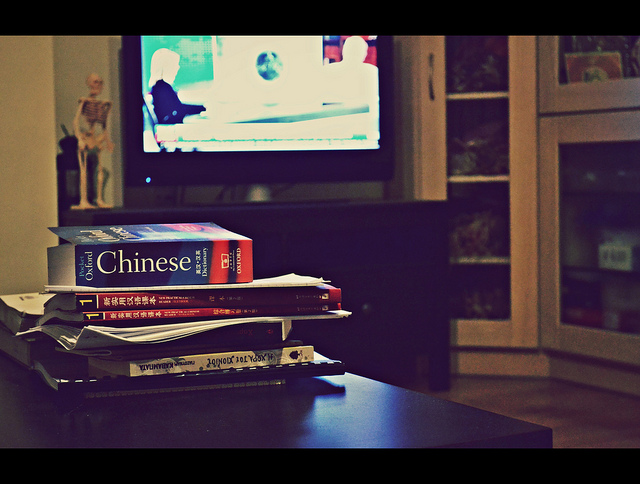 A Russian, a Korean, and a Mexican walk into a bar. How do they communicate?

In English, if at all, even though it’s not anyone’s native language. You can swap out those nationalities for any other three hailing from different continents, and the answer will remain the same. Swap out a bar for the Asia-Pacific Economic Cooperation (APEC) summit in China this week, and the attending heads of state from those three countries still have to communicate in English: It’s the only official language of the APEC, even when the APEC gathers in Beijing.

English is undeniably the language of the technologies connecting us all together. Most languages don’t even bother to coin terms for things like “the Internet” or “text” or “hashtag,” appropriating the English techspeak instead.

Mark Zuckerberg recently scored points during his own visit to Beijing when he made some remarks in Mandarin. The news sparked talk about whether China’s economic rise means Mandarin could someday rival English as a global language. Don’t count on it. Fluency in Mandarin will always be helpful for foreigners doing business within the important Chinese market, much like a mastery of Portuguese will give you a leg up in Brazil. But Mandarin poses no threat to English as the world’s bridge language, the second tongue people turn to when communicating and doing commerce across borders.

Thanks to the British empire, native English speakers are strategically sprinkled across the globe, from the British Isles to North America to East Africa to Southern Asia and down to Australia. Beyond that, it is the native language of shared popular culture–music, movies, even sport, increasingly, with the recent ascendance of England’s Premier League (soccer is the one form of global pop culture not dominated by the United States). And English is undeniably the language of the technologies connecting us all together. Most languages don’t even bother to coin terms for things like “the Internet” or “text” or “hashtag,” appropriating the English techspeak instead.

It’s little wonder that an estimated 2 billion people will speak functional English by 2020, the vast majority of them having learned it as their second language.

English, we often forget, is an inherently neutral language: There is no gender in English as there are in Romance languages. There are no class or generational distinctions baked into the language, as there are with so many languages that feature different you’s with different verb conjugations–the deferential you (boss, elder, stranger) versus the familiar you (friend, subordinate, child). Ours is a radically egalitarian and modern language, and it is simpler and more direct as a result. English also lacks the tonal nuance of some Asian languages, where a shift in tone can change the meaning of a word or phrase, or the complexity of grammatical declensions that drive students of Latin, Greek, German, or Russian to despair.

English is also more politically neutral than we often think. And any relative decline over time of America’s global power and influence will actually help, rather than hurt, the cause of English worldwide, further decoupling people’s perception of the language from their perceptions of the United States and its influence. English is associated with freedom. There is no major power systematically censoring English content on the Internet or blocking access to opposing worldviews. Even Islamist Jihadist propagandists would concede that English is a convenience in spreading their word.

The French–whose language was the last viable alternative in the race to become the world’s lingua franca–are understandably sore about the triumph of English. But even French companies have had to fall in line, accepting English as their organizational language. In what amounted to a telling parody of modern France, one grievance underlying a recent Air France strike was the airline union’s anger at the adoption of English as the default language for internal communications across its global operations.

The odds against a Chinese dialect ever gaining traction as an international language are formidable, for linguistic, economic, cultural, and political reasons. For starters, the language is just too hard for outsiders to attain fluency, at least for outsiders who can’t devote themselves full-time to memorizing thousands of characters over a number of years. Then there is the inconvenient fact that Mandarin doesn’t hold sway throughout all of China.

It’s true that China’s domestic market is becoming more important by the day, and so Mandarin is becoming more important to those who want to succeed in that market. But China’s global aspirations will make it complicit to English cross-border dominance: Its own emerging multinational companies will discover, like European and Japanese ones before them, that they have to adopt English as their business language to succeed beyond their home market.

The cultural incentives for mastering Mandarin aren’t great either. Whatever its economic and military might, China’s soft power is notoriously weak. Sadly, the People’s Republic is seen as a trendsetter in all the wrong ways–quashing dissent, blocking speech, insisting on conformity and subservience.

Indeed, resistance to any claim the Chinese language may have for global status may be strongest in the country’s own neighborhood, where nations nervous of China’s intentions are eager for continued American engagement and comfortable with English as their bridge language. Year after year, the PEW Research Center’s Global Attitudes Project surveys show that people in nations like the Philippines, Vietnam, Korea, and Japan are far more comfortable with America than with China as regional superpower. And so, again, it’s no accident that English is the only official language of the APEC and also the smaller ASEAN, the regional grouping of Southeast Asian nations.

This cordon sanitaire containing China’s cultural (and if it comes to it, military) expansion is one of the lesser-appreciated dynamics of today’s world, one that augurs well for the cause of the English language and American cultural influence. All the hype surrounding China’s rise to great power status can make us lose sight of the fact that what realtors might call the “China Adjacent Region” (let’s call it CAR)–the crescent encompassing Japan, Korea, Vietnam, Indonesia, the rest of Southeast Asia, and India–far surpasses China in population and economic power.

So don’t expect Chinese to take on English for global preeminence. That’s the good news for us as Americans. The bad news–at least for Americans thinking they don’t need to learn a second language–is that English’s very universality will make more and more of the world’s population multilingual. If all our kids speak is English, they’ll be at a disadvantage in a globalized labor force–because everyone else will speak it too. But at least we get to pick our second language.