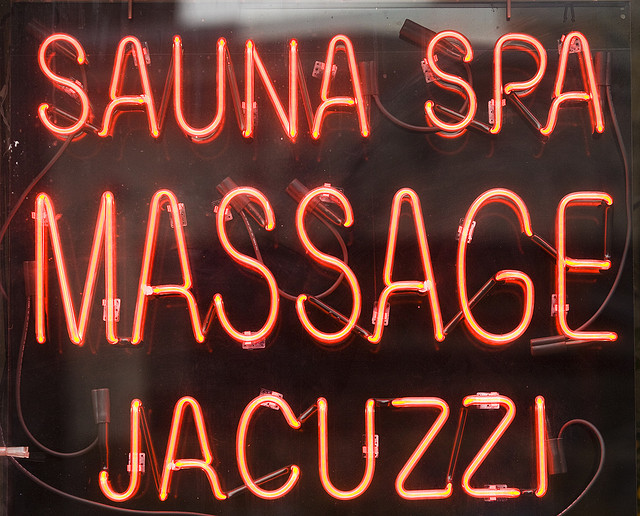 For the record, I did not intend to get naked for this column.

But the woman at the local massage parlor insisted that I remove my pants and underwear before she would put her hands on me. And so I took it all off–in order to better understand today’s California.

Judging by our streetscapes, this is a state of massage. It has become nearly impossible to drive a thoroughfare anywhere in California without encountering multiple massage parlors. Since the 2007 arrival of the Great Recession, no retail business sector has grown faster, with hotbeds in San Francisco, San Mateo, Fresno, and Sacramento and Orange counties.

Then there’s California’s massage capital, the San Gabriel Valley, where I live. The city of San Gabriel has gone from one to 53 massage parlors in a decade, while little old ladies in Pasadena can now choose from more than 100 massage parlors (that’s one for every 1,300 residents), up from nine a decade ago, according to the Pasadena Star-News. My own neighbors in South Pasadena also seem to have a lot of stress in need of relief. On a recent walk, I counted 10 parlors within six blocks of our house, with names like Massage Place, Shiatsu of Zen, King Spa, Massage Villa, Gifted Hands Therapeutic Massage, Massage Envy, and Happy Feet Foot Massage.

The city of San Gabriel has gone from one to 53 massage parlors in a decade, while little old ladies in Pasadena can now choose from more than 100 massage parlors (that’s one for every 1,300 residents), up from nine a decade ago.

In this context, some self-exposure was in order, because of how much the massage explosion reveals about the reality of economic life and governance in California. For more than a decade, our state’s policy-makers and their media cheerleaders have claimed that they are working to restore local control to California communities, even as the laws they make often do the opposite. They tout policies that supposedly restore local control over school funding or criminal justice, even though these laws come with strings attached, mostly related to money, that deepen Sacramento’s power over us.

Massage regulation is one small, but telling, part of the story. The surge of massage parlors came after 2008, when the state legislature enacted a “reform” bill to clean up the massage industry in local communities. But the law actually prohibited cities from treating massage businesses any differently from other licensed professional services, like law and medical practices. Instead, power over massage parlors was centralized in a new California Massage Therapy Council, an industry-friendly entity that handles licensing. The result: Massage parlors became one of the easiest businesses to open in the state, precisely because cities couldn’t do much to stop them.

Most massage parlors are honest businesses. But there have been just enough cases of prostitution and human trafficking involving massage parlors to make local police and communities wary of this rapid growth. The result has been conflict between municipalities frustrated that they can’t govern these local businesses and massage parlor owners, many of whom are struggling to eke out a living.

This September, under pressure from cities, the legislature gave municipalities back some power to shut down massage parlors that don’t obey local rules. But the legislation also kept the Therapy Council in place. So massage parlors should remain a prominent part of our landscape for quite some time.

In recognition of this reality, I decided to find out firsthand what goes on in the massage parlors in my neighborhood. Having never had a professional massage before, I was a bit wary. But on a recent weeknight, I walked one short block to a parlor less than two blocks from my house.

It had a sign touting “Asian Therapy” and a neon sign that reads “Open Massa” (the last two letters, “g” and the “e,” having burned out). Blue lights ringed a storefront featuring a small wooden chair and cotton clouds arranged in front of a poster of a beach.

Inside, I gave my name, explained that I intended to write about massage, and asked to try a half-hour massage. A woman told me that would cost me $35 and led me into the dimly lit rear of the store, where there appeared to be five small rooms along a long hallway. I was left alone and instructed to disrobe. When the woman returned and saw I had kept my pants and underwear on, I was told that nudity was essential to the massage experience.

Once I was properly naked, the woman turned on new-agey instrumental music and instructed me to lie facedown on a table, with my nose and mouth placed over a hole so I could breathe. A sign on the wall informed me that police could conduct surveillance of the room at any time. She placed a towel over my rear end and then began to rub my entire backside, from my neck to my feet, along the way applying an oil with an odor I could not place. Then she asked me to turn over and massaged my front, from shoulders to ankles. I tried asking her questions, which she mostly deflected.

What kind of massage is this? I asked

Swedish and Chinese, she explained.

It was nearly 10 p.m., and I had nearly fallen asleep when she declared that my half hour was up. I stood up to get dressed and go home—but then the upsell began.
You really need an hour to do this properly, she said. And you need to experience the full menu of services.

Go ahead, I said with a sigh.

She wanted me to try hot stone therapy, but I balked when the first stone she put on my back burned. Then she offered to “walk my back” to bring additional pressure to bear on my sore muscles and spine. To this I agreed.

I might have ended the session then, but I no longer had enough oxygen to speak. A few minutes later, it was over. As I walked out, I encountered the only other customer I saw–a middle-aged Asian man wearing a lonely look. The extra half hour had added $20 to my bill, making the total $55, and my masseuse pressed me for a tip. I gave her $10.

She also handed me a pink membership card. After five more services, I’ll get one free. I still have it in my wallet, but I don’t plan to go back. At least until my local city council has the power to protect me from anyone walking on my back.