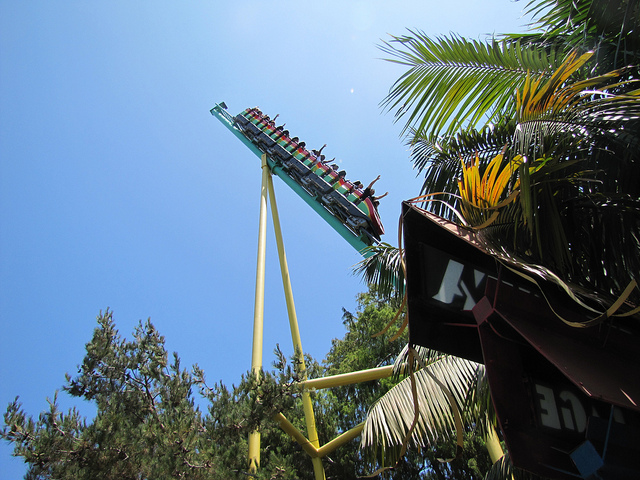 Many of my middle-school memories feature my cousin Efrem scooping my brother Adam and me up in his ride and taking us to Knott’s Berry Farm in Buena Park. Those were the best summers of my life. My mother had held my hand during the Camp Snoopy days when I was too short for many rides, so my trip con mi primo Efrem signified transition, a rite of passage.

With him, I bolted to Montezooma’s Revenge, a graduate-level ride. I was fortunate enough to be taller than the red line they make you stand against to measure your height. The riders who didn’t make the cut were asked to step aside. Their getting shot down on a technicality didn’t bother me then. Later, I thought about that red line every time I encountered a situation where I felt I’d come up short.

When I was 20 years old, I transitioned from civilian to soldier. Many a night throughout basic training, I went to bed with a lump in my throat, wishing I were a civilian again, wishing I had never stepped into the recruiting office that day. But in 1996, my mother flew out of LAX to Fort Jackson, South Carolina to see me graduate basic training and head off to Military Occupational School in Fort Lee, Virginia. Four years later, I left the service (honorable discharge, I’m proud to say) and ran a route at the now-closed uniform company Cintas in Long Beach, California for three years before moving on to Puritan Bakery in Carson.

I was fortunate enough to be taller than the red line they make you stand against to measure your height. Later, I thought about that red line every time I encountered a situation where I felt I’d come up short.

During the interview at Puritan, the lead supervisor asked me if I’d ever driven a step van with a manual transmission. I hadn’t. I was just shy of the red line. He said he needed a driver by the following week. Could I learn by then? I said yes. I remember thinking I’d never learn to drive stick-shift in time. But I did. I drove for Puritan until a DUI in my own vehicle ended my career as a route driver. Even though I haven’t spoken to anyone down at my old place of employment, I’m thankful that man, as well as the rest of the supervisors over there, was willing to let me through the turnstile despite my being under the red line.

When I was 30, I went back to school. I encountered the red line again. Sometimes I was tall enough; a professor at Cal State Dominguez Hills once shook my hand and said, “You nailed it,” in reference to a final paper I had written. Sometimes, I wasn’t. At Harbor College, a professor slapped me with a bad grade in a political science class. I wanted to run back to Camp Snoopy. But I managed to make it through university. Barely, but I managed.

My recent transition from undergraduate to graduate student in English has not been smooth. Abstracts, annotated bibliographies, and researching secondary sources can make me feel like I’m below the red line. I knew how to march. I knew how to replace a mop head. I knew how to slide trays of wheat, white, rye, and hamburger buns into bread racks. I didn’t have to know Shakespeare, Chaucer, or Milton. I didn’t have to analyze scholarly texts. I worried about knocking out four stops–that’s driver-speak for deliveries–per hour, not understanding the author’s intent in a canonical work. But I’m in too deep now. If I quit and go back to the warehouse, I’ll never be able to tell anyone that I survived the academic version of Montezooma’s Revenge.

The gatekeepers at California State University, Dominguez Hills are not like the gatekeeper at Montezooma’s Revenge. Sure, I got a “C” in Shakespeare, a “D” on an annotated bibliography. But they tell me to suck it up and drive on. They tell me to adapt and overcome. Back at Harbor College, the late Dr. Borell gave me an “F” on an assignment. She told me to rewrite the paper. I was too short to ride, she said, but she let me through the turnstile anyway.

My brother Adam, younger than me by 13 months, passed the academic red line before me and showed me it was possible. After he graduated high school with honors, he matriculated at University of California Berkeley. He was the first member of my family to go to university. Neither of my grandparents went to high school—Grandpa cured telephone poles at a lumberyard, and Grandma cleaned fish at one of San Pedro’s canneries for almost 40 years—but they encouraged Adam and me to get an education. We needed the encouragement. I had planned on being a blue-collar man after leaving the military. My brother could’ve been a blue-collar man himself. And there would’ve been nothing wrong with that.

But a math teacher at John Marshall Middle School in Long Beach—a gatekeeper—asked my brother, a Mexican-American kid getting a “C” in math, if he’d be interested in applying to the California Academy of Mathematics and Science at California State University Dominguez Hills. Our mother stayed up all night helping him construct a model of a virus for a presentation, and then woke up early to go to work at the now-closed Pacific Electricord on Redondo Beach Boulevard in Gardena. Our mother could not speak the language of the academy, but, like Prometheus, she wanted her son to have the knowledge the university offers. She couldn’t bring the sun’s light to him, but she could point him in the right direction.

Thanks to that man at John Marshall Middle School and our mother, my brother went to the academy and to college. Now he’s chair of the math department at Fleming Middle School in Lomita. He knows many of his students are too short against the red line, but he doesn’t tell them they shall not pass or ride. Instead, he tells them to run through the turnstile full steam ahead.