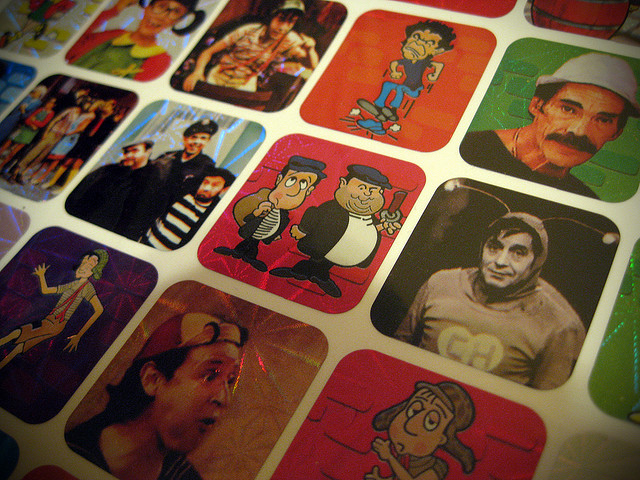 Latin America’s “little Shakespeare,” or “Chespirito,” the most famous TV personality ever in the Spanish language world, died late last month. The only dispute surrounding his towering legacy is over which one of his two iconic characters—“El Chapulín Colorado” (the “colorful grasshopper” superhero) or “El Chavo del Ocho” (the homeless “Kid of number 8,”)—was more popular. It’s a close call.

I grew up watching Chespirito’s shows in the 1970s (my father played a minor role in launching him as an executive at fledgling Channel 8, the first station to carry him, which explains the 8 in el Chavo’s name). My friends and I quoted the shows incessantly and turned to their archetypal characters for nicknames to bestow upon our classmates. El Chapulín and El Chavo also provided us with laughs, a moral compass, and quintessential “everyman” Mexican cultural heroes to offset gringo influences.

I am not surprised at the extent of the mourning for Roberto Gómez Bolaños, aka Chespirito, whose shows still air throughout Latin America more than 20 years after he ceased taping new ones, despite their primitive production values. If Latin American intellectual elites lost their most vaunted storyteller earlier this year with the passing of Gabriel García Marquez, everyone lost their most ubiquitous storyteller with the passing of Chespirito. There were no educational, class, ideological, or generational distinctions when it came to adoring Chespirito.

The timing of Chespirito’s passing seems especially cruel to a Mexican society reeling from this fall’s state-sanctioned killing of 43 teachers’ college students in the state of Guerrero, and from constant revelations of corruption and impunity among the powers that be. Chespirito’s characters oozed decency, and decency is what appears to be in short supply these days in Mexican public life.

Every episode of Chapulín Colorado started with a moment of peril in which the victim would exclaim, “O, y ahora, quién podrá ayudarnos?”(“Oh, and now, who can help us?”). Mexicans are asking themselves that very question right now, and there does not appear to be a ready answer. Certainly no bumbling superhero in red tights is materializing to set things right, exhorting folks with his “Síganme los Buenos” (“Follow me, you good people”) call or his triumphant “No contaban con mi astucia” (“You didn’t count on my astuteness”).

My favorite Chapulinism–a quote that has never failed me when the going gets rough–is “Que no cunda el pánico.” It’s a humorously awkward phrasing of “let’s not panic,” though I am worried that this is what many Mexicans feel on the verge of doing. Watching news coverage of the tens of thousands bidding farewell to Chespirito in his characters’ costumes at Mexico’s largest soccer stadium, I couldn’t help but think there is no one from the country’s political world who could ever elicit such an outpouring.

It’s a close call, but El Chavo del Ocho may have been even more beloved than Chapulín. The kid with no name, played endearingly by Chespirito in his 40s and 50s, wore a dirty striped shirt, suspenders, and a trademark cap. He lived in a barrel in the middle of the courtyard in a classic “vecindad,” or neighborhood, that implausibly housed families of varying social classes. El Chavo was the happiest kid there, and the dignified moral center of the community, always trying to do right, but often falling short, misbehaving “sin querer queriendo” (without wanting to want to). Somehow the community cared for him, without ever really trying to alter his circumstances.

The wise authority figure of the ensemble, commanding unquestioned respect from everyone, was “el profesor Girafales.” A schoolteacher, Girafales can be seen as a stand-in for the state, then a fully owned subsidiary of the autocratic PRI political party. Back in the 1970s and early 1980s, the powerful Televisa network that went on to air Chespirito’s shows at the height of their popularity was the chief propagandist for the PRI and the glories of the stable Mexico it had forged from revolutionary upheaval. The network’s newscasts were mocked and reviled almost as much as Chespirito was beloved. El Chavo and Chapulín, mainly aimed at kids but watched by everyone, did not engage in political commentary or satire. If anything, their anodyne themes of decency, harmony, and social cohesion among people of different backgrounds fit in well with the state’s heavy-handed paternalism. It’s a shame, though, that Chespirito’s inherent decency couldn’t have made more of an impression on Mexico’s corrupt political culture, as it did on his millions of viewers.

Gómez Bolaños was a prolific writer for other comedians in the 1960s (hence the nickname “little Shakespeare”) before he tried out for one of the roles he’d written. Just prior to creating El Chavo and Chapulín, he was determined to launch a show called “El Ciudadano Gómez” (“Citizen Gómez”), in which an ordinary citizen would take it upon himself to help people solve their problems and become more involved in their community. A few episodes were taped, but by all accounts they weren’t all that funny, certainly nothing like El Chavo or Chapulín.

That’s a shame, in a way. El Chavo and Chapulín have enriched generations of people in dozens of countries. But the role model Mexico could really use is of a decent, ordinary citizen who gets involved to change society for the better.